Kids want to go back to tornado church

Dang you guys I think of so many funny stories during the day and way back when when the kids were small enough to nap I would just slap them into hysterical blog posts practically every afternoon. Now I just laugh to myself and get weird looks when I am in class. Or in line at the grocery store. I am always in one of those two places.

I did manage to take this picture of our front porch and send it to our long-suffering realtor with the caption "Staged the front porch!" 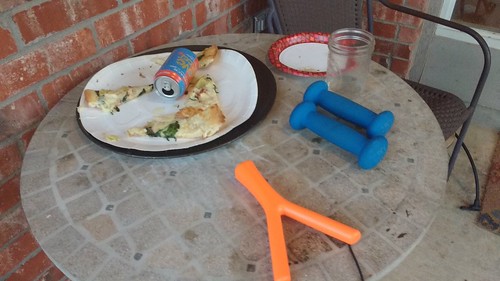 I continue to delight (no) and annoy (yes) real estate professionals. This time he is one of our good friends though, so the pressure is really on to not act too much like an imbecile. I'd say I'm hovering at right about 80-20 in that department, which is an improvement. It is definitely a twist seeing my friend, on whose floor James once fell asleep halfway through eating a hot dog, in professional mode, but it's kind of awesome. Who knew we were all grownups?

In other news, two Sundays ago I was walking out the door to go to church and looked at the radar to see an absolute beast of a squall line headed straight for us. It was dusky dark at nine AM and the air was weirdly thick and humid. I joked around on Facebook that whoever was stuck with me in the tornado shelter at church better get ready for a cuh-razy sing-a-long, but I really wasn't expecting anything to happen, which is why I was all laughy-jokey about it. This is often my downfall. We sent the boys off to Sunday School right when we arrived and then dropped Mary off at her room and we had just walked into the part of the building where our class meets when THE WEATHER RADIO ANNOUNCED A TORNADO WARNING.

I sighed. Part of me loves an emergency but another part of me was really looking forward to getting a donut and zoning out at the back of my Sunday School class with my friend Rosa.

Two other friends who are on staff with the children's ministry were headed straight for me in the hallway and we immediately began evacuating the kids from the second floor down to the hallway in the center of the first floor where there were no windows.

I felt like I was being kind of a drama queen, but it was a tornado warning and we were in charge of dozens of kids and I couldn't see it on my phone radar, but the velocity image and reflectivity image were NOT TOO SHABBY for Central Texas and we really did do the right thing.

It was kind of chaotic getting everyone down the stairs, but once we assembled them on the floor and sang some songs all was peaceful. Ryan went to check on Mary and ended up helping take all the nursery kids and three year olds to another (safe) part of the building, where I am told they have emergency backup lighting (this will be important later).

We ran out of songs to sing so I grabbed a book at random from one of the classrooms and tried to find something to read to the kids and that's when I realized that ALL BIBLE STORIES ARE KIND OF TERRIFYING.

I just started at the beginning, though I'm not sure the middle of a potential tornado situation is the ideal setting to contemplate the Fall of Man.

When we got the all clear we started shuffling all the kids back upstairs. When we had ALLLLLLL the kids either in the stairwell or in a line behind the stairwell, THE POWER WENT OUT, and it was PITCH BLACK.

The kids thought this was incredibly exciting. Imagine fifty excited kids in a cinder block stairwell, IN THE DARK.

Charley's class got to play Uno by candlelight. 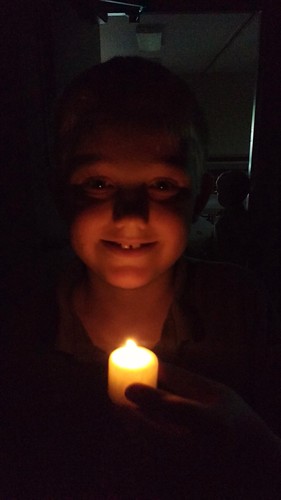 Everyone was finally back in their classrooms (still in the dark) when a friend who is a fireman came over to tell us that there had been a law-enforcement tornado sighting and that we should go back downstairs (The radar was saying otherwise, but there was a lot of confusion and they had already evacuated the sanctuary, so we went for it). Once we got downstairs we decided to stick it out until all the parents got out of big church and came to pick up their kids.

Later I would learn that the sanctuary ALSO has backup lights and that they had no idea that we were sitting in pitch black darkness with fifty children. 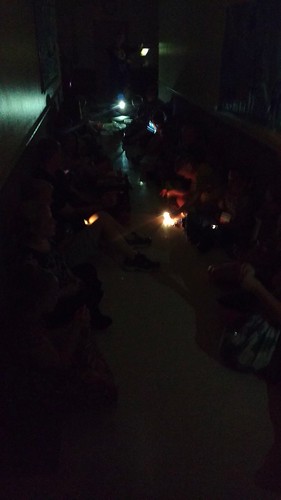 There is power in His name, just not the electrical kind.

Which is why they took their time finishing up communion and singing extra verses of all the songs. We were down there FOREVER. Ryan and I ended up taking two extra kids to big church with us, which meant we were in charge of six kids for the entire service, including Communion (Wes's buddy A asked me "can I go get seconds?"). The kids loved sitting with friends, the service was relaxed and casual, and the power eventually came back on.

And just like at the end of Twister, when we got outside at the end it was pretty and sunny again. Crazy!

So now you're all caught up. Tornado church. Classes are almost over. We're about to buy a house. And sell a house. And move. Lots to complain about there!
Posted by Becca at 7:46 PM