Work on plan "Movin On Up (slightly north of where we are now)" continues to occupy every spare moment of our time and energy. This weekend, since it was nice out and we had an extra day off, we decided to spruce up the landscaping to give the house more curb appeal. This sounds so simple when you don't consider that we are working uphill against nine years of deferred maintenance. I did the front flowerbeds, which sounds like an easy enough girl-job, but it required gloves, multiple trash bags, and a twelve inch metal spike. And also about four hours of time.

Ryan did the back garden, which was considerably more difficult. When he got around to the side yard, where we have at least six six-foot tall "volunteer bushes" that have grown woody trunks, he decided to go rent a chain saw. He also fixed the hole in the fence that the kids used to use to get into our back yard from the non-gate side. It was hilarious to sit on my neighbor's driveway with them and watch kids run back to where the fence hole was and then turn around and come back out to go around, disappointed. Sorry kids, the slob neighbors are moving!

Friday after we went to Whataburger for lunch and to Home Depot to buy some more plants to replace the Jumanji-style ones we were taking out, we stopped by the new house to remind ourselves why we every thought this was a good idea in the first place. 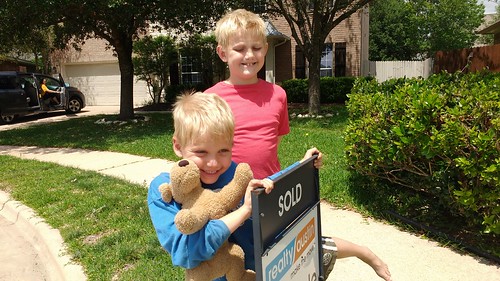 Saturday morning the kids thought it would be fun to watch TV and bitch about not being able to find the remote while Ryan and I were ripping giant weeds out of the backyard. They quickly learned that if they couldn't solve this problem without our help, we would be happy to find a alternative activity for them. 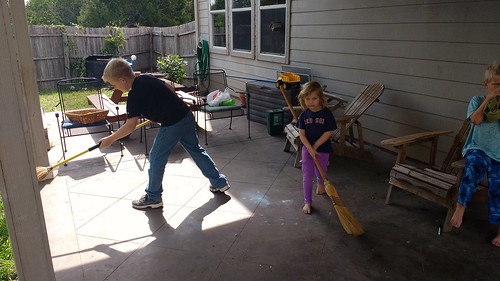 Sunday was Easter! There are no photos of the egg hunt because no one had any clothes on. But they cleaned up nice for church! 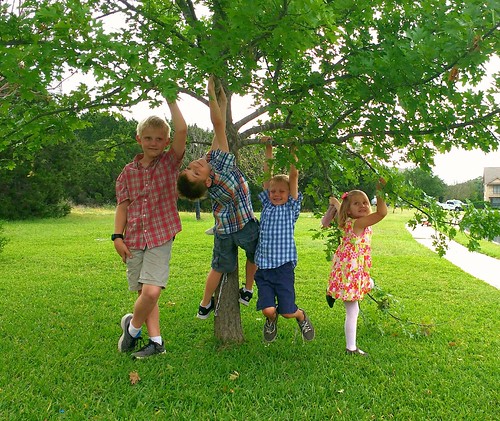 I asked them to get closer for another picture. 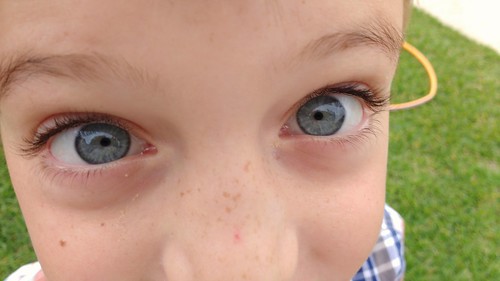 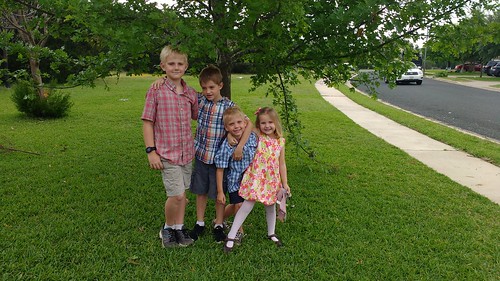 We went to church, which was nice. And then to my parents' house for brunch. They had a great easter egg hunt (the tradition is to put socks in the easter eggs and the kids were SO EXCITED about it all day). There were crafts and so much delicious food. My cousins were there and my aunt and uncle and my sister. All the kids disappeared outside in a loud mob, we laughed and joked and helped my mom in the kitchen.

Right before lunch, Charley came in from playing outside, complained about his ankle hurting, then hopped on one foot to the couch. He can be kind of dramatic, so I made him an ice pack, picked up my IPA, and went back to the party. When it was time for us to eat I called out "Charley! Lunch! You can make it to the table!" then I went and sat in another room to eat at the adult table. This is called building character. He had hopped back to the couch with his ice pack by the time we were all done eating and that's when I noticed that hmmm, does his left ankle look massively swollen to anyone else? I asked my cousins how he had fallen, if it had really been *that* bad. They said they didn't think so, but I made him an appointment with urgent care for yesterday evening and we left rather abruptly to make it there (a decision which probably saved us $500).

In the car on the way there I remarked to Ryan "Don't worry, sweetie, we'll just throw another few dollars on the money pile!" He responded unhappily "Don't you mean a money *hole*?" I chirped "The pile is on FIRE!"

Ryan pulled up to the entrance and Wes got Charley a wheelchair while I checked us in. By the way, pushing Charley in the wheelchair seemed to give Wes the sense of agency he needed to stop verbally abusing James, which is how he had spent the rest of the day. 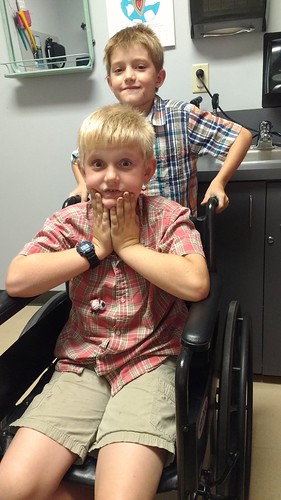 The doctor came in and confirmed dryly "Yep, it sure is swollen. Probably fractured. Take him down to x-ray." I love a doctor who cuts right through the shit.

The doctor and the radiologist both couldn't see a fracture, but they put him in a boot and gave him some crutches and said to see if he can walk in four or five days. On the advice of our friend, a podiatrist, he has an appointment with a different podiatrist tomorrow to make sure. Given how the thumb thing went down this fall, I fully expect to be told that it is fractured, but I am told that regardless of whether it is fractured or sprained, he will be in the boot for at least a month. This is exciting news, as I'm sure you can imagine, given that we are also trying to MOVE TO ANOTHER HOUSE right in the middle of that timeframe and that he is ACTUALLY USUALLY QUITE HELPFUL. Not to mention the whole pool thing and the fact that I had planned to send them to Y camp during summer research and obviously *that's* not going to work if he's in a cast. Such a bummer.

We'll figure something out. Something is probably a nice quiet Lego engineering camp and some quality time with grandparents. Also I told him we could learn to make slushes and would float him out to the middle of the pool on an innertube with a slushie this summer if we had to. I am doing my best perky cheerleader WHAT A FUN ADVENTURE thing, but dang you guys. This is not ideal.
Posted by Becca at 7:35 AM

Also, "this is not ideal," is my favorite "this is going to shit" euphemism phrase. It makes even the worst situation sound so genteel and surmountable. Even if you say it in all caps or top volume, a part of my brain is like "ideal? why yes, it just could be!".

Hope his ankle heals well and quickly and is back to ideal soon!

Giving Wes the sense of agency he needed line SLAYED me. That's exactly how Jack and Cooper pass the time too.

That sounds absolutely terrible. On the plus side, swim camp may not be completely out, as for a few bucks extra you can probably get a waterproof lining for the cast! Good luck!