To borrow a line from OITNB: Marry someone who knows when to order Chinese

This weekend was so insane that after church we came home and had what we call FOB, which is an old camp term that stands for Feet On Bed. I nobly tried to make it through the front section of the New York Times before joining Ryan, James, and Mary upstairs for a two hour coma of a nap while the other kids did whatever they wanted downstairs as long as it wasn't loud enough to wake me up.

(Charley told me that instead of FOB he was going to have FOC, pronounced dangerously close to f***, and when Ryan and I looked at him in alarm he calmly said "Feet on Couch", then smirked and skipped out of the room)

Afterward we spent some time cleaning up the back yard and bought Chinese takeout for dinner. So aside from the THREE church services we had to go to this morning, it was a pretty chill day.

Thursday night my mom group came over and I provided wine and entertainment in the form of assembling an Ikea bookshelf that we are using to store the kids' rollerblades and shoes. 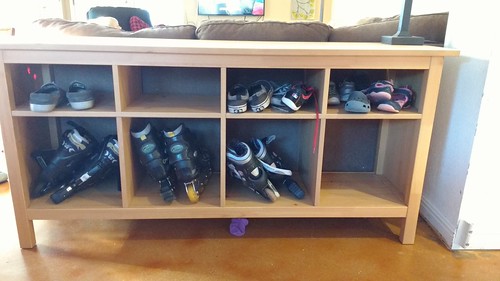 Unanticipated side benefit: I can now reach my wineglass from the couch without so much as leaning over, like I had to do when I was using the coffee table.

Friday the fourth graders went on a field trip and the night before Charley was so excited he couldn't sleep so he stayed up with the ladies and helped with the bookshelf. As a result we came home straight after school and he vegetated on the couch while Mary and I did puzzles on the porch and Wes and the kid from around the corner rode bikes up and down the steep sides of the retention pond across the street. Mary took frequent twirl breaks. 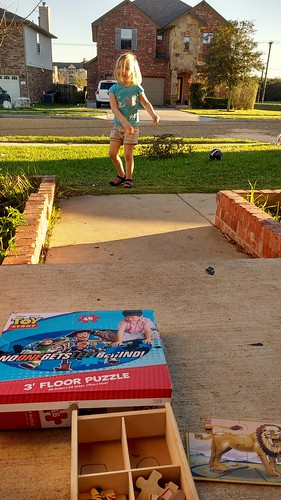 Saturday Ryan's parents came over and we had lunch at a restaurant, which we left abruptly when James returned from the bathroom and announced calmly "I feel like I'm going to barf." Then we spent the afternoon making fondant and making approximately seven hundred snake cupcake toppers that I really should have taken pictures of but did not. 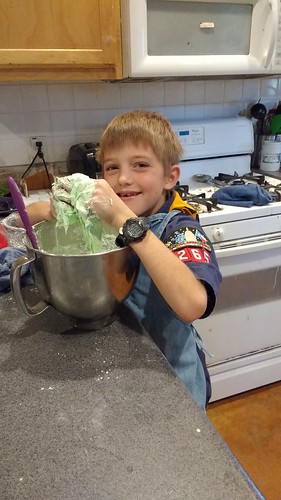 And then we went to the Cub Scout Blue and Gold, where is the end of year banquet where the kids earn their rank. Ryan is the Cubmaster and was in charge of the whole thing. It was SO cool. The kids had a great time and were so proud and cute in their uniforms. Unfortunately I forgot my phone, so I am waiting for someone I know to send me some pictures of the kids. Charley and Wes won the dessert contest in their categories and Mary ate four cupcakes.

I got a little verclept when Charley's den had to go up on the stage at the end to retire the colors because that's when I realized that HE was one of the biggest kids of the pack now. His den is the leaders and it is his last year in Cub Scouts. Give me a moment, I can't talk about it anymore.

We got home around ten and went to bed then had to get up early and get to church by 8:15 where the kids were playing piano for Children's Sabbath. Wes played the prelude and Charley played the offertory and led the Call to Worship. BIG KIDS DOING BIG KID THINGS STAAHHHHP. 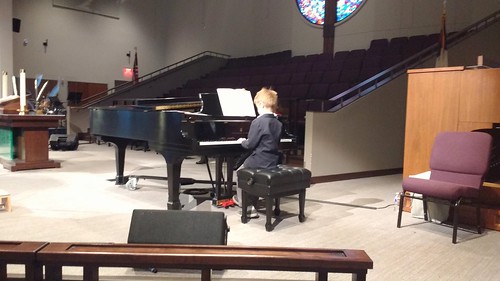 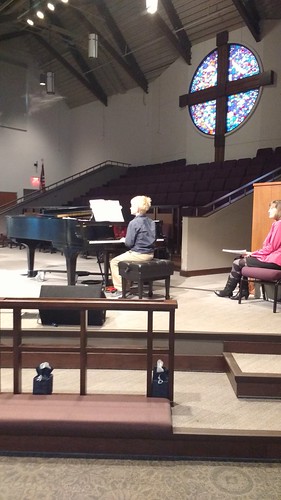 They were amazing. Really amazing when you consider they'd been up until 10:00 cleaning up a fajita dinner in a church fellowship hall across town.

All of the kids sang with the children's choir at the following two services, so we had to stay for those too. Charley was kind of a wreck after the first service and a half and I really really really wanted just go home because DAMN. Breakfast tacos and donuts made us all feel better and we managed to get through the third and final service. I love the children's choir so freaking much.

And then we went home for a lunch of leftover hot dogs and had a group nap for two hours. A glorious end to a completely insane weekend if you ask me.
Posted by Becca at 7:14 PM

I love that title quote. It reminds me of when James got home on Tuesday night after Landon had been stuck in a tree for an hour and was silently stewing on the couch, a mass of cuts, bandaids, and resentment (at what I have no idea; gravity? broken tree branches? his own inability to listen to our nanny tell him to STOP CLIMBING ANY HIGHER), the girls were playing quietly in the playroom because they can read a room, and I'm furiously stirring soup with a very large glass of wine inches away -- he paused, lingered on all his family members, and came over and hugged me. No words. No attempts to drill down to what was going on. Just, you clearly need a hug and I will not second guess any of the silence + wine that is happening here. We got good ones.

Mary is so big!! Like one of the kids big. What happened to our babies?!