She really is a delightful child

After a crazed week of frantic work and frantic runs to pick up the kids and frantic everything and one horrible day of allergies where I had to push on my sinuses with the heel of my hand to keep the violent sneezing at bay long enough to conduct a meeting with my research student (update: I took three kinds of allergy and cold medicine and two glasses of wine and went to bed then woke up feeling amazing #donttrythisathome), I just finished my last class for the week and feel like Fred Flinstone when the whistle blows on the opening credits.

Ryan continues to meal plan and shop, which is excellent. He planned for these veggie burgers from Pioneer Woman Monday night and they were SO GOOD (we had them as sliders). And so easy. Apparently he also bought some hamburger to make regular sliders for the carnivores in the family, but I didn't know that and made a double batch of these because we always have a couple of extra cans of black beans kicking around. An easy and surprising crowd pleaser! Way cheaper than premade veggie patties too! 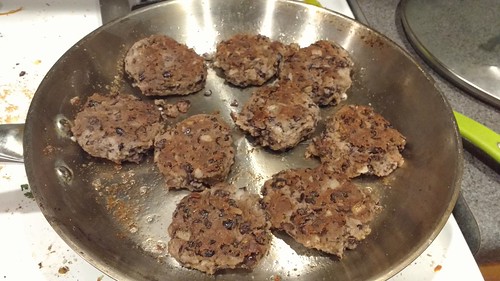 Tonight we are having a chick pea curry with a side of chicken kabobs that I plan to broil because I'm a grown-ass woman who is afraid of the grill.

On Wednesdays the big kids go to choir with Ryan and Mary and I stay home to watch flashmob and Jimmy Fallon lip synch videos on YouTube. Mary is particularly fond of a group of bikini clad women dancing and singing on a street corner in Germany. She also likes the Jimmy Fallon-Emma Stone video that went viral a while back, which she calls "the one with the boy and the girl but not the one with the hat." She has excellent, if age-inappropriate, taste in YouTube fare.

I tried to sneak some ice cream while she was occupied with her magnatiles. Unsuccessful. 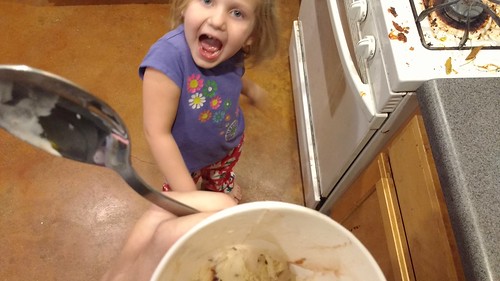 (Our stovetop really is that appalling)

And as I made my go-cup of coffee this morning I was struck by this poignant scene in the sink. They may wear pants that a freshman sorority girl could squeeze into, but they're still my wittle babies with their colorful plastic dishes. 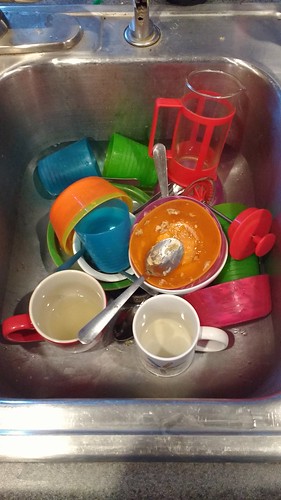 Except for Charley's French press, obviously

In other non-hippie news, Mary is sleeping better than ever now that she doesn't have the temptation of three siblings and an entire upstairs of books to destroy. This has translated into a 6000% (estimated) improvement in her mood and attitude. Not once this week has she screamed "I DON'T WIKE THIS" and thrown her plate at me during dinner, something that used to happen with embarrassing regularity. As a result of this and the fact that I can actually sit down at 9:00 without making forty-five trips up and down the stairs to put her back in her room and make all the other kids stop yelling and get back in their beds, I feel like I might just survive this phase of my life without my basal ganglia melting and running out of my ears. Take that, hippies.
Posted by Becca at 10:27 AM

Yay! I am OFF DUTY at 7:45 when the little kids go to bed, and I don't care how many times they beat each other senseless in their room (I mean, that's an exaggeration), and it's wonderful. I will sit on the couch and shot "Go to sleep right now or else!" but that is the extent of my parental involvement from that point on. It's liberating.