Sunday afternoon we went to Chipotle for lunch and then I took the kids to a playground in our old neighborhood while Ryan went to the grocery store. When we got to the playground I was delighted to see a throng of organic-cotton wearing children and heavily tattooed, hippie parents of the type I usually see only when we venture down to the fancy playground grocery store.

Wow. I thought, This neighborhood is way cooler than I remember! Maybe we should think about moving back over here.

I took the kids to the bathroom like fourteen times then settled in for some idle phone checking while they folicked in the unseasonably warm eighty degree day. Then I overheard a woman talking to her friend about vegetarian recipes--apparently the neighborhood hadn't gotten cooler, I'd just stumbled onto the monthly gathering of the neighborhood vegan potluck group--so I struck up a conversation (Charley has recently given up meat, which is fine, but means I am always looking for recipes).

Somehow the conversation came around to child rearing, as it always does in these situations, and she intimated that she has trouble getting her three year old to eat what the rest of the family is having for dinner (a three year old vegan). She asked me "You have four kids, what's that like? Do you have to make a lot of different choices?"

She nodded along with what seemed like admiration. High on the sense of approval, I continued talking. Talk talk talk. Somehow we got on the subject of bedtime. I told her, "Ha! Yeah! Three year olds are INSANE! I just had to buy a doorknob guard to keep mine from wandering out of her room at night, putting on her Elsa dress, and painting with watercolors in her brother's closet and spilling a giant tumbler of paint water all over the floor!" (note: THIS REALLY HAPPENED)

"A what?" she asked kindly?

"An Elsa dress?" I asked, stupidly.

"No, the other thing. For the doorknob?"

"OH, yeah. The doorknob guard. You know, one of those plastic things you put on the doorknob so the kid can't open it. It just kind of goes pbbbth pbbbhth" (miming a plastic thing spinning around and around a doorknob like some kind of child-hating monster.

"Huh" she said noncommittally and then exclaimed "Oh! That reminds me that I need to look on Craigslist for another Elsa dress. My son wears his all the time and it's getting kind of worn out."

But the moment was over. She busied herself with Craigslist and asking her son if he'd like the red wig with the braid this time or the blonde wig. Charley sat down between me and the lady on the bench and I engaged in what I now realize to be a war of hippie buzzwords, to regain my lost credibility.

Shrieking "REMEMBER WHEN I USED TO PUT YOU IN ORGANIC COTTON PREFOLDS AND BUMMIS WHISPER WRAPS* AND TOOK YOU TO LA LECHE LEAGUE MEETINGS WHEN I WAS IN GRAD SCHOOL!" would not have been subtle enough.

*this is a secret cloth diaper code for those of you who use disposable diapers (like me, ahem).

"Hey, Charley--I mean WOLF! Should we go home soon and plant the rest of the GARDEN?!" I asked, slightly louder than necessary. "I bought some more COMPOST at the LOCAL nursery yesterday."

I smiled at him like an insane person, which I guess I am because I lock my kids up at night like Petunia Dursley.

When he agreed, I continued. "Should we plant SQUASH? KALE? MAYBE SOME YUUUUMMMMY RAINBOW CHARD?!"

"And don't let me forget to water our compost bin, and remember to put more greens in, OK?"

I should have added "Oh dang, we are out of KOMBUCHA again."

But instead it was time to go, so I used my best earth-mother voice to tell each child individually and at his level that it was time to go get in the car. This worked as well as it usually does which is to say not at all so in the end I just threatened to leave the last straggler there and to hell with hippie street cred.

Charley did me a real solid, though. 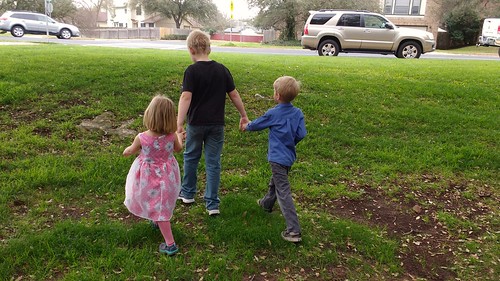 Oh man! Sorry we missed you. We were too busy being yelled at by the resident put-your-dog-on-a-leash police because my dog's leash was too long...

Ha! I love this so much! I had my first in Portland (his favorite food was hummus) and my last in suburbia. I'm not cool enough for any circles. It's like buying your kombucha at Target.