All Dressed Up and Nowhere to Go

I just got back from four days in Seattle last night. I was at a conference and now I'm all fired up and motivated, so this morning I jumped in the shower right after the kids left to get ready for a meeting, put on a nice-ish outfit for a Friday, then went downstairs to finish prepping my draft of a publication we're working on only to find out the meeting was cancelled. So don't I feel silly sitting at my kitchen counter on a Friday morning all ready for work! (Fridays are not blowdrying days, it goes without saying) 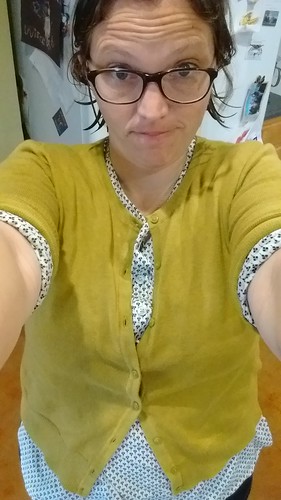 But the good news is that I can spent the two hours I would have spent in the car and walking to the car and parking the car (WHYYY don't we have better public transit?) to write this and hopefully make a little more progress on the draft so I don't have to go into the meeting next week with a bunch of (REF!!!!!) and (FIX THIS SENTENCE IT'S TERRIBLE) notes to self embedded in the text.

I only took like five pictures in Seattle and this is one of them. 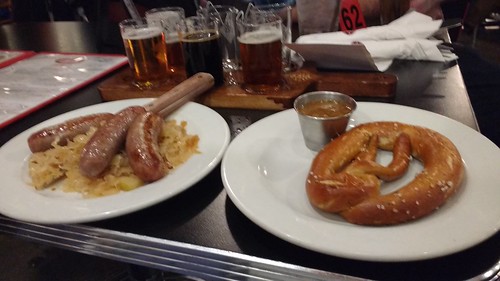 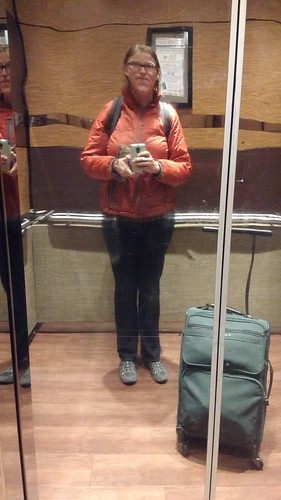 Oh! I got to see Mount Ranier from the plane and it was seriously awesome. Also, shout out to Mount Ranier for doing me a solid and not erupting during my visit. 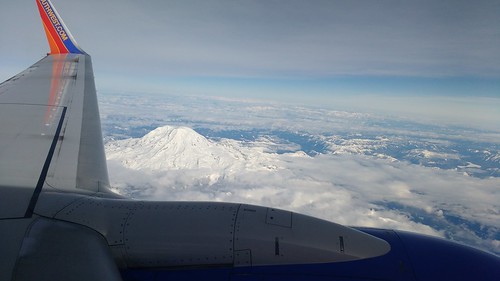 On the last day I was in town I serendipitously learned that my aunt and uncle were also in town and we met up for dinner and a driving tour of the city. We had so much fun eating Lebanese food and seeing the giant troll! 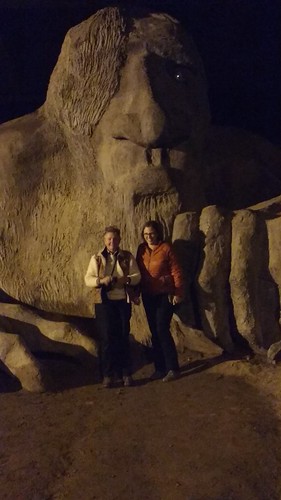 I stayed with my official conference roomie Teresa and we had ridiculous fun together as we always do on our science girls' weekend. It was nice to wake up in my own bed this morning but I'd be lying if I said I didn't miss waking up to Teresa brewing us both coffee to drink in our beds as we enjoyed the view of the freeway (foreground) and the Cascades (background) out our hotel window. Seattle is a great city and I wish I could have spent lots more time there, and not just because it was described to me by my friend N as "A town that loves coffee and beer." Also because it was gray and cloudy and cool the whole time I was there. I'm giving Ryan a few days to recover and then I will restart my campaign for MOAR TRAVEL because I seriously love it. I'm so lucky to have visited New York and Seattle this year, but what I would really like is to drop everything and spend the year taking the kids to ALL THE PLACES.

My student presented a poster based on our work from this summer and he did a great job, based on the sneaky observing I did from afar. I went to lots of education talks and a bunch of climate talks. Had dinner with a friend of my roommate's who is an accomplished author, then bought her book, which she autographed. Honestly, it was a bit jarring to be around so many smart, thoughtful people and then read the news about all the not so smart thoughtful people who have taken over Washington. I am motivated and have some new ideas and am excited to get started. I am also feeling rested, or I would feel rested if I hadn't gone to bed at 10 PM Pacific time and woken up at 6 AM Central Time.

In other news, Mary and I marched last weekend! 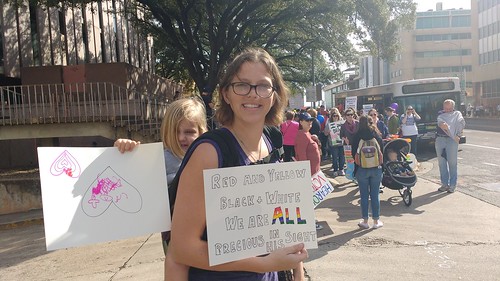 I have a Thing about crowds and parking hassles and snipers standing on rooftops, so I was feeling pretty intimidated about the whole thing, but a friend of mine had arranged a group and agreed to drive us and that made me feel better. It was SUCH an incredible experience. Tens of thousands of people gathered together to advocate for the dignity and just treatment of all people. A huge crowd and slightly chaotic, but so joyful and empowering. There were so many people it took us more than an hour to get off the Capitol grounds and onto the route, and by that time the front part of the march had already circled back to the Capitol. The mile and a half route was PACKED with people shoulder to shoulder and many more were still crammed onto the lawn. An awe-inspiring sight. Mary got really scared right after we got out of the Capitol gates, so she and I and a friend made our way over to the side and stood in a less crowded spot while we waited for the others. 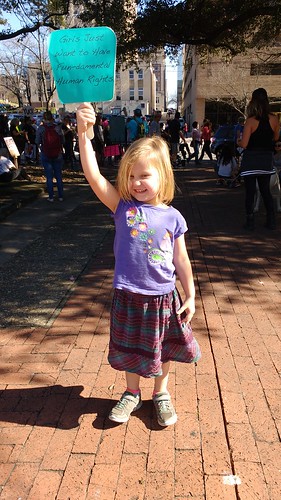 It was the most hopeful I've felt since Election Night. I mean. We live in a state where you can honestly feel like you're just some liberal hippie living in a bubble, but when you are standing among more than FIFTY THOUSAND PEOPLE--and that's just the people who could make it to the march!--it's clear that no, hate does not have a mandate. There is still good in the world. I am not some highly educated elitist snob out of touch with reality. It was a good feeling.

And now I will attempt to keep my head down and do good work and keep using my fancy liberal education to politely advocate for good.
Posted by Becca at 7:12 AM

1) I so miss the PNW! You triggered a Portland craving!
2) I had the same anxieties, and then hopefulness about the march! You and Mary look awesome!