Fall is such a fun time in our house, both because of the fun parade of holidays and the slightly-less-asshole-ish weather we sometimes enjoy (NOT THIS YEAR, says my sweaty scalp while Trick or Treating in the DARK), but also because three of the four kid birthdays happen in the fall! Mary's birthday, August 6th, is squarely in summer territory, but it is a month of summer I'd rather not participate in, so we'll call it almost-fall, that would mean that all four birthdays are in the fall.

And yesterday was Charley's TENTH BIRTHDAY. I can't really wrap my head around it either, but the signs are all there. His head that comes up to my shoulder, his affection for Hamilton music, his passion for writing, and his love for reading the thickest books he can find. He is smart and capable. He can make scrambled eggs and chili and pumpkin bars with minimal supervision (not even help!). He loves the younger kids and BEAMS when Mary wants to hold his hand in a parking lot. I could go on. He's pretty awesome. 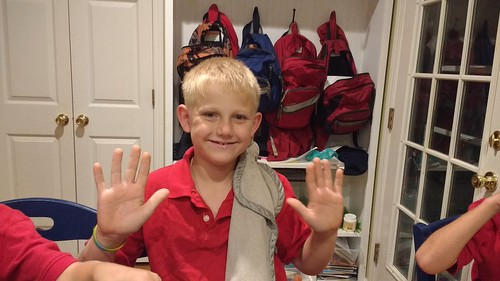 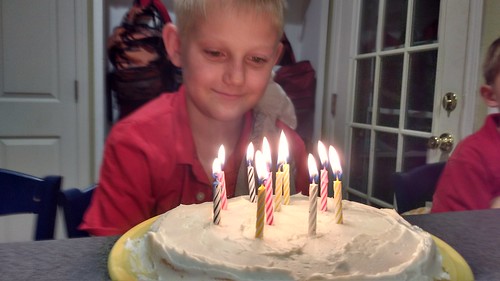 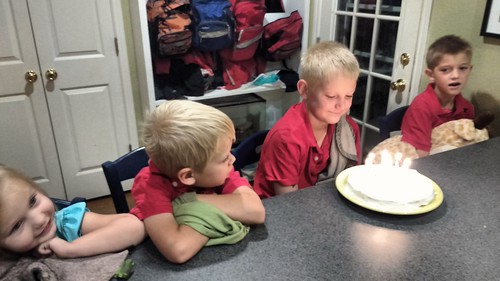 We started the day with cake and singing, then he opened his presents. A set of microscope slides of various kinds of animal and plant tissue were a hit. Several books, a long mystery novel recommended by NPR (fitting for his chosen career path of academic) and some nonfiction--Rats and The Election (those are separate titles, that may not have been clear). But the big hit was his French press and two bags of loose tea leaves.

It's like buying gifts for a younger, male version of myself, honestly. 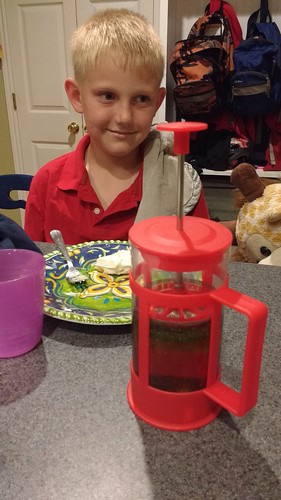 Yesterday he had three cups of mint tea and today he tried the Rooibos. While reading and wearing his "Square root of 100 years old" shirt. My goodness, I love this kid. 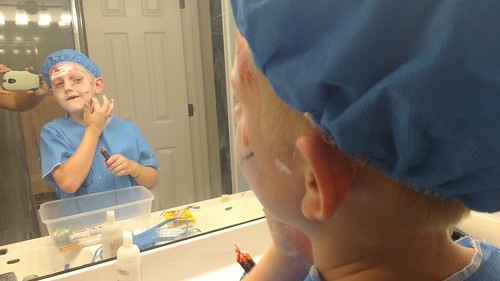 He also did his own zombie makeup and did twice the job I would have managed. I went up to check on his progress because I had a tiny Princess Anna and Harry Potter running circles around me, eager to get out and do some trick or treating, and found him meticulously applying "horror flesh" to his neck. "Will you bite me right here so there are real teeth marks?" he asked when I appeared in the doorway. I used the back of a makeup brush to make the teethmarks, which he then filled in with fake blood. After smearing some more fake blood on his forehead he was finally happy with his work and joined the rest of us outside for a picture. Then he and Wes ran up the street for their Halloween party while Ryan and I took the littles on a long slow walk to the houses on our street.

James was the most earnest Harry Potter that's ever Harry Pottered and Mary *was* Princess Anna. Wes, I'm pretty sure, could not see, but loved running up and shaking his pitch fork at people. He did a good job at staying with the group, possibly because he relied on them for crossing streets and avoiding storm drains. 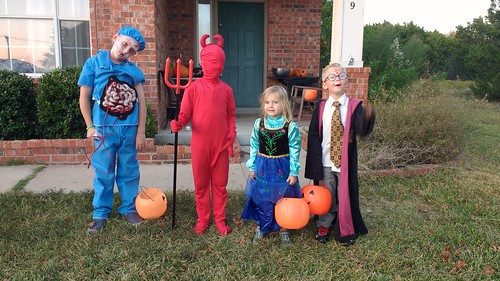 We joined the party for big kid trick or treating and mass confusion. This is the only picture I got of that. I think this is Wes and his buddy Chase. 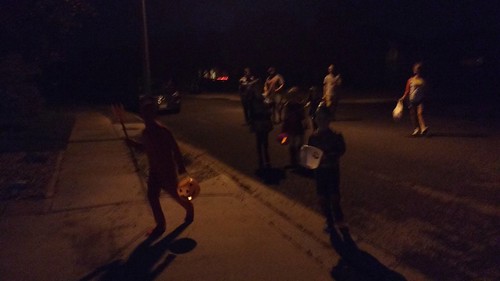 Which kid was with which family was pretty fluid throughout the evening, but serendipitously we all converged at a house around the corner around 8:30 and walked the rest of the way home together, our kids tired and our traditional travel coffee mugs full of beer depleted. I was bummed that Halloween was on a school night this year, after our giant blowout last year, but honestly, all that fun and I still got to go to bed at 9:30? Pretty perfect in my book!
Posted by Becca at 6:38 AM