I have noticed that I am either all caught up and motivated on laundry AND grading or NEITHER. It's like I either feel like drudgework or I don't. I'm sure others can relate to this. I had to find a pair of rowing socks last night before I went to bed (because I had to get up at 4:45 to row and don't like hunting for lost socks in the dark) and realized that there were AT LEAST two loads of laundry in our closet (and when I say two loads, I am talking about cramming our XL washer to the very top with darks, lights, reds, errant sneakers) and ANOTHER two loads (same deal) in the kids' linen closet and another load in the dryer and another load folded outside of everyone's doors.

Nothing makes you check your privilege like TOO MANY CLOTHES TO WASH. It's embarrassing.

Also sheets will have to happen another time, as they usually do, which is why I sleep atop an eight inch coffee stain.

But Ryan had a Scout leaders' meeting last night and I finally found the energy to tackle the massive load of kid laundry that's been waiting for me in the dryer for a week. Earlier yesterday I graded all the multiple choice questions from an exam I gave THAT DAY. WHO AM I?

I would have gotten more done except that while I was in class Charley attempted to jump from the ladder to the fifth monkey bar in some kind of display of ten year old boy-ness, lost his grip, fell flat on his back in the mulch, and knocked the wind out of himself. The nurse called me, then Ryan, and then Ryan picked him up and brought him to my office when I got out of class. He claims not to have hit his head, but thinks he fell on his stomach even though it's his back that is covered with scratches. The nurse thinks he's OK and he seems like he's OK, but that's still kind of scary so she sent him home where I was happy to keep an eye on him.

Having finished all the books he had with him, the next best option was to stand in front of my desk and fidget with things while I was trying to write a quiz. We did not stay long.

But all this to say that last night I folded a huge load of kid laundry and started another load and this morning I spent the four hours between rowing and class getting caught up on my grading. I finished 2/5 short answer questions on forty-three climate exams and put five problem sets in the outbox just in time for an onslaught of quizzes from the physics kids to be turned in. Also I just got an email that I screwed something up on the equation sheet. In the words of my friend Godmother, balls.

The other news around here, other than that thrilling account of my laundry and grading situation, is that after more than five years, I got a new pair of glasses. I did this because I couldn't really see right and it was annoying but also because Ryan got us some fancy vision insurance through work and I get a free pair. The lady offered me five or six different choices, which I rejected, then invited me to walk around and figure it out. After trying on almost every frame in both the men's and women's sections, I finally settled on this style, which seemed comfortable and less huge than all the other options I had looked at. Decision fatigue does not always lead to the best decisions. I am reserving judgement until I stop misjudging the height of curbs and steps and almost falling. 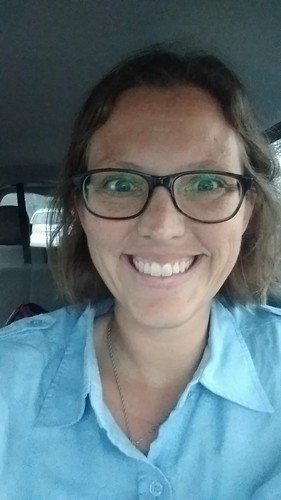 My first thought when I picked them up yesterday was, "I don't remember these being so...Unabomber."

Also, I look exactly like my dad in the early nineties.

And now I need to go slap together a lesson and activity for the garden group this afternoon. Later tonight, I will make boozy cupcakes with my friend Rosa! I am sure there will be a story there.
Posted by Becca at 12:34 PM

I live in Europe but my thoughts are with you.