And to all a good night

Well! That was an interesting week! It started Friday with another sick kid needing to come home school, a pretty worrisome weekend and early week, lots of outside time, cats, turkeys, pogo sticks, and family. And aside from the death cough that is entering week three that kept me out of rowing all last week, I'd say on balance we've done pretty well. (Of course I just returned home from seeing a movie with my friend Rosa at a movie theater that serves beer, so I'm feeling more relaxed that I was earlier today THAT IS FOR SURE).

We went to a vegan restaurant that was filled with cats (I don't know if a more Austin sentence was ever composed) because I thought patting some kitties might be relaxing and soothing for all of us (it was, especially the one who curled up between me and Charley and purred for twenty-five minutes. This may have put the first chink in the New Mammal Ban we have instituted at our home). 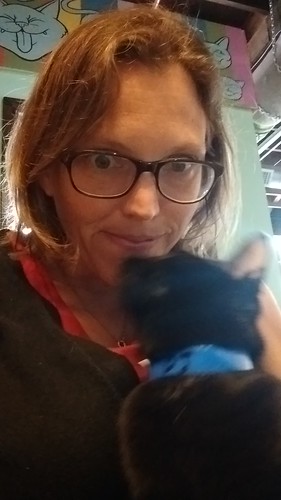 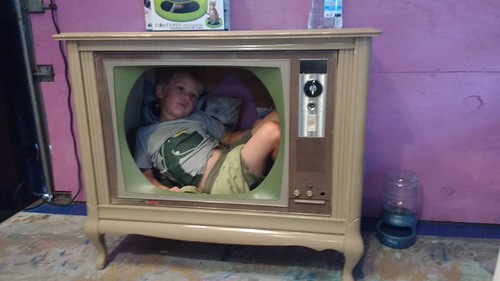 And after that we went out for Japanese food and chess, as you do (also: BREAKTHROUGH ALERT - Wes taught Charley how to play chess, gently corrected his mistakes, and WON THE MATCH and NO ONE WAS CRYING AT THE END. Fascinating). 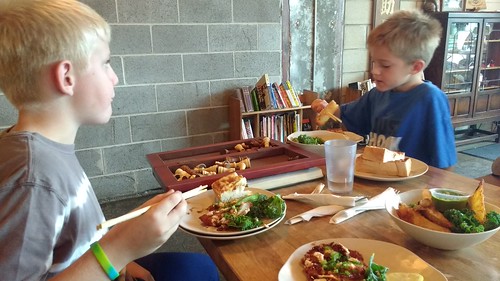 We ate dinner at a friend's house Tuesday night. For his first act, Charley got stuck in a tree in their front yard. 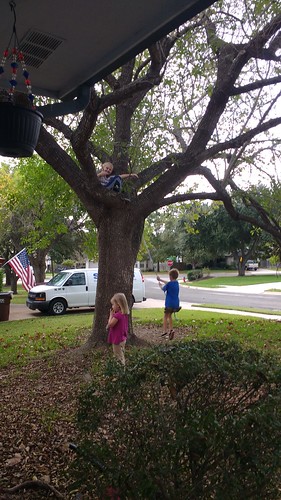 Wednesday morning we rallied early and joined cousins for a hike next to a river (that I told the kids was not going to turn into swimming, except that it did, because it does every time). 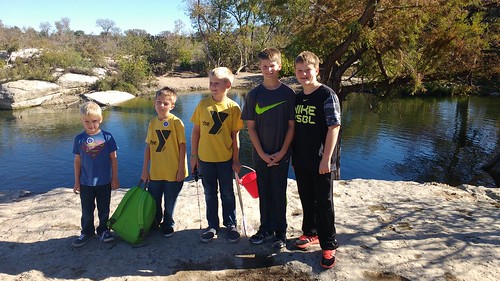 This happened approximately thirty feet from the car. 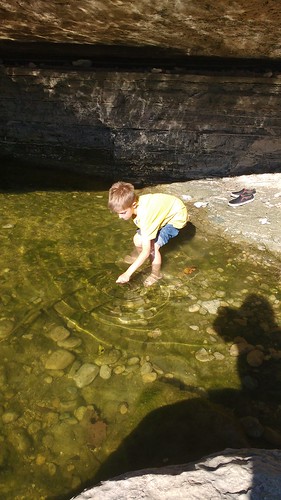 It was a beautiful day and we went for a long walk. James was a rugged outdoorsman with his orange soda and PB&J. 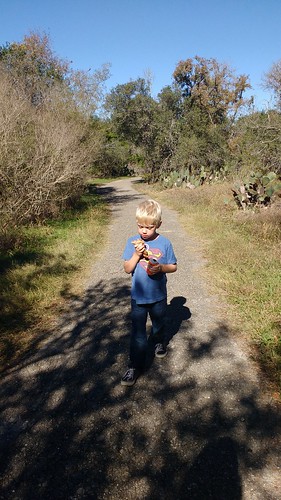 And then we drove to another part of the park where there were waterfalls. Irresistible waterfalls. Didn't take many pictures there because two kids had no pants on. 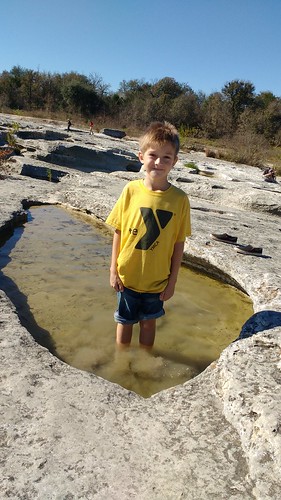 I had to leave the kids in the car when it was time to pick up Mary on the way home because no one was wearing any pants.

Thursday morning dawned snuggly for the parade and it quickly became apparent that poor James had a fever. He only managed two bites of scrambled eggs then fell asleep. Charley and Wes and I walked to Starbucks for some seasonally appropriate but not weather appropriate hot chocolate. Nice walk, nice company, terrifyingly warm weather for November, even for here. 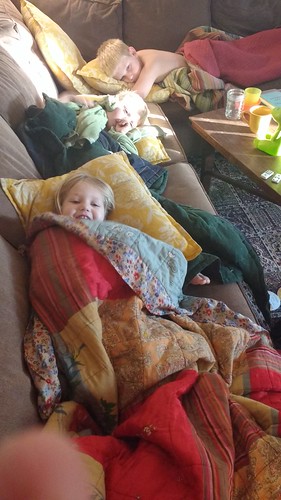 We all went to my sister's for Thanksgiving dinner and set James up in a bedroom. He quickly fell asleep, slept for three hours, had a plate of turkey and mashed potatoes, then rode my niece's bike around in the street for an hour. It was a Thanksgiving miracle! 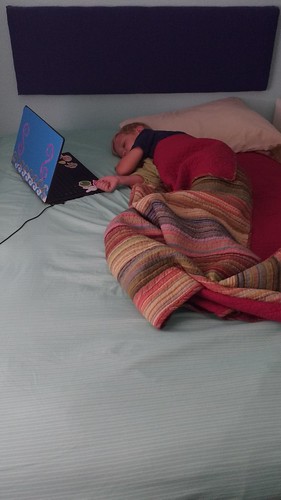 Wes made a turkey and when I complimented the turkey's green head he told me "That's not his head, that's his banjo!" 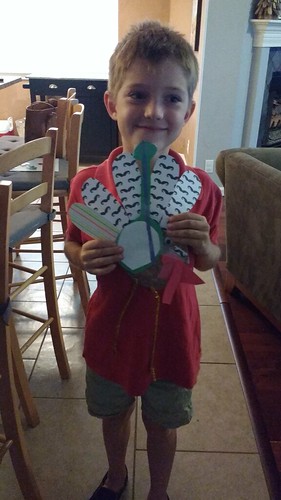 (He also surprised us after the pie course by showing up in the dining room and hula hooping for everyone. Between teaching Charley chess and hula hooping and finishing his second huge chapter book, Wes is really coming into his own this week. It has been exhilarating to watch!)

Dinner was fun and tasty and there were five kinds of pie. The company was great and so was the wine. My sister and I had a friendly pogo stick competition between dinner and dessert (I still got it. Even in a dress and flats) while the kids rode scooters and bikes. And then we loaded up two boxes of leftover pie and squeezed back into the car so we could bicker our way home, where I made it through a third of the movie I chose before falling fast asleep on the couch. 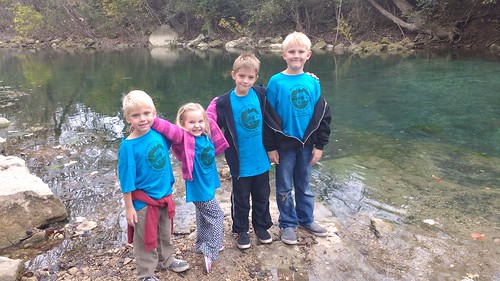 This also ended up with wet pants, but since it was only fifty-five degrees outside, no one got all the way in. 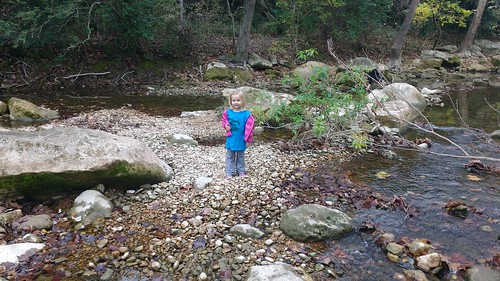 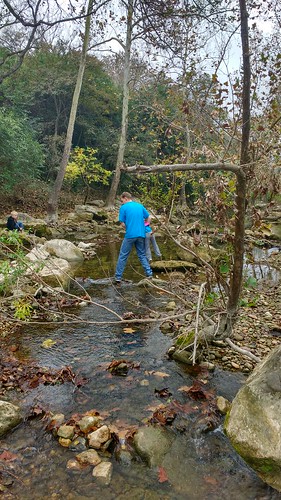 And then after that we ate tacos (Duh) and went home for movies and bikes and early bedtimes (Thanks, tilt of the earth!) for both the kids and me. It's been a nice break and I think we're ready to go back to our routine on Monday. I'm certainly not ready to go back to the Grading Situation I have waiting for me, or the eight remaining lectures in my two classes, which isn't really that big of a number when you think about it. EIGHT LECTURES LEFT UNTIL THE BREAK. I row on Monday and Friday, finals start the following week and before you know it it will be Christmas (actually, tomorrow night is the Hanging of the Greens, which is how we Protestants kick of the season of Advent, with lessons and carols and a cookie social, this is all happening TOO SOON). Anyway. Early bedtime time for me, while I still can.
Posted by Becca at 8:08 PM