Maybe now I have found my limit for weekend activities. No, that was just right.

To complete my transformation from person who longed for medical excuses to get out of gym class to person who feels disappointed when I can still use my legs properly after a work out, I signed up for a rowing race called the Pumpkinhead, which took place Saturday afternoon. I was in a boat of eight people and we have been practicing together for a month to prepare. Our captain, who I really like, is single-minded, and every time the cox gives us a choice of an easier or a harder workout, she always chooses the harder thing. Should we finish up this ass-crushing day of rowing with a two-minute sprint? I DON'T SEE WHY NOT! And so on. So I was very excited and very nervous as I drove to the race on Saturday. I parked by the boathouse, which was where we would end up after the race, but it required I fast-walk more than a mile to get to the start. In other words, the first thing I did before the race was to do what formerly constituted my entire workout.

When it was time for us to put our boat in the water, we had to pick up up on our shoulders, then walk around a small obstacle course of cones, then hold it sideways for the officials to inspect the inside. Then we had to carry it another fifty yards or so down to the water. After that we did a "warm up" of twenty-five leisurely minutes of rowing to the starting line. It was really exciting to get to the starting line with all of the other boats. And not just because it meant I could have some water. Rowing races are held in the fall and it is not supposed to be eighty-five degrees in the fall.

Here I am at the start with a photobomber in 3-seat. 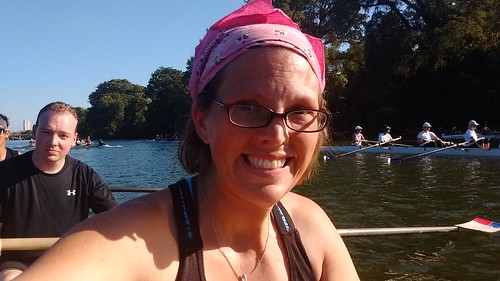 Feeling strong! Let's do this! OMG I am terrified!

As soon as the horn blew my breathing was immediately out of control and I got REALLY nervous. We were rowing REALLY REALLY FAST and I was freaking out a little. My only goal for the race was to keep up and not humiliate myself, but we were going SO FAST and we had just started the race (after nearly forty minutes of continuous exercise as a "warm up").

Fortunately, we went under a bridge and as soon as we popped out on the other side I heard all four kids SCREAMING, "GO MOM! ROW FAST! GO MOM GO! MOOOOOOOMMMMM! GOOOO MOM!!!!" Ryan had all the kids up on a pedestrian bridge to watch the race. The noise stopped for a moment as we passed under the bridge, but started up when we came out on the other side. And then I could SEE them, jumping and screaming and going crazy. 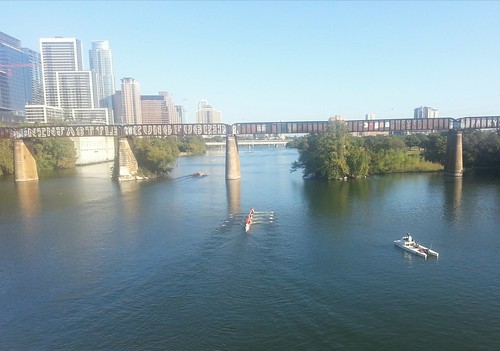 Ryan's view of us after we passed under the bridge

It. Was. The best. Smiling seemed to be the cure for panicked hyperventilating, because I was finally able to settle down after that. Even though we were still rowing so hard that I was honestly afraid I wouldn't make it to the finish line. The cox was yelling at us encouraging us to pass this other boat that was ahead of us. The Oklahoma boat, she called it. We worked so hard and finally passed it, which was thrilling even though the moment was not exactly celebratory since we still had three quarters of the race to go.

I was hanging in as we passed the halfway point and kept going to the two-thirds done mark. And then we passed under the last bridge and I knew we were almost there, but YOU GUYS. I was SO TIRED. Literally the only thing I could think about was what my oar was doing in that exact moment. My right hand was almost numb from squeezing down on the oar to feather it over and over. Finally the cox called the last two-hundred meters and yelled for us to sprint, which we all did even though there was NOTHING LEFT. Finally, the official blew the horn telling us that we had crossed the finish line and we were allowed to slow down until we got to our resting place where we could STOP ROWING OMG FINALLY. 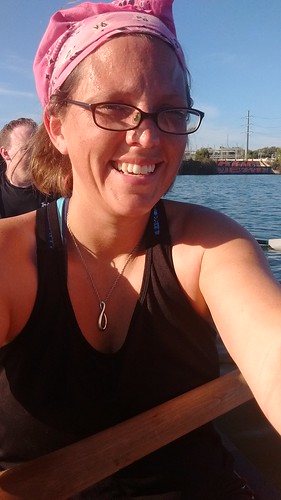 Weird expression and lack of artistic framing due to sense of ridiculousness about taking selfies while sitting in a boat.

Also I begged the whole boat for tape at this point because in addition to the callous that had formed on my left middle finger, which ripped off, two other smaller blisters also formed on the same finger and then ripped off too. I showed Charley tonight and he said "Rowing did that? Don't row tomorrow, Mom. I'll go instead." He is the best.

We didn't rest for long because we still had to take our boat back to the boathouse, which was back at the HALFWAY MARK of the course. Fortunately we went nice and slow all the way back, and I was extremely happy to be back on dry land. And even happier once we had the boat washed and put up and I could walk to my car (I had parked at a fancy hotel and had to walk right though a gorgeous and very fancy wedding reception to get to the lobby, looking just like I did in the last picture except with additional twenty-five mins of sweat-rowing. #pretty

And then I stopped at the fancy grocery store on the way home for "treats". I didn't know what I wanted when I got there, but happily it was "Cheese Week" and I quickly settled on a wheel of cheese, some fancy orange-fig spread, a baguette, and a Texas sheet cake. 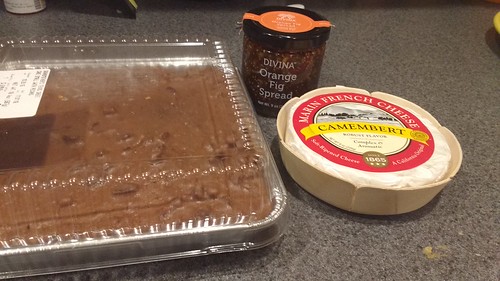 Aside: my college roommate and I used to have "crap food night" and watch movies while we ate raw cookie dough and 1 lb bags of M&Ms. This is sort of like that.

We also cracked open a celebratory $3 bottle of wine. I made it through one episode of Grace and Frankie before tapping out and falling asleep out cold sometime around nine PM.

While I was rowing, Ryan was managing some feats of strength of his own... First, he took the kids on a looooonng walk from the car to the pedestrian bridge, with a quick stop for some local culture. 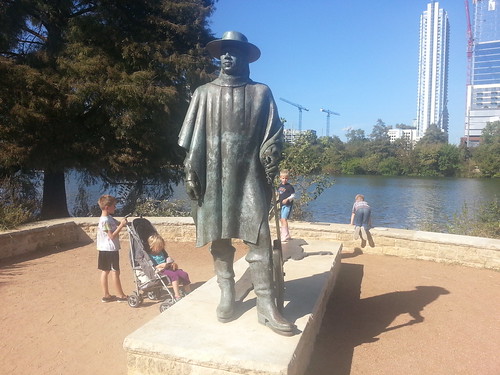 And then, he managed to get both big kids into their costumes and delivered to their piano studio's Halloween Party ON TIME. 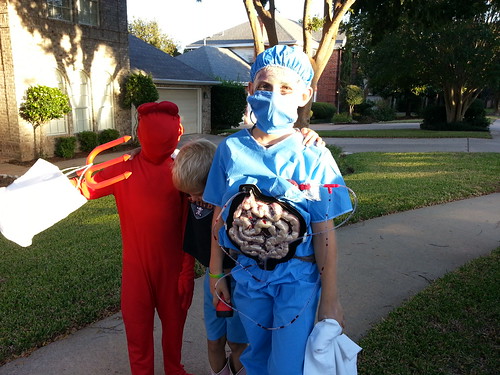 Charley told me he did his own makeup while riding there in the car. Ryan leaned the passenger seat forward and opened the mirror on the visor and told him to have at it. He did an amazing job and managed to not stab himself in the eye with any brushes, which is more than I can say for myself, standing on my own two feet in my not-moving bathroom.

Also, Wes told us he wanted to be a "devil" so I bought him his costume and everything and now he is going around telling people he is "Satan", which sounds somehow less adorable. Sigh, doesn't anyone want to be Buzz Lightyear anymore?

Friday we had twenty or so people over for chili dogs and pumpkin carving because even though it feels like July outside it's October, dammit, and we're going to pretend we're feeling festive. It was the best kind of night, filled with laughing and happy, funny, soda-and-sugar high kids, and lots and lots of pumpkins and chaos. (Not many pictures of the action, since there were like twenty kids with knives in my driveway, but we had a good time. 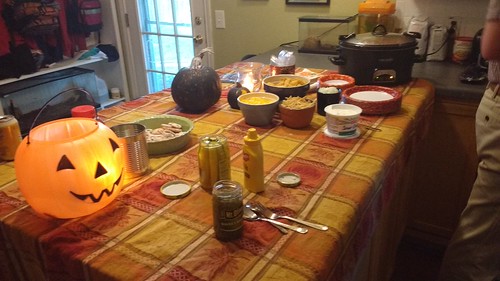 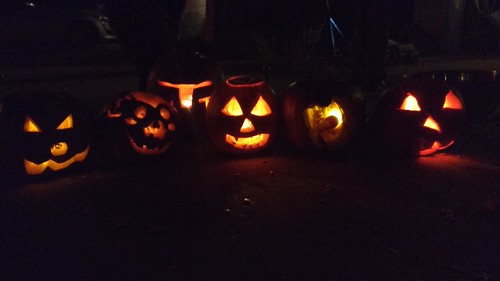 Sunday we had a church picnic for lunch and then we all came home and fell asleep in front of the TV while Ryan took Charley to a Scout meeting because, OBVIOUSLY. 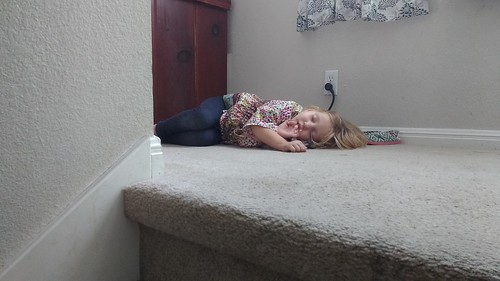 Mary had trouble admitting to herself that she needed a nap, until she couldn't deny it anymore.
Posted by Becca at 7:17 PM

Congrats! Rowing kicks my ass - you are awesome.