Didn't mean to leave you hanging re: the last two days of my momcation to the Northeast. The boys went camping and Mary and I had a very busy social calendar visiting all the people I know who have girls and like to finish sentences without having to help someone get down from something high. Also on Friday I enjoyed a morning of procrasitcleaning the hell out of the upstairs while one of my universities had a day off. As it often does, procrasticleaning resulted in several nights of doing actual work after bedtime (which fortunately was only Mary's bedtime and she is easy) and some tough choices about whether spending two hours folding laundry or two hours grading would be better. These are decisions no one should have to make.

ANYHOO. Monday morning I got up early and joined Miss N on her walk to the train for work. It's not very far and it was a sunny 45 degrees outside. We said a hasty goodbye at the subway stop when I got stuck behind the turnstyle like a total newb and she had to run to catch her train. She had left me with some instructions to get to Grand Central, so I patiently waited for the M train for a few minutes, then got on the WRONG DANG TRAIN, got off at the next stop, and waited for the REAL M train to come, which it did, so I got to preserve my dignity.

I rode the train to Manhattan, then took another subway to Grand Central all the while wearing my practiced Countenance of Disinterest that everyone there does so well. Got off the train and had one last experience of Pretty Things Are Around Every NYC Corner. 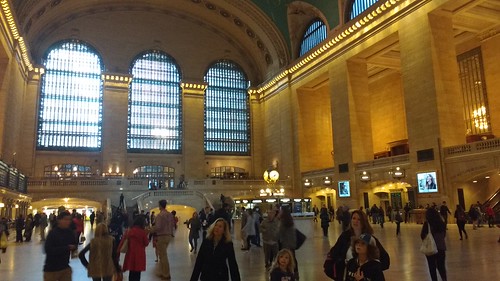 Bought my ticket to Connecticut and then bought the best chocolate croissant OF MY LIFE at a COFFEESHOP IN A TRAIN STATION (mind blown) and casually walked down the ramp to my platform and onto the train. IT WAS SO EASY.

Two hours later I was in Connecticut, where my sister and niece picked me up at the train station. We went to visit my grandma and have lunch. We had a great visit, met some of her friends, and refilled the bird feeders before saying goodbye. It was so nice. 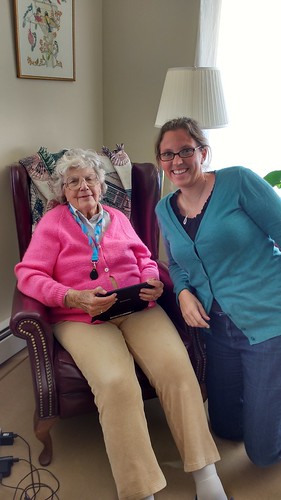 We talked about doing some more activities on the way back to my aunt's house, but settled for porch beers and coloring books until my aunt came home. Then we had a nice family dinner and crashed early. Tuesday morning we left early to take my sister to the airport. Everyone else had to go to work and my flight wasn't until 5:30, so I rented a car and spent the day tooling around Hartford.

My first stop (after Dunkin Donuts) was Mark Twain's House, which is incidentally the first thing that comes up when you search "things to do in Hartford". The museum and tour were EXCELLENT. Though it was serendipity that I ended up there, I would have planned on it earlier if I'd known how cool it was. The neighborhood was historic and interesting, the house and grounds were beautiful, and I GOT TO BE IN THE ROOM WHERE HUCKLEBERRY FINN WAS WRITTEN. 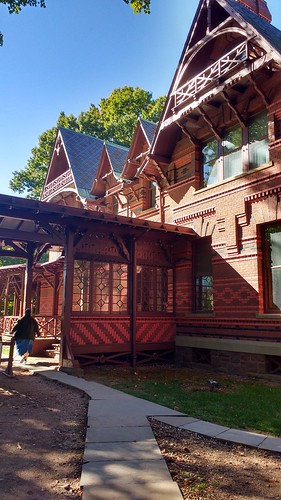 His office was on the third floor, in the billiards room where he hung out with his male dinner guests (ladies hung out downstairs in the drawing room, which had a big mirror on the wall so the little girls could practice ballet) after his four-times-a- week dinner parties. The butler's bedroom, where all the liquor was locked away, was down the hall, next to a guest room. The reason his office was on the third floor was because his original office was turned into the school room, after he found the chatter from the adjacent nursery distracting to his work. We also saw the library, where every night he made up wonderful stories for his three girls before they went to bed. It sounds like he was a devoted family man and that the time they spent in that house was happy. So interesting!

After that I spent some time working in a coffeeshop, then had lunch with my aunt, then got a pedicure, then headed back to the airport to go home. It was such a great trip!

The only hitch was that as we were pulling away from the gate at Baltimore, I realized that I had left my gray corduroy jacket behind in the gate area. I am SO BUMMED about this and have spent many stolen moments searching for a replacement on Ebay. I bought it five years ago and wore it to the AGU Meeting in San Francisco. I wore it on my whole New York Trip. I've worn it on many, many fun fall outings in between. I really loved it and am sad to have lost it (though a moment of carelessness brought about by becoming involved in a vigorous political discussion on Facebook, then realizing it was time to board the plane, then running off to the gate, leaving my phone charger and jacket behind. Hopefully it didn't cause some kind of incident.) I found one like it on Ebay, but it is brown instead of gray and, you know, just not the same. It should arrive on Thursday and we will see. In the mean time, if anyone out there has a gray, corduroy Eddie Bauer military jacket (the epaulets are highly important) like the one pictured in ALL OF MY NEW YORK PICTURES in a ladies' size large wants to make a deal, SEND ME AN EMAIL. Because my efforts to make myself have a little damn perspective have been unsuccessful so far.
Posted by Becca at 11:42 AM

so i know this is probably a long shot, but have you checked with the airport lost and found? so many things end up unclaimed there each year (although inevitably not the one thing you really really want to find)

I was just going to post that too! I've been surprised what I've been able to get back from hotels, museums, etc. (We lose stuff. All the time.)