A couple of weekends ago, three days after I returned from New York, Ryan and all the boys went on a scout campout about an hour away, leaving Mary and me alone to have a girls' weekend. Mary is quite the fidgety mess when not surrounded by her usual pack of boys, but we muddled through by visiting my friend Rosa for dinner and Tangled with her girls. Mary was QUITE EXCITED about this and complained loudly every time I had to make UTurn after getting lost in their neighborhood (and that was a lot of times thanks to my old busted GPS on my phone).

The boys returned Sunday morning at 8:35 for an 8:45 children's choir performance at our church. Ryan screeched into the breezeway, I grabbed all the kids and an armful of church appropriate clothing, ran them inside settled them on the floor at the front with the choir, knelt in my skirt as I buttoned them all into their "church shirts" and wiped smudges off faces with my sleeve. I did a pretty good job given the circumstances, but they still looked like little Dickens orphans. Especially because James wasn't wearing any shoes. Fortunately we take all comers so we got to see their adorable performance with the big choir. So earnest! Later at brunch their disheveled appearance was fitting as they loaded their plates with mountains of cheddar grits, one of every kind of pastry, and three kinds of juice.

The following week was uneventful and last weekend was delightfully underscheduled except for a county symphony orchestra concert that just happened to include Hedwig's Theme and just happened to be at our church. The kids were SO EXCITED about this even though it meant missing the 4th grade movie night at school. Everyone really enjoyed the concert and then afterward the kids got into the kind of shenanigans you get into when your parents are relaxed and happy to be left alone to talk to friends and you are on your home turf. I keep hearing stories about hiding in an air vent and scaring passersby. 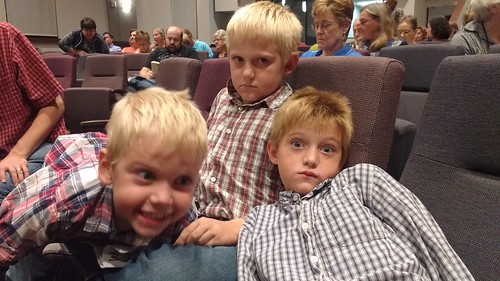 Mary went to a friend's house during the concert because she's just not ready and I didn't want Ryan have to spend the whole night in the lobby (I have to be careful about pigeonholing her in the future because now whenever she wants to blow bubbles she brings me the bubbles and says "Can you open this? I'm NOT A SPILLER"). When we picked Mary up she was watching Minions in her PJs all tucked into her sleeping bag and was LOUDLY reluctant to go home.

Saturday morning everyone slept in until EIGHT and then I used the free morning to reinstitute our Saturday chore program. The kids were weirdly excited as they clamored for the alpha jobs of vacuuming and toilet scrubbing. There was a scuffle, but eventually Mary came out with the vacuuming and Charley got toilets. Middle children were left with bathroom floor and counter drudgery and I was stuck with taking out the trash and getting all the really disgusting corners of the bathroom the kids inevitably miss. 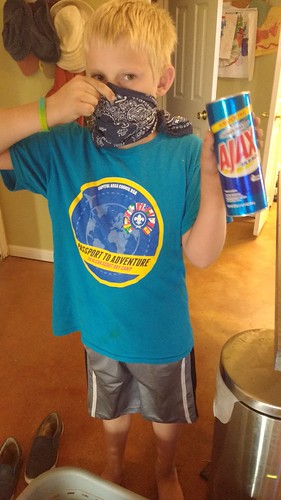 Saturday afternoon Charley and I went to Goodwill to flesh out his Halloween costume and afterward stopped for tea at a coffeeshop/brewery nearby that I've been wanting to try. He loved that tea thing so much we are buying him one for his birthday. 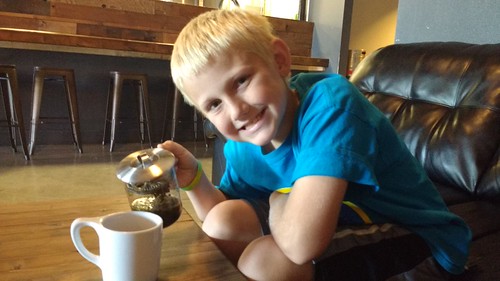 Sunday morning we went to the opening of my parents' new church building and overshot a little in the fancy department. 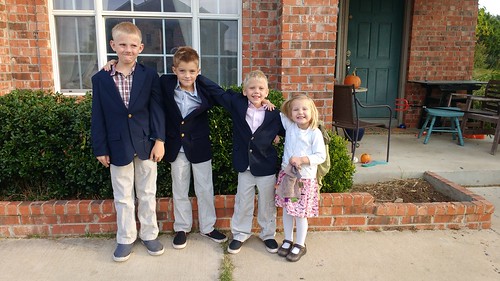 Church? Or an outing on the yacht?

I've been rowing and working a lot this week. Also? Eating. Wednesday we rowed so hard that even after eating a breakfast taco the size of my head I still required an emergency stop for a hamburger and fries on the way home. The kids have been humming along at school. Suddenly it's Friday again and we have a bunch of school people coming over for chili (seasonally if not meteorologically appropriate) and hot dogs and pumpkin carving. The kids found the hidden caches of party food I left all over the house last night after I went to the store (the 48 kid-sized cans of soda and three-dozen sugar cookies were met with particular enthusiasm). I managed to cram two double batches (so four batches?) of chili into my crockpot this morning with Mary, who woke up early. 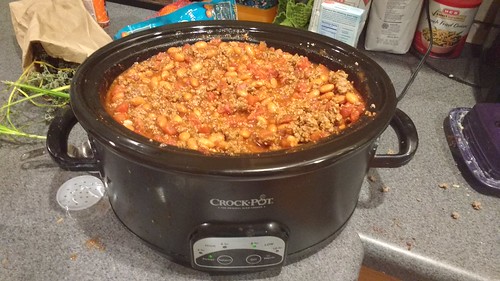 I have time to write this now because Mary is staying home sick from school with a bad cold. She could have gone, but she has the sunken pitiful eyes and woke up feeling dubiously warm last night and is acting convincingly miserable. This gives me time to get out ahead of the laundry and buy a bunch of jack-o-lanterns, sweep the floors, and get all of Charley's random critters off the front porch before people come over.
Posted by Becca at 8:05 AM