The literal struggle is literally real

I rowed on Thursday and Friday mornings last week, which was a hellish form of wonderful that left me starving and sore going into both my classes at the end of the week. On Thursday I rowed with an intermediate boat that took us on a two-hour tour of the lake complete with speed drills and a sprint between two bridges that took place at the end of the workout when I already thought I was going to die. The coxwain sang "I've Got Rhythm" by Gershwin while we all pulled for our lives.

But I loved it. And also I was glad when the next day's crew were a more laid back group (but it was still hella hard). Some of them had even, as I had, covered their hands with tape to protect the enormous blisters. I did not cover my legs with tape, but apparently that would have been a good idea because when I got into the shower I felt a sting and looked down to find a two-inch stripe of skin rubbed off on the outside of each calf. I feel like a real athlete!

(I think the problem I had with my workouts on my own, before rowing, is that I could sometimes put my work clothes on right afterward, with no shower. This is not the case with rowing, where I first take a cold shower to stop the flood of sweat coming out of my body (I have, honestly, never seen my kNEES sweat before but SWEAT THEY DO) before then cranking up the heat to wash my hair and face.

We got back to the boathouse just as the Juniors were finishing up and when I arrived in the locker room I found all showers occupied. I got out my towel and shampoo and took off as much clothing as I dared (which was my shoes and socks) and waited for a shower to open up. I got behind the curtain, peeled off my shorts and sports bra with a surprising amount of effort, and took a hasty shower then wrapped up in my towel and jumped out so the next person could get in only to find that ALL OF MY ADULT CREWMATES HAD ABANDONED ME, leaving me in a roomful of teenage girls in undies and sports bras.

I stood there wrapped in my towel, dripping onto the floor, wondering what I was supposed to do. Two of the girls were spending their getting ready time staring at their own reflections and lamenting how "hideous" they looked.

"OMG I look so gross!" said the tall slender one, with the perfect natural highlights and amazing cheekbones.

"I know, I am so sweaty and disgusting!" said the adorable petite one, with the perky ponytail of thick brown hair.

Things continued in this manner as I cast my gaze around the room trying to determine how to get into my underwear without scandalizing a roomful of fifteen year olds.

Ultimately I settled on pulling my undies on under my towel and then putting my bra on over the towel before shimmying my towel down and off. The all I had to do was put on my dress. Which, when you are still slightly damp from shower/sweat and trying to simultaneously act cool, hurry, and not let anyone see your worn out middle-aged lady underthings, is no small feat.

The first attempt went moderately well except for the fact that I put my dress on backwards. And then in the flurry of activity it took to get it off, I managed to turn the whole thing inside out.

Fortunately the two supermodels standing eighteen inches away from me seemed oblivious to my struggle, and my Hanes Her Way cotton underwear.

Once I got my freaking dress turned back the right way out, I pulled it over my head where a combination of sweat and moisture from the humid locker room air caused it to come alive and lock itself around my elbows and face like a python. My arms, spaghetti-like after two massive rows in two days, wanted to concede defeat and let us die right there in that locker room, but after a short struggle, I managed to free myself and shimmy the dress down around my hips.

I was as sweaty and out of breath as I had been before my shower but still managed to blow my hair dry and drag my body up a hill to the car. Next week I will be bringing a skirt and top. 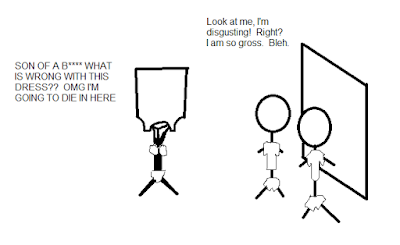 OMG, didn't you have to help me out of a dress at target once?!? This story is giving me flashbacks!

LOL. I was laughing out loud while reading this. But with you. Definitely with you.