We're gonna have to make this short, friends, because I rowed with an "intermediate" boat this morning and I think I might die if I go to bed after nine PM tonight. It was all I could do to stumble through a seventy-five minute lecture on basic statistics applied to climate data this afternoon. I mean. I mean, I find the normal distribution fascinating, but I've done this long enough to know when I've totally left my class in the dust.

We went on a little road trip to Houston this weekend to visit some friends and go to a family reunion pool party at Ryan's uncle's house. We decided to make a weekend of it so we could see some of our Houston friends and also so the kids could go crazy at the Embassy Suites breakfast buffet. 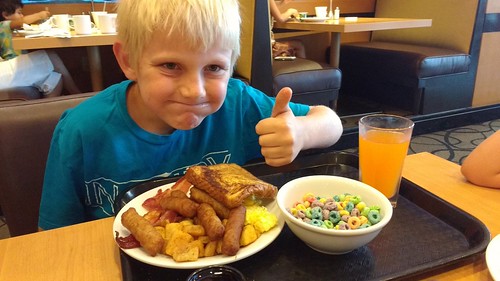 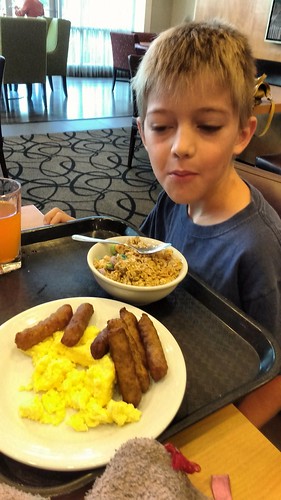 This was good because we got to the hotel at nearly eleven PM after a fun dinner with our friends Heather and Charlie, who are grad school friends, and their kids, and the kids needed to power through the day on pure sugar and adrenaline rather than sleep.

Our first stop Saturday was my friend Helen's house, which is surrounded on three sides by a wonderful garden. Helen and I met in high school, in band, in the nineties. Now she is an oceanographer who likes to sew and paint and garden. I always love our visits. She gave the kids guava juice in wine goblets then put them to work hanging out the wash and weeding the garden. 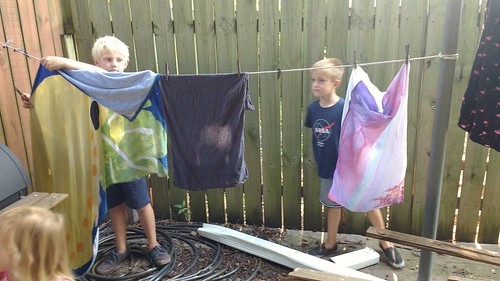 While the kids worked she showed us around and gave us samples of all her veggies. It was a DREAM GARDEN.

Then we sat on her porch and drank coffee. I wish we were neighbors. I guess we'll have to settle for neighboring cities for now. 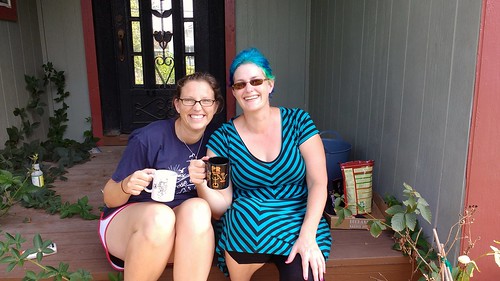 The kids had a rest on a quilt in the sun. 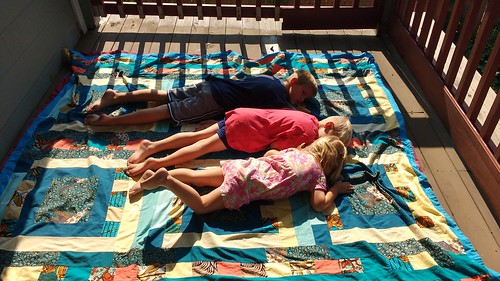 Our next stop was to have lunch with our friend Peter, who Ryan and I met in undergrad when we sang in his choir together. He shares our appreciation for good food so we met up at a good barbecue place I went to on my last visit to Houston when we launched weather balloons. The kids managed to amuse themselves while we caught up. 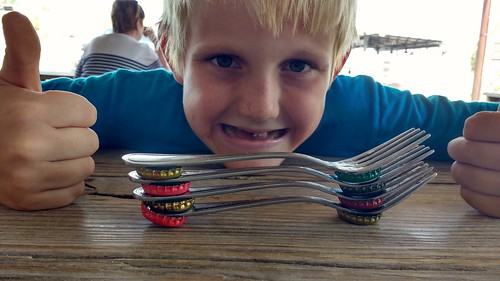 And then the late night caught up with Wes and James. 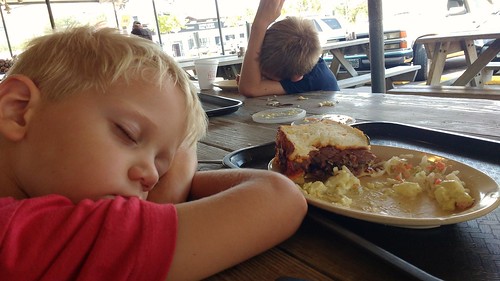 I have never once in my life left any BBQ behind on any plate ever.

The ride to the party was nice and quiet. 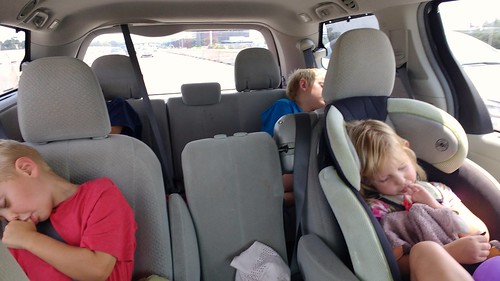 The kids disappeared shortly after we arrived and showed up later in the pool, where they stayed until it was time to leave around eight o'clock. I was enjoying talking to some of Ryan's cousins when the host came over to ask me "Where did Charley find that crawfish?" This was a surprise to me (though perhaps it should not have been) since I had just seen him in the pool not two seconds before. Sure enough I found him inside the house, walking around showing people a crawfish in a red solo cup.

(Turns out Ryan's uncle wanted to make sure Charley wasn't messing around in "the pond" because he had seen some venomous snakes there. NBD)

"Where did Charley find the crawfish?" became one of our taglines of the trip. The other one was Wes's declaration that "I don't brush my teeth in hotels."

The kids swam until it got dark while we hung out with Ryan's aunt and uncles and parents and cousins. It was so nice to see everyone and then it was hard to leave, but we had to because the kids were running on FUMES.

They took over both beds that night at the second hotel. 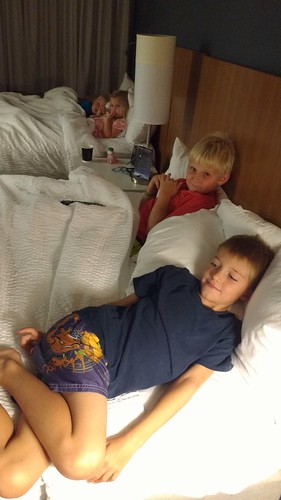 And then Mary got up at 5:30. Ryan took her to the lobby. The rest of us joined them around 8:00, where Ryan and I spent a leisurely two hours reading the paper while the kids wrecked the place. They had a Texas waffle maker. Another tagline, James: "MOOOOMMMM!!! THIS THING MADE MY PANCAkE LOOk LIkE THE COUNTRY OF *TEXAS*"

The drive home was a little fighty, but we stopped for pizza downtown and pulled into the driveway right about bedtime on Sunday. Monday was supposed to be a lazy day but I decided it would be more fun to plow through some laundry, give everyone hair cuts, and make them help me clean out the car.
Posted by Becca at 7:35 PM