Maybe she can be a pirate for Halloween

Wednesday night is now choir night for Ryan and the boys, so this Wednesday I dropped the kids off at church (they can now just run to their rooms straight from the car, which is life changing), picked up Ryan (whose choir meets later), and drove us to a restaurant for dinner. Ryan and Mary and I had a little mid-week Chinese food date and it was lovely as lovely as dinner with a tired three year old can be. And then we returned to church, picked up the boys, said goodbye to Ryan, and I drove us home. When we got home around 7:30 my biggest concern was whether I could get everyone in bed before NOVA came on at 8:00. I told everyone to go straight inside and up the stairs to brush their teeth then opened Mary's door to let her out. Of course she wanted to do everything herself, so I was feeling impatient but resolved to let her do it because I'm trying to focus on not being such a screechy shrew lately.

When she was getting out of the car, she tried to jump, and before I could stop her, fell out of the open door, still holding on to the hand hold, swung around like a crazed chimpanzee, and smashed her face on the edge of the driver's side door.

Like most instances when the kids have minor accidents, I found this momentarily annoying and worried it would derail our bedtime plans. Until she turned around to face me with her ENTIRE FACE COVERED WITH BLOOD.

I THREW everything I'd been holding (my phone, my purse, a glass of water, Mary's school bag) and scooped her into my arms, told the other kids "I need you all to come with me RIGHT NOW. It's an EMERGENCY." and ran across the street to the house of my friend, who is a nurse.

Since it was after bedtime, her husband was surprised to see Charley streak across their front lawn to their door. He opened the door curiously and looked up just in time to see me approaching with a bloodied and sniffling Mary.

We set her up on the kitchen island while the other kids watched Mickey Mouse Club (which they presumably turned on to distract James, who was running around the kitchen asking loudly if Mary was going to die). She carefully cleaned all the blood off Mary's face with some gauze pads and inspected the giant cut on her right eyebrow.

Mary was unimpressed. "I have a boo boo" she said casually "I wanna watch TV."

Did you know that I briefly considered going to nursing school instead of studying engineering? I always wonder what that would have been like. Watching my friend handle my bloody child with calm fascination as I stood uselessly aside and made stupid jokes to cover up the horror that was slowly creeping around my brain confirmed that I made the right choice. I am good at other things.

My friend told us she needed stitches and offered to come sit with the other kids so I could go to urgent care. My hands were still shaking when I called Ryan and asked him to meet us there (no choir for you! Our child has a hole in her face!). Mary chattered happily as blood slowly oozed from her face. "I have a boo boo! We go to da doctor!" When I told Ryan over the phone that I wanted to go to the place by a restaurant called "Donuts Tacos" Mary made up a song called "I like donuts I like tacos!"

She was DELIGHTED to see Ryan waiting for us at the urgent care. "PAPA IS AT THE DOCTOR TOO! HI PAPA!" she screeched at playground volume as we walked in the door. She loved everything. The pictures on the walls! Nemo on the TV! She exclaimed "I HAVE A BIIIIIIG BOO BOO!" when the nurse approached her in the waiting room. I left her with Ryan and headed home to stay with the other kids. Ryan said she was just as chirpy and excited as they walked back to the room, loved getting on the scale, climbed right up onto the table, happily let the doctor examine the boo boo, gleefully put on a gown over her tshirt and shorts, then started sobbing pitifully when they made her lie down, covered her face with a drape, and gave her a shot in the forehead.

Three stitches. I was so happy when they got home. Mary was thrilled to show me her new Anna Elsa stickers and Halloween themed rubber duck. She is quick to forgive, that one. 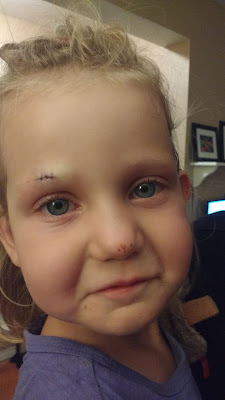 Ryan had to give her a bath yesterday morning to get all the blood out of her hair before school. Parenting is magical.

Also, they didn't put a bandaid on it at Urgent Care so I thought that's what we were supposed to do and sent her to school like that but when I picked her up it had gotten slightly puffy and the stitches were pulling on her skin like some kind of Halloween decoration so I asked our nanny to text her mom (who is a PA at the same urgent care place) and ask if we could put a bandaid on it because NO. Just no. And turns out she CAN have a bandaid. This is wonderful news. *shudder*

The next day (yesterday) was one long epic fail that I will get into another time, but I'm sure being whisked off to bed with the image of their sister covered in blood still fresh in their minds did not lead to a restful night's sleep. At least I hope that explains all the correspondance with the principal about one kid and the fact that I had to pick up another kid in the middle of the morning and take him home for a BATH (as my friend Sarah says, there's a first time for everything!). Thankfully I already had a girls' night planned at my house because DANG.
Posted by Becca at 6:30 AM

Never a quiet moment in your lives!

Give yourself many pats on your back - after such an experience I'd be wallowing in pity for my child AND self-pity for days; here you are writing a positively light-hearted account of it. Light-hearted in hindsight, of course. You and your family are an inspiration. Not least because you share with the world not just your ups but also your downs and your embarassments. Way to go.

Looking forward to those Halloween pics :-)

So sorry about Mary's boo boo...happy all turned out well. She looks so cute with her hair pulled back;-)

So sorry about Mary's boo boo...happy all turned out well. She looks so cute with her hair pulled back;-)