Well, now that the kids have been back in school for a few weeks the chickens have really come home to roost.

Which is to say that the unfortunate consequence of THEM starting school is that then *I* have to start school.

But, today I worked out and showered at the Y after I dropped the kids off and while I waited for the traffic to die down enough that I could get to University II in less time than it takes Wes to finish one of his Minecraft stories and then I got down here so fast that I had enough time to finally go get a taco for "lunch" (at 9:30 am). And WHAT BETTER DAY TO HAVE A TACO FOR "LUNCH" THAN THE DAY AFTER A TR*UMP SURROGATE WHINED THAT IF HILLARY IS ELECTED THERE WILL BE A TACO TRUCk ON EVERY CORNER! It was meant to be.

Tacos are delicious. I'm with her. 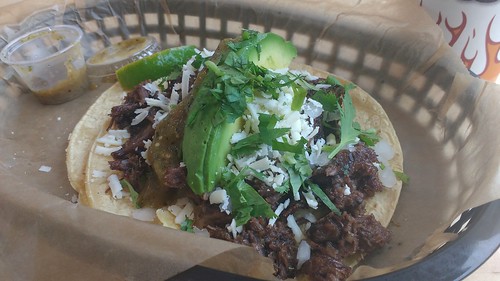 I could eat three more of these right now.

Also, the "k" key on my laptop is broken, so I have to keep a "k" on the clipboard and "ctrl-V" every time I need to use it. Unfortunately this means I have to choose whether I want to use lower case or upper case k's for an entire day. Lowercase seems to be more practical.

Anyway, after my taco I found a parking place in the faculty lot, which I used even though it is further than the building I need than the "all permits" parking on the other side of campus, because FACULTY PARkING is cool. And I'm glad I did that because I had to walk across the pretty campus to get to my building and on the way I passed some kind of festival in a courtyard that included an eight piece guitar and strings group playing traditional Mexican music. It was overcast and cool with just a little breeze and my class didn't start for two hours, so I set up my "office" on a bench under a tree and worked there. It was a FANTASTIC way to start a Friday. When the guitar band was done a jazz/blues/funk band played and that was awesome too. I may have sent gloaty texts to several friends and Ryan. Look at me! I'm outside listening to a band! At WORk! 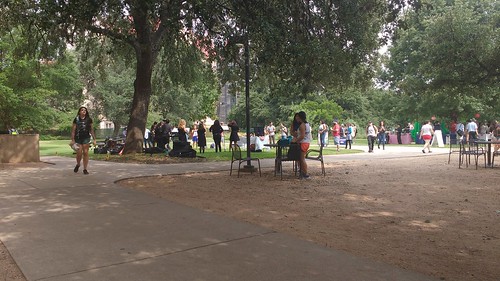 View from my "office"

And now a brief summary of how everyone else is doing:

%#@%$@FESFAT#%@ is the noise James makes after I pick him up from school every day until it is time to go to bed. kindergarten wipe out syndrome is so delightful. I want to do it ten more times.

Charley and Wes seem to be doing alright and proudly declare "no principal visits today!" when they get in the car. Way to aim high, kids! But seriously, they are doing awesome and I love love love to hear what they are learning about at school.

Mary loves school and loves her friends and loves the five minutes we have together between the boys' dropoff and hers. She also loves screaming. SO MUCH WITH THE SCREAMING. Something to work on? 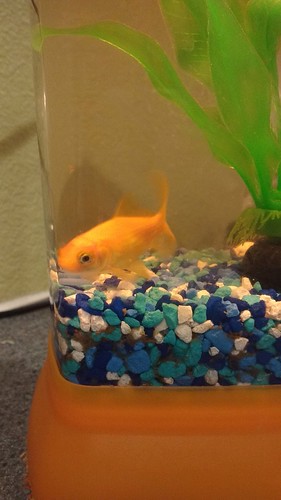 This picture of Wes's fish "Fear" popped up on my phone today. 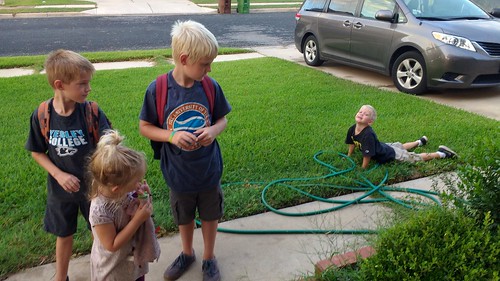 Everyone was in a cooperative mood for the college shirt day morning photoshoot on Wednesday. (%#@%$@FESFAT#%@)

And now I have to go (office hours in my indoor office are over) and get Ryan and the kids so we can go on a short road trip this weekend. Where I will try not to obsess about the four inch pile of grading I have accumulated in the last ten days.
Posted by Becca at 11:50 AM