School is going to seem awfuly sedate after all this nonsense

It seems like just yesterday that I was having a huge screamy tantrum about how I can't take the kids anywhere without one of them having a huge screamy tantrum and now already it is the last day of summer. We have really blown it out (in a good way) these last two weeks and today I had planned an epic finish, with a bike ride, some swimming in a natural swimming hole, yummy lunch, and whatever else struck our fancy, but then I came downstairs after planning it all on my phone to find Charley wrapped in a quilt on the couch with a cold that I can no longer write off as allergies. When Charley doesn't get excited about swimming holes, you know he is really miserable.

So I'm feeling a bit melancholy about the end of summer and I can't distract myself with an exhausting, ridiculous 100 degree bike ride around the lake. Bummer.

But that's OK because we had a really really ridiculous amount of fun last week, AKA Big Kid Week, since Mary started school on Tuesday. We love hanging out with Mary, but there are some things we wanted to do that you just can't do alone with three kids and a two year old, you know?

So when I picked up the big kids from their sleepover with their grandparents we headed straight downtown to Voodoo Donuts. I was looking forward to watching them go nuts when they saw all those crazy donuts and they did not disappoint. But first we had to walk twelve blocks round trip to go to the bank because the donut place only takes cash (surprise!) and I don't have an ATM card at the moment.

Best moment of that unexpected errand: when my phone mysteriously couldn't search things and I had to ask passersby for directions to the bank. Wes thought this was AMAZING. As he explained it to Ryan later "Mom's phone wouldn't work so we had to ask OTHER PEOPLE for help!" No ATM card and no phone. It was like a field trip to 1985.

On the way back James had to use the bathroom so we went into a hotel that is rumored to be haunted and added "ghost hunting" to our itinerary.

The donuts were ridiculous. 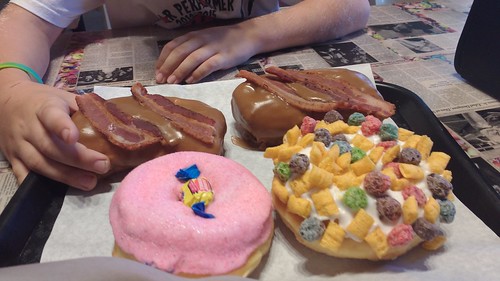 Mine was the Captain Crunch. Insane.

Next stop was to cross another item off the summer bucket list: kayaking.

James and Charley got into this boat, pushed off, and managed to paddle a good five hundred yards away from the dock in the time it too me to lower my ample frame into my kayak. I barely caught up with them before they took off again. 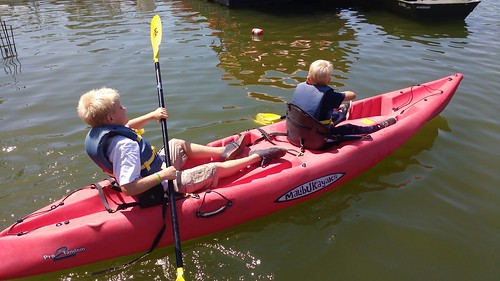 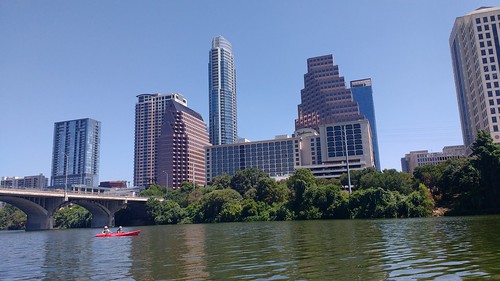 Wes wanted to paddle alone, so I had lots of time to myself. 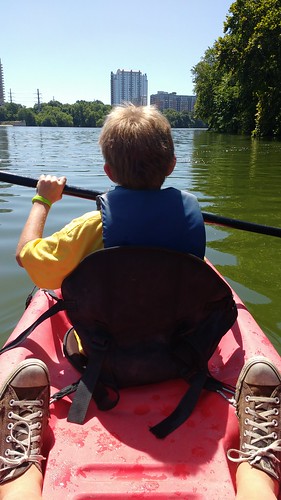 I love this city so much I can't stand it. 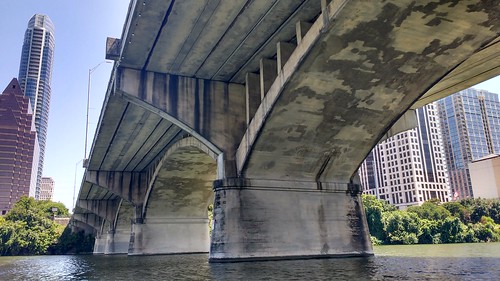 Wednesday we went to our garden class/cupcake time/swimming time that has become our standing Wednesday plans and now that I am typing this I am really really sad we are not going to be doing it this week. This time we had a couple of extra friends join us and we spent three hours swimming (also: we finally, on our fourth visit, thought to buy fountain drinks at a nearby hamburger place, and send one adult off with all the cups to get refills every so often. This also gives you access to the good bathrooms.). The kids had a blast, as always, and because it was our last time I looked the other way when Charley and another boy began wandering down the river bed past our usual boundaries. And that is how I ended my summer standing under a highway overpass, yelling at kids in my bathing suit. 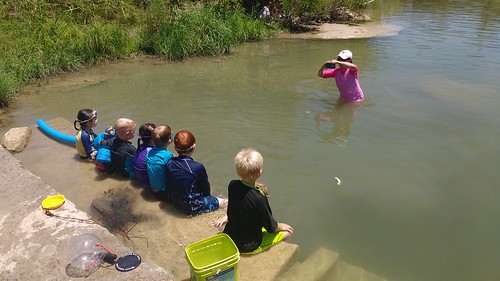 When we were just about to leave, another family of friends came and we spent another HOUR swimming. It was a LOT OF SWIMMING. We picked up Mary on the way home and then got dinner at a sub place because DANG, that was a lot of time outside in the hundred degrees.

Thursday we met up with some friends to go rock climbing at a place downtown (near the bullet Sonic!). This was another home run--a giant industrial building packed with climbing walls of all types. We all got shoes and climbed for hours. It was INSIDE, which was a welcome change from the rest of our week.

Here's how you know you're not in the suburbs anymore: free range poultry. His name was Reginald. 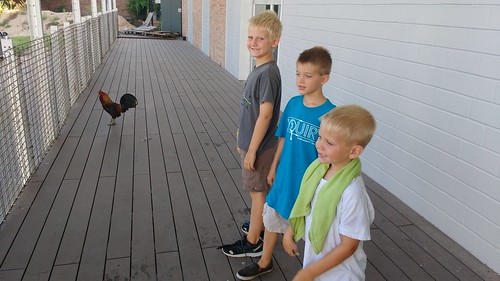 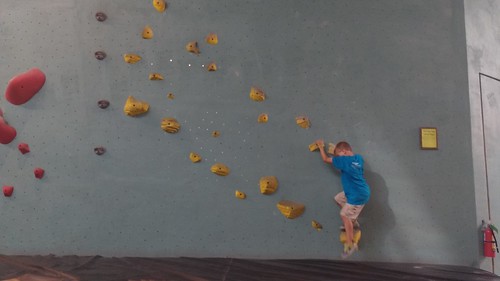 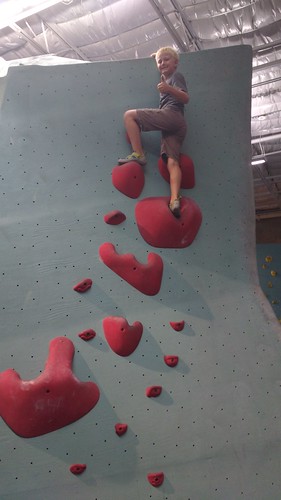 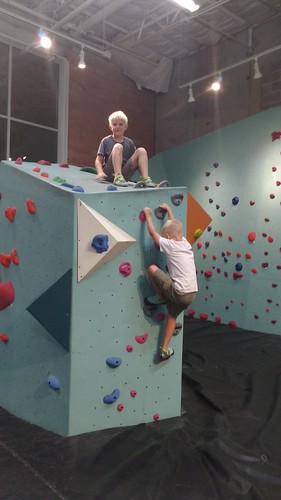 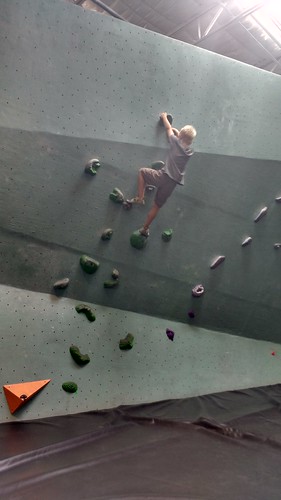 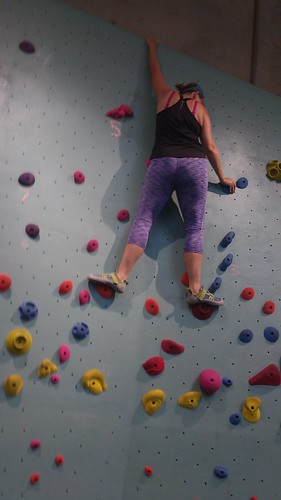 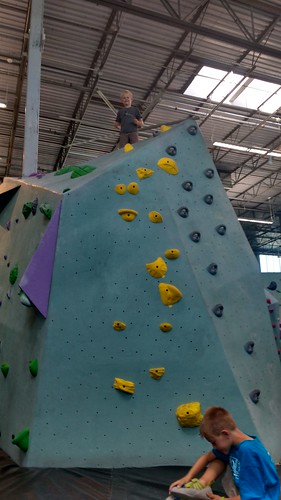 Ten out of ten. We are going back as soon as possible.

Also, I thought I was going to have to carry all three of them into the school for Charley's Meet the Teacher night.

(It occurred to me many times that week how happy and content the kids are when they are allowed to exert themselves this way all day every day. It's not a wonder we start having issues when they have to go to school, which even though their school does their best to keep them moving and engaged, it is not the same as hauling yourself up a fifteen foot wall over and over again for four hours)

Friday my friend called and told me she wanted to have fun but didn't want to put on a swimsuit or spend any money, so we went to the hippy grocery store and hung out on the deck and playground until after lunch (I only had James and Wes, which was weird, because Charley and Ryan were at Six Flags (Charley earned a free ticket reading last year) and Mary was at school. Two kids on the playground is kind of amazing) and then we went to a pool party for Back to School and Saturday was MARY'S BIRTHDAY! 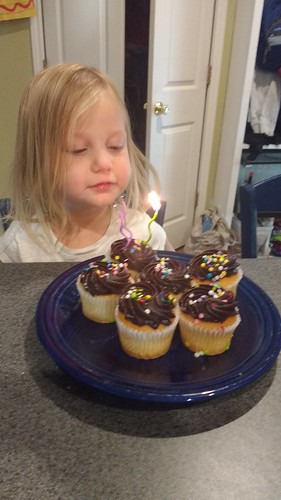 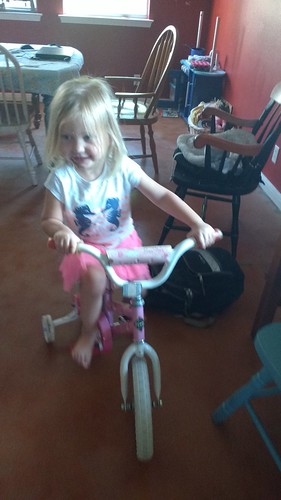 Later, we slapped together a last minute dinner/birthday party with (by request) "little hot dogs, little hamburgers, and fruit." 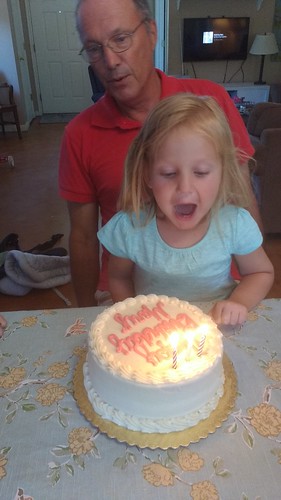 Poor Mary and James--even if they weren't third and fourth their birthdays are at Back to School time and Christmas and they are destined to have last minute parties.

And now we are less than twenty-four hours from the start of school, it's finally here! Everyone is very excited and all I can think about is allllll those lunches to make. Although after last night, when I was forced to combine making stirfry for dinner with breaking up a massive fight for Netflix dominance, and negotiating the submission of a conference abstract with two coauthors, it will be nice to have some quiet work time).
Posted by Becca at 7:44 AM