So I'm taking a rowing class. It meets at six o'clock in the morning Mondays and Wednesdays and even though I have to leave the house when it is dark and everyone else is asleep I am completely in love.

Yesterday I did a makeup class for the one I missed on the first day of school and due to a miscommunication I ended up in a more advanced class than mine, which meant that instead of rowing on the ergs or in the barge (which is essentially a paddleboat with oars), I went out in an "eight", which is one of those long skinny boats for eight rowers that you may have seen on the Olympics.

The first thing you do is haul boat out of the boathouse, carry it to the dock, and then put it in the water. This is complicated by the fact that there are oarlocks and outriggers and all manner of things sticking out of the sides of the boat and the fact that the boat weighs two hundred and forty pounds and is approximately a hundred feet long. They also like to remind you that it cost fifty-thousand dollars and is extremely fragile.

There were several moments during this operation that I was worried that I was going to be the one to drop the boat. This did not happen. I learned later that part of the problem was that I (5'10") was standing next to a woman who was a good six inches shorter than me, meaning I was holding almost all of mine and her weight combined. When we put the boat away I found two dudes about my height and it was much, MUCH better.

When we got the boat all into the water I noticed that the horizon was filled with dark, heavy storm clouds. By the time we got the oars in and then all the people in (all of this is done in unison, directed by commands from the coach, who yells at you with a bullhorn the entire time, which is reassuring, in an unexpected way), the sky directly above us was filled with purple mammatus clouds and we could see rain in the distance.

What I did not know at the time is that we were about to be under that orange and yellow area near the "A" in Austin seen on the radar image below. Not ideal boating weather, you guys. 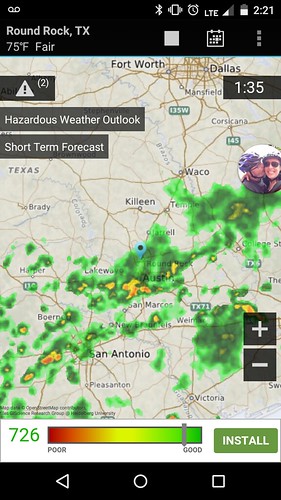 Through the bullhorn our coach assured us that as long as there was no lightning that we were perfectly safe.

I wasn't prepared for the amount of wobble the boat was doing as we made our way across the lake to get started. Probably also the forty mile per hour wind that kicked up as we left the dock was making it worse. But when everything settled down and the stern pair (I was in the bow seat, where they put the newbs, from what I understand) started to row, we started sliding through the water SO FAST.

We kept rowing faster and faster through what turned out to be a torrential downpour. Cheering together when it rained harder. Sliding under bridges. Putting my glasses back on fourteen times a minute. Taking turns rowing and setting (stabilizing) the boat for the other rowers. Totally ignoring the water sliding down my back and pooling in my seat and the area around my feet.

Under the bridges water fell on us from forty feet above in huge showers of highway runoff like one of those tipping bucket features at a kiddie pool. The rain fell harder until we couldn't hear the coach yelling at us. Whoever managed to hear what he'd said yelled it out for everyone else. After about thirty minutes we turned around and rowed back to the rowing center, where it started to THUNDER. The director of the rowing center was waiting for us when we got there, apparently concerned about the boat full of beginners that was cruising around in a thunderstorm. When we picked up the boat to take it back inside and held it upside down over our heads we were treated to one last shower of dirty bilge water. I was glad I had waited to put my shoes back on.

It sounds really hard and uncomfortable, but you guys I am HOOKED. My favorite part is the way all you have to do is listen to the coach and do *just your oar*. Do you know how often I get to focus on *just one thing*? Never. Never is the answer. All I had to do was just focus on what my oar was doing and making sure I was in time with the person in front of me. And even with my boat full of beginners and the way my side of the boat would occasionally dip down and make it so my oar would get stuck under the water, it was FAST and FUN. I loved it. Every second. Except when I lost my concentration for a second and smashed my fingers between my oar and the gunnel. That's one thing I learned: never stop concentrating.

I was really wet when we got back. 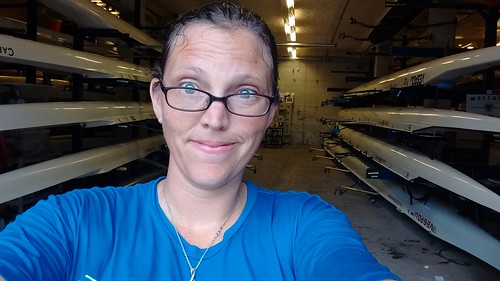 Like really, super, wring out your underpants and socks kind of wet. I had to blast the heat in the car on the way home. And although I felt awesome when I got in the car, by the time I got home I was stiff and tired as can be. I dragged myself inside, made dinner with Ryan, ate, got the kids to bed, and conked out at 9:30. Which is good because I had to leave my house at 5:10 to go BACK to the rowing center for my regular class.

It was raining again but since it was raining AND dark, we stayed in and worked on the ergs. I erged for two hours. That was also fun. I think what I've been missing from my workout routine is someone yelling at me and telling me what to do. Is this why people like to play sports? Next class is on Wednesday and the forecast calls for more rain, but we've been promised a trip out on an "eight" again unless there is lightning and I cannot WAIT. <