Come on ride the train

One thing my little suburbanite kids think is fascinating is public transportation. Of course, our trip to New York City last summer with its hours spent on the subway has dampened their enthusiasm somewhat, but Going On the Train is still a reliable way to kill two air conditioned hours for relatively little money.

Our plan was to get on by our house, ride a few stops to meet some friends, then ride the rest of the way into downtown, where we would eat hot dogs for lunch at our favorite hot dog place, fart around for a few minutes, then get back on the train home.

The friend we were meeting had an errand to run about a mile and a half from the train station, so we decided to throw in a few bus rides too, just to spice things up and/or add some variety to our Pokemon rosters.

Between the two of us there were seven children. SEVEN CHILDREN. 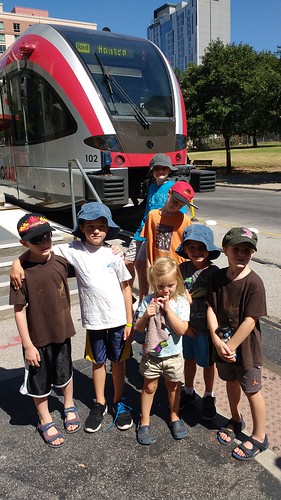 Lunch was predictably loud and fun and though they put us in our own little side room so as not to bother the business lunchers, that didn't stop us from sitting RIGHT NEXT TO a pair of men who were having a very official sounding conversation as the kids jostled for ketchup bottles and repeatedly slammed the vintage porch glider into the hipster metal coffee table. BANG BANG BANG. 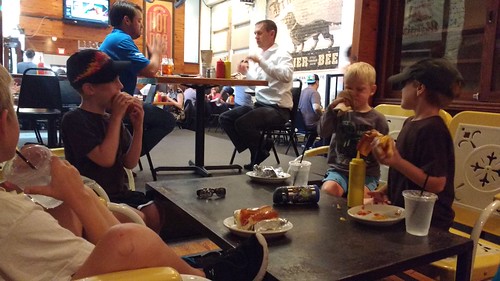 You should have heard the commotion when all six boys went to the men's room.

After lunch we walked a block to the bus stop where I became so flustered with the ticket reader that the driver just sighed, pushed a series of buttons, and let me on. The kids were already on the bus getting yelled at by a wild eyed old man with a huge beard, torn jeans, and a white tank top. In this town that means he was either homeless or a tech-billionaire. Either way he was screaming at the kids to get to the back of the bus and hold onto the handles FTLOG. I just smiled at the kids like "Wow guys you almost NEVER get yelled at by a stranger when we're in our van!"

But they did hang on tight to the handles. 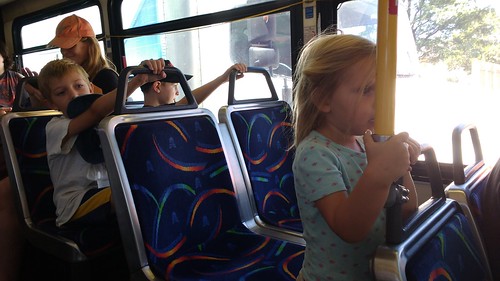 We had some time to kill while we figured out the second half of our route, so the kids read the student newspaper and milled around talking about how hot it was. 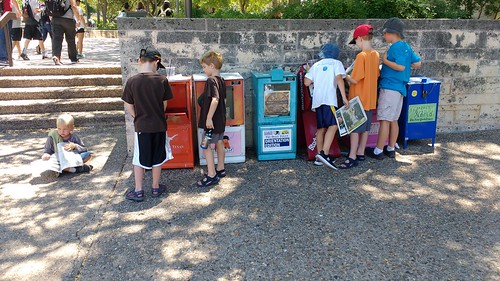 Ultimately, after a phone call to the bus people and several minutes comparing routes on the bus app, we gave up on figuring out where to get the next bus and decided to walk the mile to the school where my friend had to turn in her work. 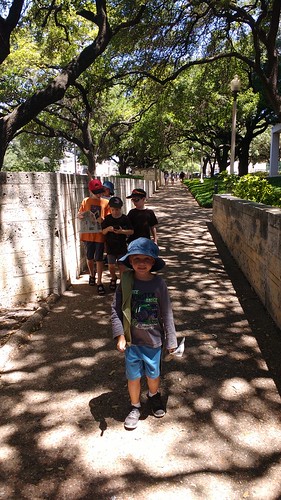 We had to stop halfway there for second lunch. 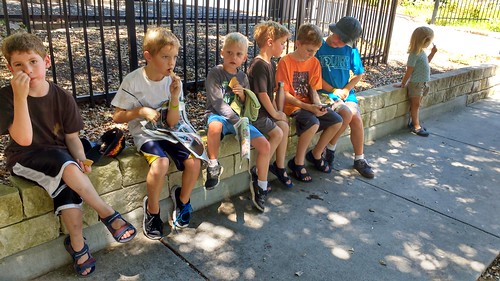 But it was a pretty walk through an old neighborhood. When I mused aloud "Wow, look at all these pretty houses. What do you think it would be like to live here?" James responded "I'm so hot I might die."

When we finally arrived at the community college we terrorized the student lounge for half an hour (free air conditioning and water bottle refills!) then went back outside to figure out how we were going to get back to the train station. Twenty more minutes waiting (fighting) in the sun and we were back on the bus heading for our train. 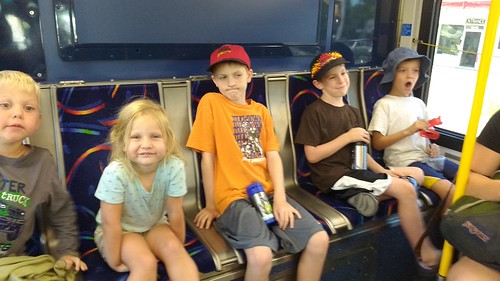 Unfortunately, due to construction, the bus didn't stop at the train station and instead continued about two tenths of a mile past it and dropped us off at an intersection I've heard mentioned on the evening news. My friend looked at me, "I think we overshot the gentrification" she said. Indeed.

Pro: There was a Sonic there. It was daytime.
Con: There was a hypodermic needle on the sidewalk and a BULLET IN THE SONIC PICNIC AREA.

I know I live in Texas, but I am not accustomed to encountering AMMO while ordering a cherry limeade. My liberal guilt was at odds with my desire to GTF out of there as quickly as possible.

I was happy to get back on the train, not least because it was air conditioned and I knew that on the other side was my VAN where I could strap all the children down and not have to worry about anyone wandering off for the whole ten minute drive home.

While I was distracted folding up the stroller the kids all sat down next to this woman who apparently hates children, judging by the way she shot me dirty looks every time one of the kids so much as spoke or shifted their position. I wasn't feeling particularly sympathetic to her attitude because the kids weren't doing anything wrong (which was honestly kind of a surprise). I ignored her attempts to shame me into...I don't know... moving four kids to another part of the crowded, moving train to suit her preference that she gets four seats all to herself...and chatted softly with the kids about all the fun things we had done that day. 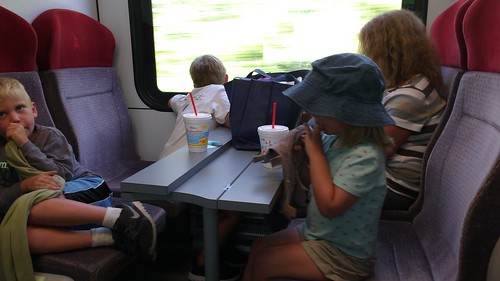 Fortunately she had gotten off before Mary crawled under the table and peed on the floor.

The kids are already asking to go on the train again.
Posted by Becca at 1:44 PM