Weekend of James. And Sunrise Sunset

Our Father's Day Sunday plans were thwarted by the sound of a kid puking on the stairs at four o'clock in the morning.  We had planned on canoeing at the lake and having a picnic before maybe getting some ice cream and coming home to eat brisket from the slow-cooker  Instead we skipped church and hung around at home until it was clear everyone was getting really restless and it would be a good idea to get some kids out of the house.

So that's how Ryan spent Father's Day 2016 taking three kids on a bike ride on the neighborhood trail, having a picnic, feeding ducks, and catching crawfish while I watched Wes convalesce on the couch, read three People magazines, ate half a sheet of Rice Crispy treats, and fell asleep on the couch.  Festive!

They were gone for five hours and came home sweaty and happy.  Charley showed James some fish scales in his microscope, we ate dinner, took showers, and had everyone in bed right around seven o'clock.  James was asleep in SECONDS, which is good because House of Cards wasn't going to watch itself. 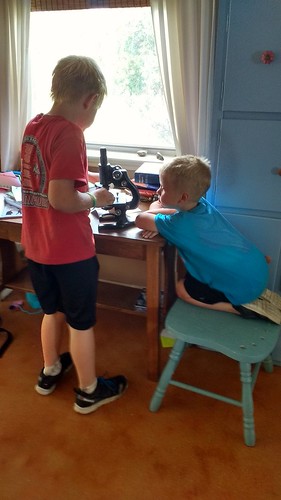 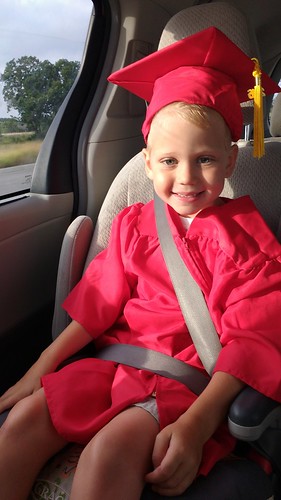 James graduated from preschool!!! (technically he still has a week left). It was a sweet little ceremony on the playground. He popped out of his chair when they called his name and walked proudly to the podium as the director read "This is James and he would like to be a WIZARD when he grows up!" 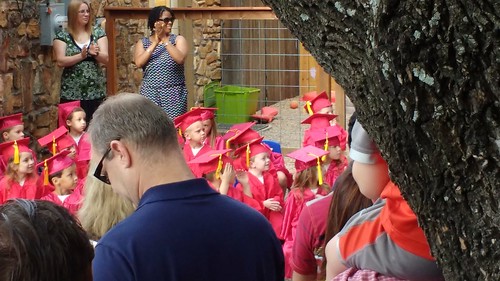 It was hard to switch to a new school two years ago, because we really loved our cozy little church preschool, but this has absolutely been the best thing for our whole family. James loves it and has learned so much independence. His favorite thing to work on (calling things "toys" or "playing" is a Montessori no-no, this took some relearning on my part) was geography and he loves maps, which he comes by honestly. He has nice friends and two of them are headed to the same school with him in the fall for kindergarten. And it's not goodbye because Mary is going to be in the same class next year that James just left!

After the ceremony they had a carnival aka a two hour period in which we had only a general idea regarding the location of any of the children. I lost track of James for a little while there but looked up to see him ride by on a horse, not wearing any shoes. Hashtag montessori.

They also had snowcones. Unlimited snowcones. Charley ran up to me and proudly announced "If I eat one more snowcone, I'll break the record for most number of snowcones!!" 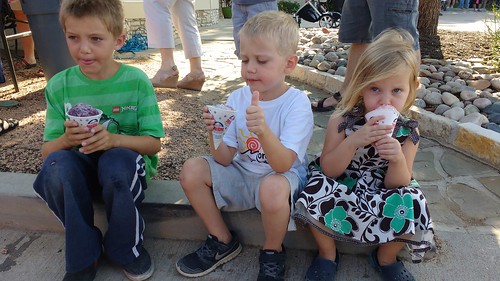 Afterward we joined a couple of other families at a hamburger restaurant with a playground for the afterparty, which ended abruptly when we heard honking and looked up to see the three graduates peeing at the edge of the playground. #notthatkindofplace

Saturday night we took everyone to the pool for some summertime magical funtime and a dinner picnic. The big kids took their swim test for the year and passed with flying colors. When they ran off to go on the slides all by themselves James decided he'd had enough with floaties and hanging out with the parents and decided it was about time he learn to swim. We spent a few minutes passing him back and forth and encouraging him to KICK KICK KICK KICK! before I decided to just see what happened if I didn't grab him *right away* after he pushed off the wall and GUESS WHAT? He SWAM!! 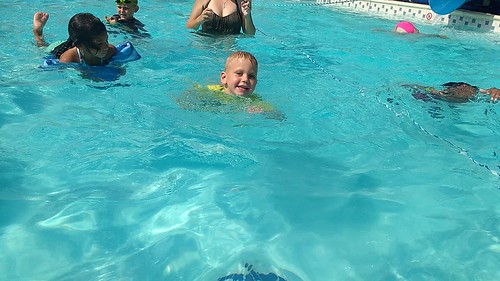 It was such an exciting moment. Just ask anyone at the Y pool Saturday night who heard me screaming "YOU'RE SWIMMING! JAMES YOU ARE SWIMMING!!!!!" I mean. We were at a pool, so DUH.

He spent the rest of our two-hour visit practicing every conceivable situation, learned to jump off the side and start swimming, and is completely ready to take the swim test and join his brothers on the slide. It will happen by the end of this week.

So I guess now that he can swim and has graduated from preschool and learned the word "balls" from his older brothers, he's really not a baby anymore. Sigh.

He wanted to teach Mary to swim after that, but I put my foot down. I WILL NOT HAVE ALL OF YOU JUST GROWING UP WILLY-NILLY. Mary still wears a floatie and calls ice packs "super duper colds" (as in, "I hurt myself, can I have a Super Duper Cold?") and sleeps with her bottom up in the air. Even though she is turning the age we do not speak of in August, we can still call her a toddler until then.
Posted by Becca at 9:13 AM

Yay James!!! After our super-fun weekend I thought to myself "This was SO fun without babies!" Pros and cons to the age-we-do-not-speak