The fun thing about turning thirty-six is that you realize (at least I did) that it's OK to stop waiting around for everyone to guess what you want to do and just do it. Which is why we had a lovely enchilada dinner from a great Mexican restaurant that I got to eat IN MY OWN DANG HOUSE where I could relax and the kids could run around after dinner (Why didn't I think of this sooner?). Ryan's parents were in town and it was a great celebration.

The day started with our traditional cupcakes and presents. Ryan hit it OUT OF THE PARK. Somehow he found the songbook from church camp that I have been coveting for the last SIX YEARS. That is not only out of print, but doesn't have an actual title (Unless "Songs" is a title?), or an ISBN number, and was published before I was born. But HE FOUND IT. I have never loved anything more. And now I have to learn to play the guitar. 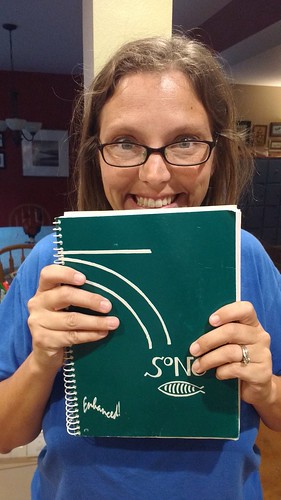 My other present was a gorgeous metal rooster, which brings the bird-total in my kitchen to six. Ryan said he noticed me admiring the rooster at one of my favorite restaurants and thought I'd enjoy having my own. Boy was he right! It sits next to my coffeemaker and reminds me every day of Ryan, and his loving indulgence of my unusual tastes. 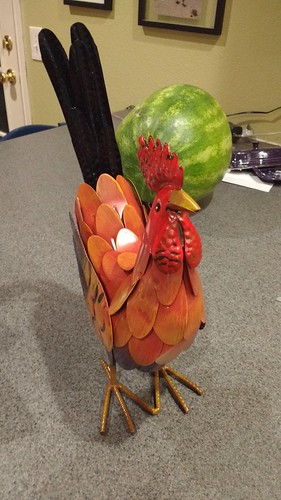 Wednesday afternoon when I got home from work I was setting up the wading pool in the side yard (which involved a hand pump and more cardiovascular exercise than I am accustomed to) and a neighbor and another friend appeared on my front porch with pizza, cupcakes, and a box of wine. We sat in lawn chairs while twelve kids descended on our tiny baby pool. Glorious. 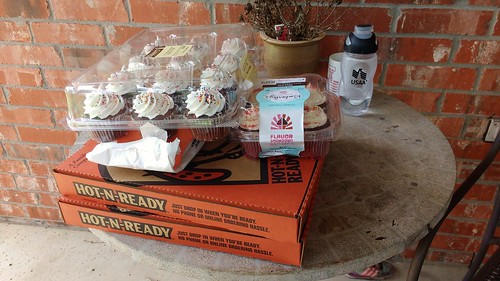 On Saturday morning I went to Learn to Row day downtown at a rowing club. I have been wanting to try rowing for SO LONG. I was so excited to hear about the FREE opportunity to check it out. Unfortunately, we have received more than ten inches of rain this week and the lake, which is normally totally placid, was wide, muddy, brown, and flowing rapidly. Every once in a while a huge log would float past us. It was closed to boating so we had to be creative at Learn to Row day, but it ended up being really fun. We started out on the ergs inside the boat house. Five minutes of erging and today my legs and butt are UNHAPPY. It felt great. 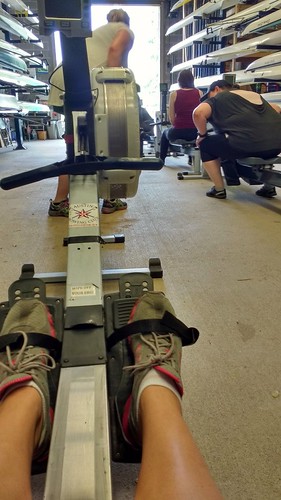 View of the lake not pictured, but it was nice.

Our coach was a giant man with a stern voice who punctuated every statement with several loud claps. I did not want to make him mad. It was all very athletic and stuff. After our indoor practice (workout? I don't know, I'm not really an athlete) we went out to the water and got into the "practice barge" which is a wide flat boat with eight seats and eight oars. It was tied between two docks, so technically we weren't out in the lake, which was closed. It was really funny when we all started pulling our oars at once and lifted the front of the boat up onto the dock in front of us (which is actually behind us because rowing is a confusing sport where you sit backwards). All I know is that I want to GET OUT ON THAT WATER. I almost signed up for the four-week class on the spot. I loved it. 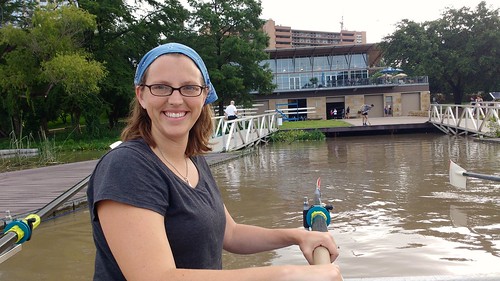 After all that exercise I met my friend Cindy at an outdoor cafe for mimosas and a fried egg sandwich with chipotle sauce, avocados, and bacon. We rarely see each other in person and it was such a treat to be out, together and kid-free, on a Saturday morning. Happy birthday to me! Also I cannot stop thinking about that sandwich.

This afternoon we had lots of friends over for the massive playdate I planned with my friend Rosa for my birthday. I don't know how may people were there but we ate thirty-nine hot dogs, multiple six packs of beer, two watermelons, twenty juice boxes, and a twelve-pack of sprite. And half of a huge chocolate sheet cake. There were two wading pools and a slip and slide and also more mud than you can imagine, due to the ten inches of rain and the fact that I had to empty out one of the pools and refill it because someone from my family peed in it on purpose (and then got yelled at and banished to the inside until I had calmed down enough to not lose my shit in front of my friends. Again.).

It was total, wonderful chaos, and exactly what I'd hoped it would be.

I set up the driveway with sidewalk chalk and kids drew huge pictures and hop scotch. After everyone was in bed we were cleaning up from the absolute CARNAGE that was left behind after the party (watermelon rinds and mud. everywhere.) Ryan came in to ask "Do you want to see the stick figure with the penis before I wash it off the driveway?"

The kids fell asleep in MINUTES after all that activity (Mary conked out mid-sentence). And now I am eating a final piece of cake before bed and looking forward to work and my last physical therapy appointment in the morning. Charley and Wes will be on campus with me one more day before starting Cub Scout camp on Tuesday. Summer is finally in full swing, the torrential rain is over for now. I spent the afternoon with wonderful friends and happy kids. Thanks to two months of twice-weekly physical therapy my posture is ten times better than it used to be and I look wonderfully normal in the pictures my friend Rosa took at the party when I was blowing out the candles on my cake (not pictured because I cannot figure out how to upload them). My kids are happy and content and ASLEEP. AND my kitchen is full of cake, cookies, and watermelon. I couldn't ask for anything more, honestly.
Posted by Becca at 8:36 PM

Happy happy birthday! I love all of this!

Happy Birthday! I don't comment often, but I just have to let you know how much I enjoy your blog. Thanks for putting a little normalcy and joy out in the world.