1. This morning Wes was in my closet with me helping me pick out my clothes for today. He fingered a blue and red striped dress and asked me "Is this only for when you are pregnant?" I responded, "No, I don't have any of my pregnancy clothes anymore." He seemed alarmed. "Why not?!" "Because I'm not going to be pregnant anymore," I responded distractedly. "WE'RE ONLY GOING TO HAVE FOUR KIDS?!" he wanted to know. "How come on Cheaper By the Dozen they get to have TWELVE KIDS?!" I didn't have a good answer, but was thinking in my head "DUDE, it is SIX O'CLOCK IN THE MORNING."

2. James has this pair of pink cowboy boots that he absolutely adores. He is only allowed to wear them to church on Sundays because they are Very Special and also because his teacher said the heels are too high for school and they were making him trip in the boys' room, a conversation that really deserves its own post except that being told my son can't wear his pink, high heeled cowboy boots to school doesn't register as high on my surprise and amusement scale as it used to. So he had his boots on at church on Sunday. During the service he asked if he could go get an orange crayon out of the basket of crayons they keep in the back of the sanctuary. When he came trotting back to the front where we were sitting, it was quiet and his boots made a clippity-clop noise as he ran. Ryan leaned over and whispered "THE REDCOATS ARE COMING!!" and I laughed so hard my nose started running.

3. The other night I was tucking James in before I went to bed and found a mysterious package wrapped in a pillowcase in bed with him. I removed the pillowcase to find a CANOLA OIL BOTTLE FULL OF *SLUGS*. I am accustomed to finding weird containers full of critters in weird places in my house, so I just took it downstairs and put it on the counter. In the morning we were eating breakfast and I picked up the bottle and asked if maybe the "friends" should go live outside where their food is. Mary looked at me with pity and scorn and said flatly "No, Mama. Those is James's pets."

4. For dinner on Sunday night Ryan grilled chicken legs using a recipe I found in a book I am loving called "A Homemade Year", that is like a tribute to my past when I had time for craft projects and making cinnamon bread and creating magical childhood memories for my (two) children. I am really enjoying the book and I am realizing that I have more time than I think I have. It's helping me rediscover the part of my self that is not living from one trash fire to the next. To go with the chicken legs, I cooked the rainbow chard and green beans we'd harvested from the community garden at the kids' school Saturday morning. It all looked so pretty on the plate I just had to take a picture of it. And this morning when I was uploading it I realized I got just a hint of the Mason jar I was using as a water glass in the shot. Fortunately you know me well enough that my life is way less Pinterest than this. 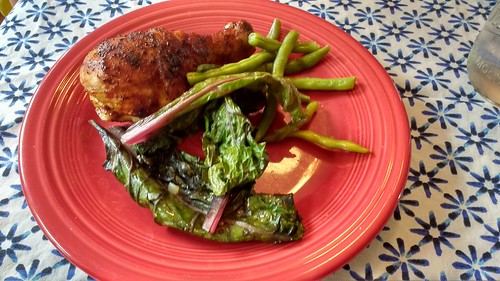 Tonight we are likely having mac and cheese that I harvested from a box and maybe a veggie medley from my very own freezer because I will not have time to stop at the store between working outside the home and picking my kids up at camp, where I abandoned them all day to be raised by someone else (someone else with a pool, canoes, a zip line, and a neverending supply of neon colored chips).

5. Also, how on earth do you cook chard so that it does not taste like literal dirt and take fourteen minutes to chew each bite? Hippie fail.

6. We also made homemade ice cream yesterday. This cozy scene ended when someone put a crayon in the mixer. Later James found the plastic pull-tab from the whipping cream carton in his bowl. #magicalspecial 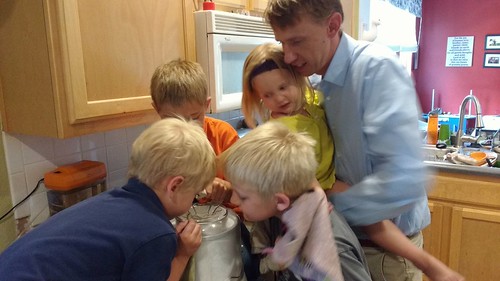 7. Our enrichment activity for yesterday afternoon was to ignore their complaints of boredom, shut the door, and drink a beer on the back porch in our new Adirondack chairs repurposed from our neighbor's trash. It took nearly an hour, but ultimately they coalesced around a plan to build towers out of pool noodles in the baby pool then take turns crashing into them from the slide. It was fun for more than an hour until someone hit someone else in the face with a noodle and then it was time to come in for a dinner of grilled chicken and dirt-lettuce. We have a plan and it's called building character.
Posted by Becca at 7:37 AM

Slugs! You are a strong woman. For chard, I add sugar &/or bacon. And lots of garlic. My kids never eat it though.

I have so many thoughts. Pink is the best color for cowboy boots (Syd's are falling apart and too small but still she wears them.) I <3 mason jar glasses and use them instead of glasses too. Bacon makes everything better, but chard is still pretty gross. Maybe butter and bacon? And I love your character-building plan. A friend opined, and I agree, that we aren't ignoring our children enough. I ignored mine yesterday and found them playing board games. TOGETHER.

Wait a minute . . . how come you get to re-purpose from your neigherbor's trash but the Child Who Shall Not be Named cannot? ;-) Just kidding.

Chard is totally gross unless you top it with something on the sweet side. Try balsamic vinegar and either goat cheese (or parm) or dried cranberries. I sautée my chard until it's soft. It would be good with bacon too (what isn't??) but you'll still do well with something sweet.

I'd love to see a picture of the pink cowboy boots!! Awesome!!

Regarding the chard. Wash it really well, cut out the thickest of the ribs, chop it up rough, steam with a little water then add butter and plain vinegar. Yum. It's all about the butter and vinegar.