More fun than reading about the end of the world

I let the kids sleep in this morning before camp because they are so freaking tired that yesterday at pickup everyone started crying the second the minivan's motorized door clicked closed.  We made a last second decision to turn right instead of left out of the camp that turned out to be the wrong choice because we immediately hit a wall of traffic that didn't let up for miles, which meant that I was trapped in a hot minivan with multiple crying children at 5:30 in the afternoon.  And the gas light was on.

I called Ryan from the gas station we finally made it to like "Dude.  You have got to figure out dinner because I. Justcanteven."

When we got home I told the kids to go change into the comfiest clothes they could find and then come back downstairs for a movie and some pizza, but then the neighbor ladies were getting together and the kids were playing but as it turns out, nope.  The kids were too tired to do even that.  So they hung out and watched a movie and ate pizza as planned.  While *I* hung out at the neighbor's because dang.

Here's some free advice: don't ever laugh at an angry kid in a batman costume, no matter how irrational and hilarious he is being. Just don't.

He settled down by the time we got to camp. It's good they got to sleep late. 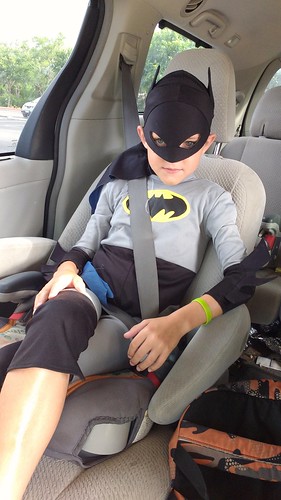 Dropping the kids off later than normal meant that I didn't have time to work out, which is just as well because I'm still full from the two fried green tomato BLT sliders and order of fries I ate last night at ten o'clock with a couple of friends. YOLO.

Yesterday I picked up the little kids early and took them to the pool so James could get some practice in. He wants to take the swim test before we go out of town on Monday. 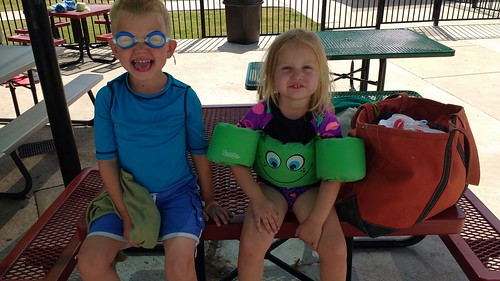 And in other news, today is James's last day of preschool EVER. I'm sure I have some feelings about that buried beneath all the Tired and the Overwhelmed and the Horrified by the International and Domestic Political News. He's ready, but this has honestly caught me by surprise. Isn't he still a toddler? I thought he was still a toddler.

Weekend plans include scraping six weeks-worth of filth off of every surface in the house, finding and eliminating car smell of mystery, taking James to take his swim test, and avoiding all news outlets at all costs (HuffPo has me checking the sky to see if any chunks of it are coming loose. Even NPR is bumming me out today.).
Posted by Becca at 7:50 AM

I love your blog! I only have two, but when I read about your adventures and your kids - even all the crazy - I think another would be awesome. And then I remember I'm not nearly as cool as you :-) I can't wait to read about your vacation!