You guys have no idea how much all the emails, comments, phone calls, texts, and offers of alcohol and refined carbohydrates mean to me. I mean it. You guys are the best. Lesson number one: have good friends and vent all of your junk on the internet.

After spending much of the day Wednesday staring at my computer in a stupor and experiencing a fight or flight response every time my phone made a noise (which was a lot because see above: awesome people), I bought myself an ice cream cone and drove to the camp for pickup. I finally got up the nerve to get out of the car and approach the pickup area, where I found Charley happily sitting on a bench he had made himself at the "carpent-ing" station (his word that is now my favorite), like "What? Yeah it was a good day, why do you ask?" 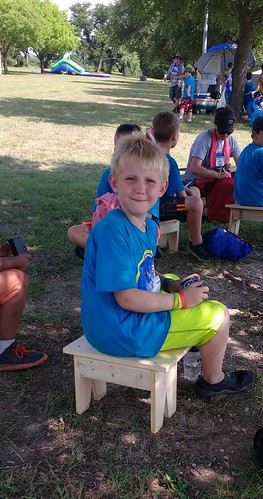 Look at that sweet face, could you just die? Could we freeze time for just a little bit longer?

We picked up Wes and a friend and were invited in for a beer when we dropped off the friend and we had a perfectly lovely evening with earlyish bedtimes and happy children and I was left wondering if I'd made too much of the whole thing. Perhaps something I need to work on is allowing the kid to have a bad day once in a while like a normal person without turning it into a BFD existential crisis. Even though everything still FEELS like a BFD existential crisis, which is I think perfectly reasonable given our experience of the last two years (a realization I had when a psychologist came to talk to our Sunday School class about teenagers' brains and when I described our experience in the broadest possible terms to her she looked me hard in the eyes and asked who *I* was seeing to support *me*. Answer for now: my wonderful, long-suffering friends).

Yesterday was another good day because they went to a waterpark and did some other fun things I haven't been able to figure out and got a ride home with a friend and immediately jumped into our wading pool and ate tacos outside for dinner. We were supposed to have another friend stop by, but they ended up having a conflict which was just as well because around the time they were supposed to arrive James and Wes were engaged in hand to hand combat over, oh, I don't know, splashing? Slide rights? Who the hell knows what they are fighting about all the time.

But they were being really fun and cute for a while: 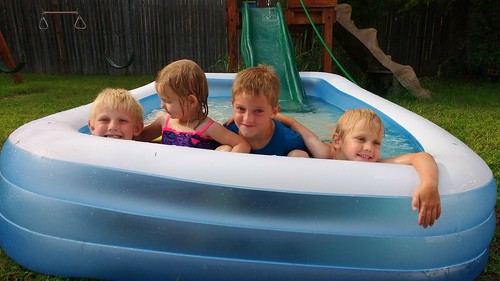 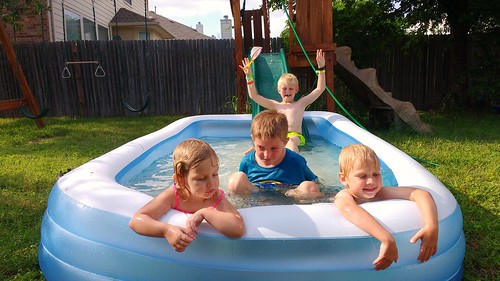 I also took a picture of PTO (Pool Time Out, not Paid Time Off) in the name of journalistic integrity. 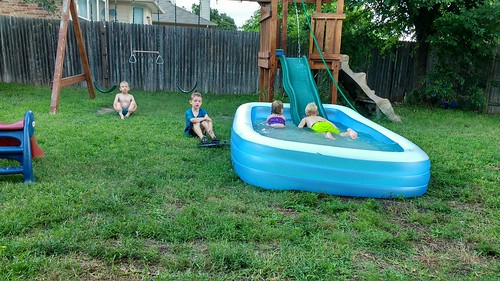 Things came to a head when Wes maliciously let all the air out of the pool. We were upstairs angry-changing into pajamas and angry-teeth brushing when Ryan came home. Today we have after-camp dinner at the pool with friends plans that are absolutely pushing it as far as tired kids go, so next up you can expect either a hilarious rant about the time I had to carry four screaming children to the car or gauzy pictures of magical summer funtime Norman Rockwell #happychildhood #blessed nonsense. It will not be in the middle, this I know.
Posted by Becca at 7:43 AM