Charley has an iPod Shuffle (the little tiny kind with no screen) that he uses in the classroom to listen to classical music during independent work time to help him concentrate instead of getting progressively more anxious and distracted by hearing every little noise and conversation that is going on around him. His teacher and I decided to give it a try a couple of months ago after Ryan and I went to a talk called "The Teenaged Brain", given by a psychologist at our church, that led to some discussion about kids and music and how some kids who have trouble with anxiety or focus issues do better when the listen to headphones because of some brain function reason that was really cool but is escaping me at the moment.

His teacher is a wonderful, wonderful person who is in Charley's corner in every way (which is why when he tells me she yells a lot I say "And? She wants what's best for you so just DO WHAT SHE SAYS.") so when I suggested the iPod she was eager to give it a try. I bought one that night, loaded it with classical piano music (he requested Pachabel's Cannon specifically, but there is a big variety), and sent it in the next day. In his teacher's words "I have NEVER seen him concentrate like that before." And then the day I accidentally took his backpack to work and he didn't have he and the teacher both reported a big difference in his behavior and mood.

So WE LOVE THE IPOD. YAY IPOD.

His teacher, who is wise and experienced, quickly added the iPod to his 504 so it would be ready to go when state testing time rolled around.

(Aside: why do we make it so complicated for kids to do the thing that works best for them? I mean. Do you use headphones at your desk? DO YOU HAVE TO FILL OUT A FORM AND REPORT THEM TO THE STATE?! I like to chew gum sometimes, do I report that to the legislature? This is silly.)

So Sunday night we went to charge Charley's iPod so that it would be ready for the first day of state testing on Monday ONLY TO FIND OUT that we cannot find his charger ANYWHERE. And it's not a normal iPod charger, it's a tiny thing with a USB on one end and a headphone jack on the other. And it is ONLY SOLD at the Apple Store, Best Buy, and online. Which is SO CONVENIENT when your primary hours for getting sh** done is from 9-10 PM the night before something is needed.

So Ryan went to Walmart (gasp!) to see if he could find something that would work. They had a funny little Bluetooth speaker that looked like an alien that had the necessary cord in the box! Hurray! As an extra bonus, its nipples flash when it plays music. 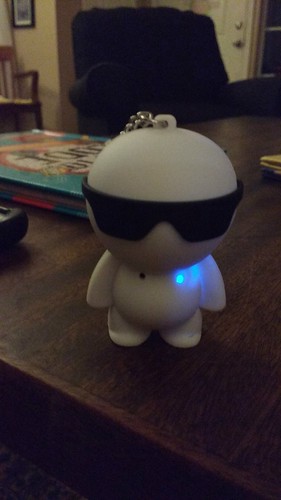 He plugged the iPod in using the new cord and all seemed to be well.

Until I got home from having dinner with the church ladies and discount shopping with my friend Jen at NINE FIFTEEN and learned that the new charger WAS NOT ACTUALLY WORKING and that the iPod was ALMOST OUT OF POWER.

Panic set in. Ryan started ransacking the house looking for the original charger, plugging the thing into alllll the different USB ports we have in the house, and pacing around the living room fretfully.

I unloaded the dishwasher and racked my brain for a solution and then it came to me.

So at nearly ten o'clock at night I posted appeals for iPod Shuffle chargers on our neighborhood Facebook group and our school Facebook group and also texted every friend I know whose husband works at Apple. By ten fifteen Ryan was on his way to Target and I was using all of the project management and logistic skills I learned leading the hurricane field project in grad school to manage the deluge of texts, FB messages, photos, and calls that ultimately led to leads on no fewer than TWO CHARGERS within ten minutes of our house. One was a friend from school and one was a total stranger in our neighborhood who told me he was going to bed but would put the charger in a baggie on his porch for us to pick up.

Several other friends texted me pictures of every charger they could find in case one of them was the right one.

So when Ryan called to tell me he had struck out at Target (even though the electronics employee I talked to on the phone assured me they carried the Shuffle even though THEY DID NOT) I texted him an address and he stopped to pick up the charger from Wes's friend Tommy's house at almost eleven o'clock. He plugged it in overnight and DAY TWO OF STATE TESTING WAS SAVED!

You guys. This proves two things. People are THE BEST. And shared hatred of state testing days is like a blackout or a tornado in the way it pulls communities together to work for the common good.

The takeaway is this: Multiple people sprang into action at ten o'clock on a Monday night to help make my kid's day easier--it means the world to me. A beautiful example of real community. I love where we live (and it's nice to use the community FB group for something other than complaining about people driving too fast and running stop signs, even though those things are super irritating).
Posted by Becca at 9:12 AM

This made me cry.

Today our neighborhood banded together against Lt. Gov. Patrick barging into our town tonight and demanding our superintendent resign over some measures taken by the school board to protect transgender students and people STEPPED UP and flooded the school board meeting in support of the superintendent and the school's (legal and necessary) policies. It was beautiful.

This made me cry, too.