So pretty much I'm working, thinking about work, and eating popsicles

Goodness, you guys. Apparently this summer I am not going to have time for either working out or keeping up with this blog. Which is why you haven't heard from me in two weeks and my butt is slowly turning back into the consistency of refrigerated cookie dough.

Classes are out for me and summer research has begun. My students and I kicked off the summer by traveling to Houston to learn to launch weather balloons. It was super fun and I learned a lot, but when I got back I found that Charley was NOT HAPPY about me being gone and was doing some acting out at school. This also manifested itself in kind of a squirrely weekend. There were some good moments--my friend's graduation party was really nice and fun, and the kids' piano recital was fantastic (even though I thought it was on Saturday, so we left the graduation party, changed the kids' clothes in the car, then spent enough time waiting in front of the piano teacher's house to get into a loud fight about being too loud, before going inside and realizing that we were supposed to actually be there on SUNDAY. Anyway, the actual recital was just the best. I love watching them be so proud of their hard work, and they really do work hard). But we had friends over for dinner Sunday evening and our kids were COMPLETELY OUT OF CONTROL. I was counting the SECONDS until they finished eating and could be banished to the back yard. 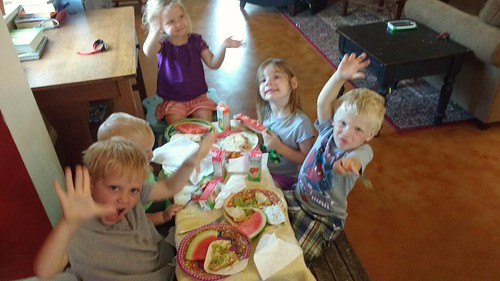 The kids' table. A harbinger of insanity to come.

Monday morning I took James to his kindergarten preview day, which was HYSTERICAL. 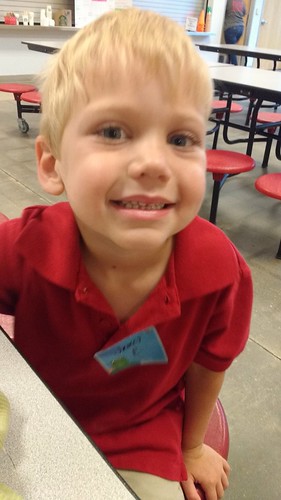 He was, like on eleven, which is normal, but when he ran into his best friend from preschool he went to a twenty-five. And when the principal came into the cafeteria to call all the "froggies" back he shrieked "BYE MOM!!!!" then ran crashing through the line of apprehensive kids, one of whom was sobbing in terror and hanging onto his mother's leg.

By the way. James was completely fine, but for some reason, probably related to travel and Charley and a bunch of other things, I was kind of a mess. And then the seniors paraded through the school in their graduation regalia and there was no kind of about it. 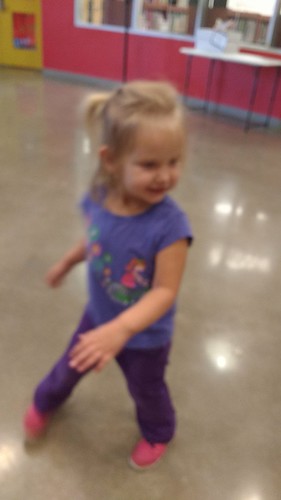 James came back and leaped into my arms. He hasn't stopped talking about kindergarten yet.

We celebrated with shirts-optional popsicles after dinner. 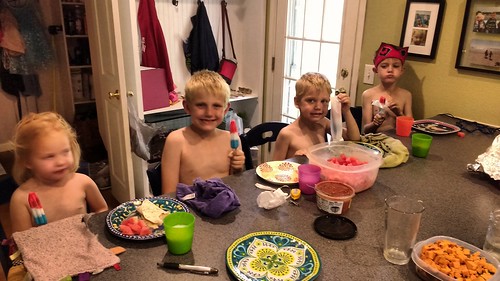 (Mary thinks everything is shirts-optional, including restaurants and church)

The kids had their Last! Day! Of! School! on Wednesday, which means I now officially have a 4th grader and a 2nd grader (phew!). I went to their class parties, partly because they wanted me to and mostly because their teachers are amazing and I wanted to thank them in person. I was glad I was there because they had an unexpected fire drill and had to evacuate the building until a HOOK AND LADDER firetruck pulled into the parking lot to give the all clear (it was all clear). Charley is really anxious about fire drills and Wes needed someone to hold the giant bowl of ice cream he'd just made for himself, so it was good for both that I was there.

The first day of summer break I woke the big kids up early so they could come to physical therapy with me. Then they spent an exciting day hanging out on campus with a new babysitter I arranged for sight unseen on Facebook (who was wonderful). The first thing they did was make mods on the catapults my students built this semester. 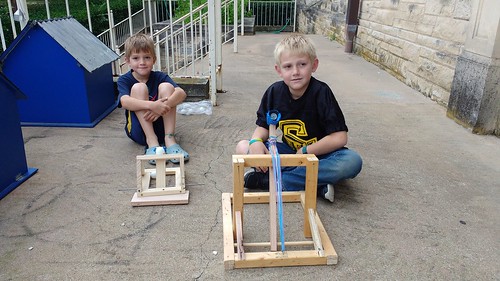 They also went for long scooter rides, watched a couple of movies on the big screen in a classroom, and had lunch in the dining hall. Best day ever. Today James joined us because he had a doctor's appointment in the morning and it just seemed easier to take him with us (verdict: kinda). It was raining so they began with a Dr. Who marathon then retired to the student lounge for board games and sub sandwiches that I brought in. Charley FINISHED THE LAST HARRY POTTER BOOK, they went for a long walk/scooter ride, they made some projects out of materials I scavenged from my office, played with my student's dog, interrupted multiple conversations, and then finally it was time to go. We spent the afternoon at our favorite hamburger/beer/playground place because THAT'S WHAT YOU DO AFTER ATTEMPTING TO BE A PROFESSIONAL WITH KIDS IN TOW FOR TWO DAYS. #leanin #toalcoholism

We have very light plans this weekend, which is really a misnomer because my actual plan is to REGAIN CONTROL OF THE HOUSE which has kind of suffered between my trip, a brief stomach bug that had me going to bed at the same time as the kids for two nights, and my summer research project, which renders me completely useless the moment I get home. Also the kids have a birthday party for a friend.

I'll leave you with this picture of Mary doing Mary things while I was attempting to work on piano with one of the big kids. 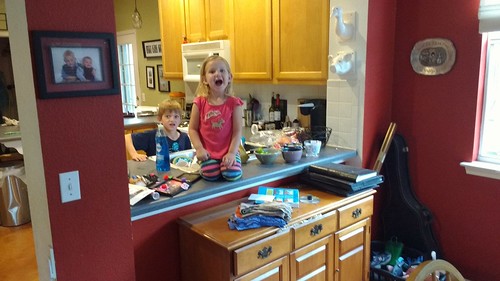 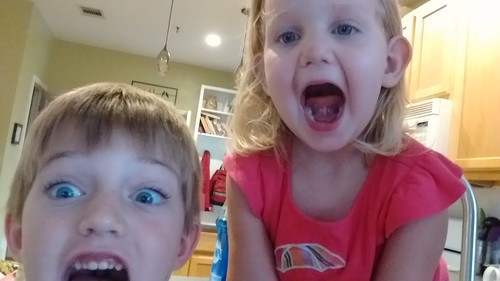 And OH, here's the view just outside my office door today. It was so sweet! 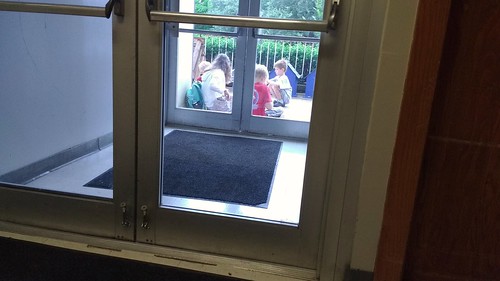 Super jealous about having your kids at work with you, though it's probably more fun in theory than reality. And no hashtag has ever more perfectly summed up the current state of my work/life balance. #leanin #toalcoholism #truth