A little girly brunch fun and a lot of mud

Well! Other than the fact that I ended the day by closing James's bedroom door as he screamed viciously in my face "YOU DIDN'T CHANGE MY SHEETS YET!!" it was a pretty good weekend!

Today was a sweet, simple Mother's Day. My favorite yet! Charley made scrambled eggs for the family, Ryan contributed donuts and beautiful flowers and a card that all the kids signed. We ate breakfast together around the big table (usually we eat in the kitchen, with the kids at the counter and us standing up at the ready like footmen) then had a fighty ride to church. An hour apart for Sunday School was just what the doctor ordered and by the time we got to big church we met up with Ryan's mom and dad and had a nice time.

And then it was time to begin the awkward dance called Choosing Where To Eat After Church. This was considerably easier in our college town, where we lived for nine years, because the only question was "Are your parents in town?" (Olive Garden), "Are you feeling fancy?" (Chili's) or "Are you feeling poor?" (Sonic). Now there is a HUGE RANGE OF CHOICES. But today is the one day a year I decided to not apologize for having preferences and suggested a nice-ish brunch place that we never go to because there is always a wait and I am crowd averse when we go places with the kids. As it turns out, the wait was not really a big deal and lunch was amazing and totally worth it.

I mean. They managed to find a way to sneak a few extra calories into Eggs Benedict by replacing the English muffins with CRAB CAKES. OH YES THEY DID. As I said to the waitress, with a startling amount of enthusiasm, "Bring on the Hollandaise! There will be NO KALE on Mother's Day." I also had a frozen Bellini. It did not suck. 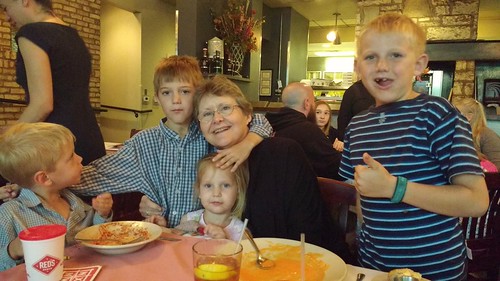 So nice to spend Mother's Day with Ryan's parents! 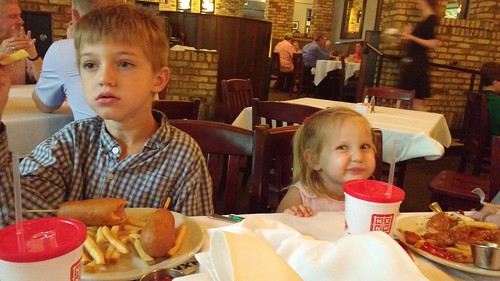 This place had TABLECLOTHS. It was the real deal. 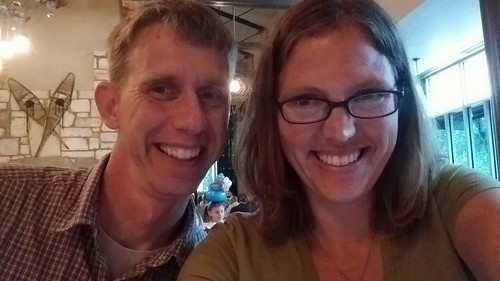 Ryan and I were there too! Like the ski lodge motif? In the middle of Texas?

They had a guy making balloon animals. Light sabers for everyone! Wes COULD NOT BELIEVE how cool we were being. I blame the presence of the grandparents. And the Bellini. 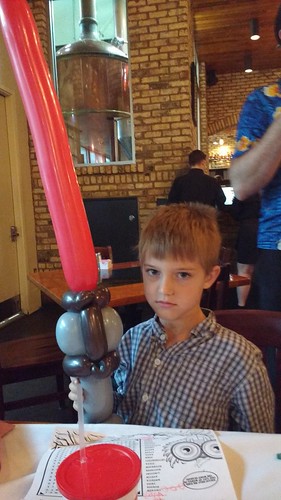 I mean, what could possibly go wrong in a cross-table balloon light saber battle? 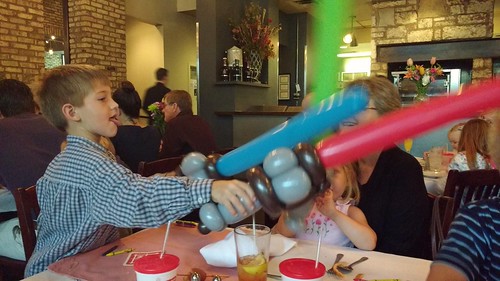 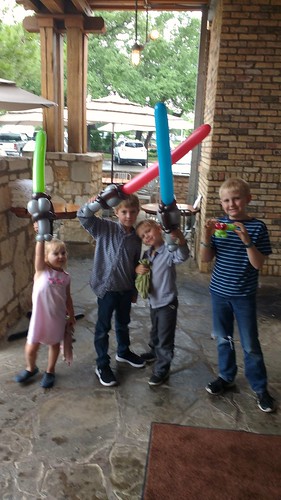 We spent the rest of the day lying around and cooking and letting the kids ignore their chores which will almost certainly come back to haunt them tomorrow when I step on a sticky bathroom floor and have a conniption.

Yesterday morning we decided based on peer pressure that it would be fun to participate in the Muddy Miler Family Fun Run. I didn't know much about it except that it was only one mile long, featured lots of mud obstacles, and was free, which was more than enough motivation to get everyone in the car by 7:45 on a Saturday morning.

We took a before picture on the way to the start. You cannot see any of the obstacles at this point. 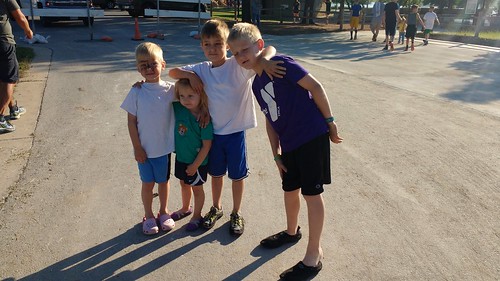 After waiting in line for about a half-hour, we ended up at the starting line. They blew the horn and all admonitions to stay together as a family went right out the window. Wes took off like a shot, leading the entire pack of adults and kids all the way to the first obstacle, which was probably about half a mile. Charley and I were about halfway back and Ryan, James, and Mary were limping along at two-year-old speed in the back. Charley and I caught up with Wes at the top of the first obstacle, which was a giant slip and slide down a hill into a thigh-deep mud hole. Wes had already gone down and was climbing back up the hill to go again. Charley flung himself down as soon as we got there. It took me a few seconds to overcome my body's strong "WTF" reaction but I finally slid down into the mud. You guys. It was the GROSSEST FEELING. But not nearly as gross as attempting to RUN with shoes, BRA, AND UNDERPANTS full of mud.

It was absolutely as fun as it was disgusting.

The next obstacle was chest high wooden hurdles in the middle of another mud pit. I flung myself over them and boosted Wes over them one after the other. It was absolutely the most athletic thing I've ever done. Ryan later told me that Mary tripped and fell into just the EDGE of that mud, stood up, looked at her muddy hands in HORROR, then looked at him, then refused to participate any further, begrudgingly following along behind and walking around the sides of all the obstacles. Charley was an entire obstacle ahead of us having the TIME of his LIFE.

The next obstacle was waist-deep mud troughs full of ice that you could not see until you were in it. It was special. Then was the thing where you have to army crawl across an area the size of a tennis court on your belly in thick mud. It was surprisingly slippery and hard, especially because I was holding a pair of kids' shoes in each hand. Wes did it three times while we waited for Ryan and the little kids to catch up. The last few obstacles were the muddy tire run, climb up the muddy rock wall, ford the small muddy river, and scale mud mountain then slide down the other side (this one was called the Final Assault).

I lost the kids multiple times because I could not see their faces nor the faces of any other similar sized boy-child in the whole place. When Charley smiled you could tell it was him because of his lone, pearly white, front tooth.

It was easy to find Mary because she was still clean and usually standing off to the side, regarding us with a bored scowl. 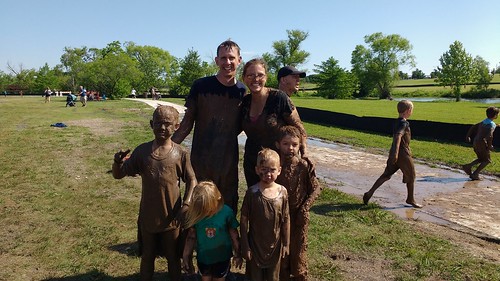 Mary denies that she has a family at all. Refuses to show face in picture alongside total idiots. 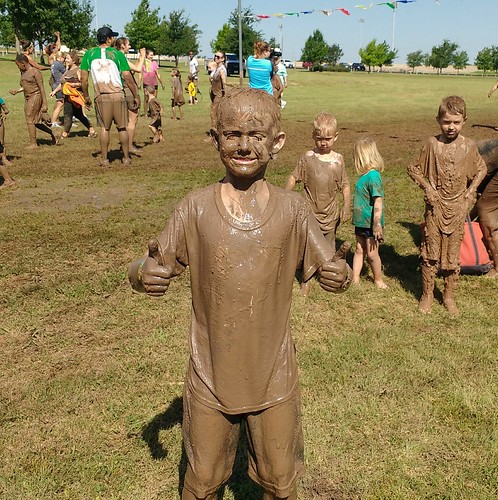 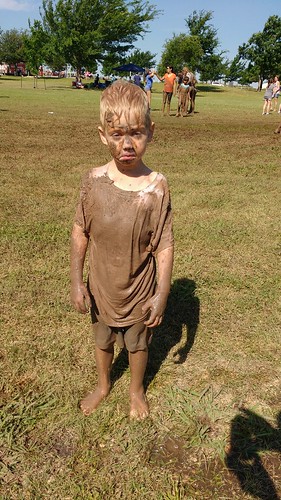 I would do it again right now.

The punchline to all of this is that we were attending my mother-in-law's choir concert immediately after the mud race. I thought we would have time to go home and shower first, but it took longer than expected, so we ended up changing everyone in the car after washing off as best we could in the sprinkler stations (me, James, and Mary) and the lake (Ryan, Charley, Wes). We did a pretty good job, but Mary looked like a street urchin and Ryan used the time we spent in the hamburger line at the concert to scratch chunks of mud off the backs of my arms. But at least I'd remembered to pack a dress!

I found mud in Wes's ear while we were at church this morning and Mary fell asleep for the night at five PM. A good weekend.
Posted by Becca at 6:50 PM

You folks have so much fun! I'm all over with envy (the nice kind).
Delightful to read about this.

Your family pictures after the mud race made me LOL. Mary's disdain is hilarious. Looks like so much fun!