I KNOW I am forgetting something.

James is really killing me right now. In many ways. Yesterday was a perfect example of his manic alternation between freaking adorable and freaking insane. I won't spend a lot of time talking about the epic tantrum he had at my parents' church yesterday morning. He had spent the night at my parents' house and we met at their church in the morning. The moment he laid eyes on me he exploded with happiness. "NOW WE HAVE TIME TO GO TO COHEN'S BIRTHDAY PARTY!" he shrieked even though 1) We absolutely did not have time to make it to Cohen's birthday party and 2) I had already explained this the day before. And the day before that. But HOPE SPRINGS ETERNAL.

What happened next was quite the embarrassing display of crappy behavior (while screaming, he threw himself on the ground and deliberately tried to trip me as I walked past him) and possibly, though the details are fuzzy, crappy parenting, which culminated in me locking him in my car then standing just outside until the screaming and kicking stopped. I may have referred to him as an a**hole. To my dad. While standing in front of their church. #winning. Later he calmed the heck down, allowed me to dress him in church clothes, and let me take him in.

Later that day I was out in the driveway getting ready to repot some flowers into a ceramic pot. James ran out, eager to help. I showed him how to get the plant out of its original pot and together we scooped handfuls of potting soil into the new pot. It was all done and I asked him to please go get some water to give to the plant and he skipped off toward the house. Twenty minutes later, I was ready to go to take the plant to a friend's house. I had been talking to Ryan and assumed James had forgotten about the water. I took the plant to the van and was just about to leave when James came around the corner from the back yard, carrying a COMPLETELY FULL watering can, his clothes soaked. 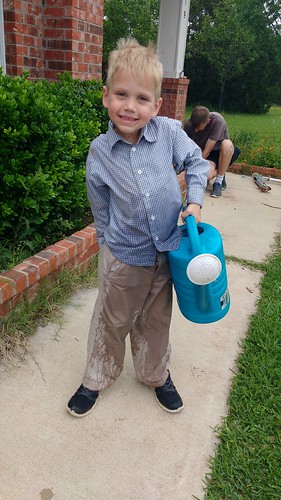 "ALMOST THERE!" he grunted. He grunted with effort all the way to the driveway. I got the plant back out of the car so he could water it. He dropped the watering can at my feet and exclaimed "MAN! THAT WAS HEAVY! I FEEL LIKE AN OLD MAN!" This kid slays me.

Later he would spend thirty minutes painstakingly dicing a bell pepper with my chef's knife. Thirty minutes that were as terrifying as they were extremely sloooowwww. You could make a meditation video of a kid cutting up vegetables. Though it wouldn't be as satisfying as that pressure-washing one. I tried to show him how to cut it into strips, then to line up the strips and cut them all at once by saying "Let's lie down together and go to sleep, bell peppers!" as I lined up the strips. He joined in, trilling "And then we're going to sneak in and cut you in half with a big knife, bell peppers!" Erm.

Our weekend was kind of ridiculous, as weekends have been tending to go recently. Ryan came home Friday afternoon and walked into a PACK of kids, my two friends, pizza, brownies (my friend Rosa made THREE KINDS and they were all amazing), beer, watermelon, and associated revelry. 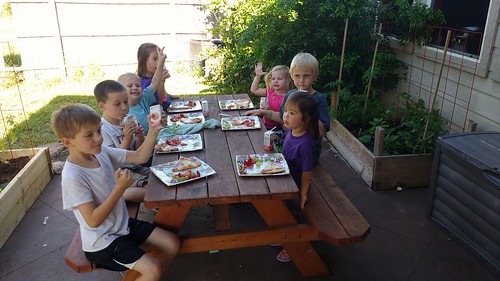 Does not do justice to the level of chaos.

Then he and the big boys left for a Scout campout while the other ladies and I put on a movie for the kids and hung out in my kitchen before giving all the kids baths upstairs (girls) and in the back yard (boys, James: "THIS IS THE BEST PARTY EVER!!"). Saturday I had a work thing in the morning followed by brunch with the little kids and our friend Peter, which is always a treat. We took the kids to the playground when the restaurant started filling up so they could get stuck on the spinny chair thing and start screaming. Then the kids went over to my parents' house and I came home. A friend whose house had FIVE SHOWINGS Saturday brought her two kids over so we could all veg on the porch. Then I left her at my house with instructions to stay as long as she wanted, even promising to open a new bottle of wine when I got home, to go to another friend's birthday party at a nice outdoor restaurant. That was a magical night too and we only left when the servers started clearing their throats about forty-five minutes after closing. Sunday morning was church with my parents and then the campers came home and we all relaxed in the back yard some more. We are relishing this in-between weather while it lasts because soon the porch won't be so inviting.

Now it's Monday and I have a frillion things to remember and do, like the fact that MY LAST CLASS OF THE SEMESTER STARTS JUST TWENTY-FIVE HOURS FROM NOW. And that means I have to get ready for summer research, which is, um, so far not going according to plan. GOOD TIMES. And freak, I just remembered that I made plans to do something "mid-May" and I am not sure if it is the thing I am already thinking of or if there is something else. BETTER GET BACK TO IT EVEN THOUGH I REALLY JUST WANT TO GO BACK TO THE PORCH.
Posted by Becca at 7:01 AM