Just got back from our annual weekend at church camp tonight and it there is anything that makes it worth it to endure a three hour car ride with four over-tired, over-sugared children who inexplicably cannot fall asleep, it's church camp.  The kids talk about it nonstop as it gets closer.  James calls it "the place where I fell off the bunk bed and hurt my foot and had to wear that thing around my ankle for the rest of the time".  The other kids call it church camp.  It is really a retreat that our church takes once a year.

This year was even better than years past for several reasons.  Mainly: instead of the kids' summer campsite where it is usually held they put us in this other place that more closely resembled a family resort than a camp.  Seriously.  We used to stay in a room full of bunkbeds and share a tiny bathroom with another family, which was totally fine, but this year we had a giant cabin with bunk beds, trundle beds, a couch, and a KING SIZED BED along with two full bathrooms.  We shared it with one other family and it was SO PERFECT.  And there were two playgrounds (one with a FENCE AROUND IT AND ROCKING CHAIRS IN THE SHADE) and in addition to the usual river swimming they had a series of wading pools connected by waterfalls for the younger kids AND A WATERSLIDE.  IT WAS A HIT FOR ALL OF US.

Sadly I don't have many pictures because I spent all afternoon Saturday at the waterfront with the three boys while Mary (and Ryan) napped.  I volunteered for this because I usually spend Saturday afternoon hanging out with my friends on the river watching the kids swim.  What I was not expecting was that Charley would spend the day spending terrifying amounts of time out of eyesight IN A KAYAK.  But nevertheless every time I gathered the other two kids and started to get into a canoe to go look for him, he paddled back around the corner, happy as can be.  I had to remind myself that he is ALMOST TEN about sixty million times.  Anyway, hoisting wet kids in and out of a river while having a continuous low-level panic attack is not conducive to photography.

Also, James kept falling and hurting himself and screaming.  Nothing major, but the lifeguard still came over to check on him every time to confirm that NOPE, still no real injury.  Later James climbed onto a stand-up paddleboard and accidentally floated out into the middle of the swimming area with no paddle and no clue about how to get back to the side (had his floatie on).  He started shrieking again and Wes ran in to rescue him, but the lifeguard ran back over to see what was going on.  As we watched I said to her "I bet you'll be glad to see us go back to the lodge! Heh heh heh," and she just made a noncommittal noise and walked away.

Anyway, we spent so much time swimming in the FREEZING river on Saturday that the boys' lips turned blue and they were so tired they could barely climb the stairs back to the lodge to get their dry clothes on.  I sort of remember shivering then extreme fatigue as two symptoms of hypothermia (along with blue lips) from long-ago first aid training so I was a little worried but then they went inside and had some churros and hot chocolate and seemed fine.

After swimming and snacktime some other ladies and I corralled all the two year olds into the fenced in play area and sat on the porch for a while.  This fence was an INGENIOUS ADDITION TO CAMP.

After dinner Charley asked if he could go back in to work the dish room again.  Everyone gets a job assignment while they are at camp, like washing dishes or sweeping. You do it one time, usually around a meal, and then you can relax for the rest of the time.  Charley and I had dishwashing at Saturday lunch.  Charley has found his calling.  I just stood back and watched as he and a couple of other kids loaded up the trays, sprayed them down, slid them into the dishwasher, pulled the lever, then unpacked them on the other side. He was always ready with an empty dish tray and was confident and helpful showing the other kids jobs they could do.  He was IN HIS ELEMENT, which was incredible to watch and also hilarious because DISHWASHING.  He went back to wash more dishes Saturday at dinner and tried to go today at breakfast but it was too crowded.

I don't know what Wes's job was.  We only really saw Wes at mealtimes because he spent the entire weekend with a pack of kids on razor scooters tearing around the sidewalks, going up and down the ziplines, playing Gaga ball, and eating LOTS AND LOTS OF JUNK FOOD.  We call him the big brother of the neighborhood because he really loves helping younger kids with things.  He had so much fun running kids back and forth on the zipline and pushing kids on swings.

James bounced between us and a few other families, enjoying his friends and the camp.  He loved the suspension bridge and the treehouse and swimming in the river and the wading pools.  Mostly he loved that his best neighborhood friends came with us and he got to play with them for forty-eight hours straight.

Mary decided to leave our family and spend the weekend with our cabinmate family, my friend Rosa and her kids.  Probably because Rosa has two girls close to her age and fussed over Mary's hair the first morning of the trip.  Mary can sense that we know nothing about girl hair.  Watching Mary with pseudo-sisters was fascinating.

Last night we had a campfire with smores and a sing-a-long, which I think I've told you before is the highlight of the whole trip for me.  Ryan hung out at the fire and I set up camp with my friends at the sing-a-long and the kids ran back and forth and all around.  Finally around 9:30 we reluctantly shooed everyone back into the cabin for bedtime.

Wes was disappointed that he hadn't gotten dessert that night and when I asked him if he'd had any smores he responded "Only THREE!" with great indignation.

Bedtime went REALLY FAST Saturday night, which was good because afterward our cabinmates and I hung out on the back porch and ate cupcakes until almost midnight.  The cabin full of PhDs outlasted the boys' youth cabin across the lawn, BOOM.

Charley woke up still wearing his swimsuit.  He had charred marshmallow goo matted into his eyebrows.

This morning after breakfast and chapel I was standing by the playground wishing we didn't have to leave, which was a new feeling because as fun as it is, I am usually ready to lock the kids in the car and skedaddle the moment the benediction is over (which, incidentally, instead of his usual benediction today our pastor said "Don't forget to check out of your cabins and pick up a hot dog and a Coke for the drive home!") because by the time we get to Sunday they are WRECKED.  But today felt calmer and happier and the weather was nice and I was not in a hurry to go back to reality.  But not TWO SECONDS after I told Ryan we should hang out a little bit longer Mary had a potty accident and Wes began screaming at me.  TIME TO GO!

There was not nearly enough sleeping in the car on the way home (lots of bickering, backtalk, and pillowfighting (OMG) but only Mary slept), so Ryan suggested we stop at a brewery we like on the way and get me a tasting flight as a reward for me not jumping out of the car and running screaming into a field of wildflowers.  So lunch was awesome.  The rest of the drive continued to be terrible until we were thirty minutes from home and I decided that instead of trying to keep them from bickering we were just going to crank the radio and ignore them.  It really lightened the mood.

Then we got home and put them to bed at 6:00.  James fell asleep before 6:07.  Everyone else was close behind.  I am already ready to go back.

Here are the four pictures I have! 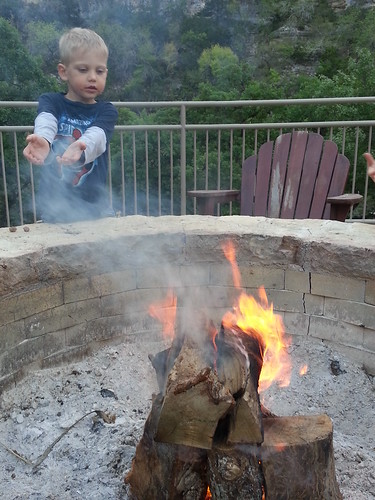 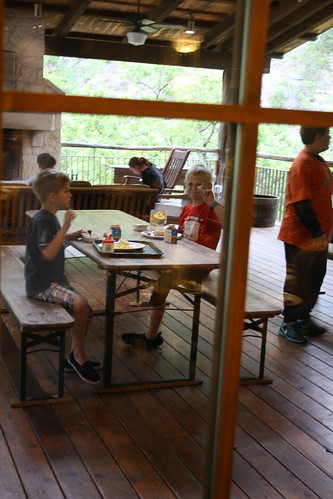 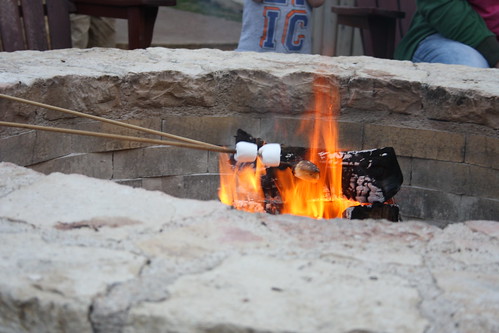 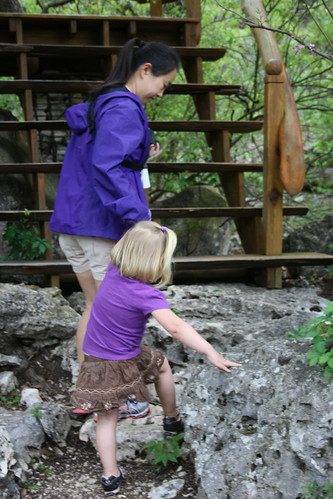 This camp sounds amazing! Would you mind saying where it is? My husband is a pastor in the Houston area and it sounds like a great place for either our youth group or our whole church.

I always love your family camp posts! Do people with older kids go? How amazing would it be if you guys are still going in 8 years when Charlie is a full blown adult?!