We had such a fun weekend that Charley assumed that we were back on Spring Break and when he found out this evening that tonight was a school night, he asked me incredulously "A school night for ME?!" then walked away from the game of frisbee he was playing with Ryan and stomped into the house. The next hour before bedtime was delightful.

Ryan and I have a friend we've known since we were in a choir he directed when we were in college in the late nineties. He is a great, funny, wonderful friend and composes beautiful choral music too. When we found out he was going to be in a performances of one of his compositions in Waco, just a couple of hours away, we decided to head up there and go see it. A couple of complicating factors were that the performance was at night and was a solemn and contemplative service in a church that ended with a minute of silence and total darkness. This is fine for Ryan and me, but obviously a bit of a problem for the kids. We tried to find a sitter and when that didn't work out decided to just wing it and planned to spend a lot of time in the lobby if necessary.

We left a little after lunch and Mary quickly settled in for a nap. 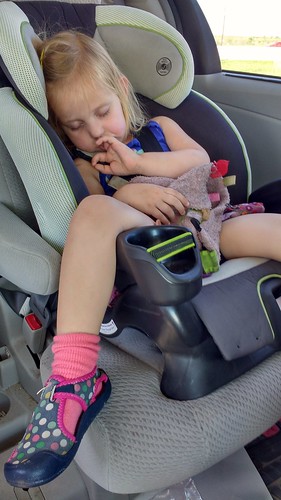 Know who did not nap? James. You know who can talk continuously for an entire ninety-minute car ride? James. So restful!

We stayed at a Residence Inn, which was a little nicer than usual, but it had an indoor pool and a big-ass suite with two bedrooms so we decided to go for it. I was extra happy with this decision at 2 AM when Mary woke up in a panic about something and couldn't calm down for two and a half hours. Lots of doors between her and the other kids was a VERY GOOD THING. I was tempted to make her a cozy nest in the bathtub and go back to bed myself. Kidding. Not really. Bonus: Ryan's parents came down to meet us and were staying right down the hall. The kids loved running back and forth between the two rooms. So did everyone else in the hotel, probably.

We got all fancied up and went out for dinner before the Tenebrae service. 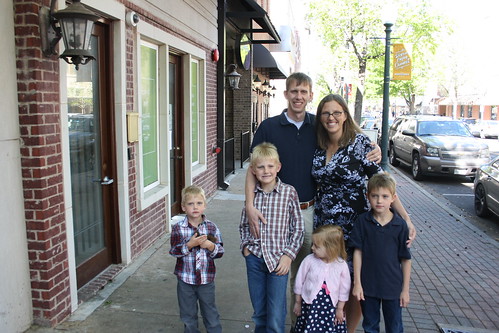 I don't know why poor James is off to the side like that, but I do like the way Mary seems concerned.

The kids were stymied to be at a restaurant with no playground. 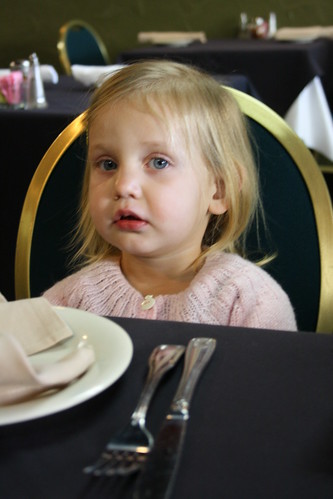 But not to worry, James and Wes found a way to put their personal touches on the experience. 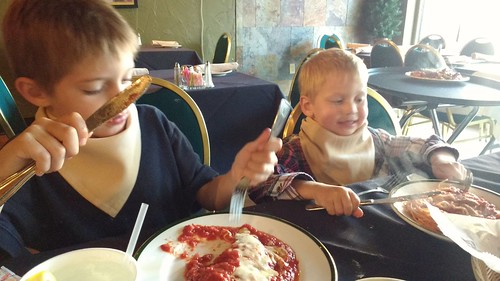 We headed to the church after dinner and arrived about thirty minutes early, which allowed the kids to get involved in stuffing easter eggs with some other kids from the church. 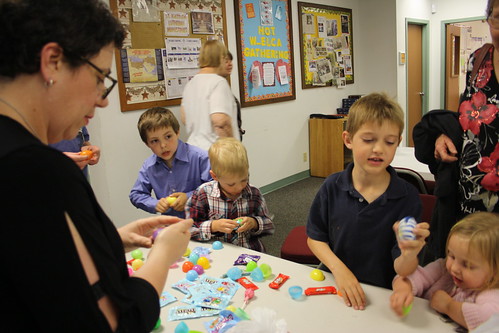 When that was done, Wes and a kid I'm calling Waco Wes found a box and invented a game where you lock a kid inside the box, then pile stuff on top of it, then yell "break out!" and the kid in the box has to shake all the stuff off the box to get out. I think it really helped set the tone for the service. 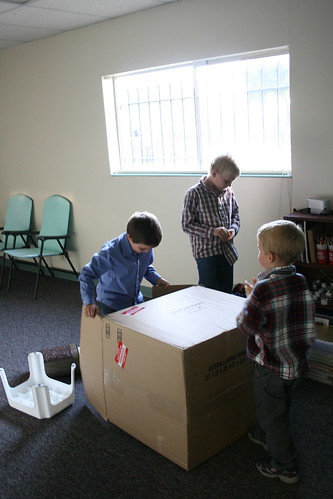 The service was beautiful and moving and weirdly, totally fine for the kids. I only had to take James out one time and the lady behind me who I thought was "shushing" the kids repeatedly turned out to have been sneezing (?) or something because she gushed over the kids' good behavior as we walked out of the sanctuary at the end. The somber themes of death and darkness and the way the acolyte put out one candle after another with each movement before finally blowing out the Christ candle at the very end, plunging the sanctuary into darkness went right over their heads, but I found it very meaningful. The contrast between that service and the celebratory Easter morning service was incredibly powerful. I will be going to our church's Tenebrae next year for sure, but I'm going to plan a weekend away for Palm Sunday because that one has always bugged me.

As we walked out of the sanctuary in silence with the other congregants, James, who had been bugging me about being thirsty for the past thirty minutes, exclaimed cheerfully "I NEED A DRINK!"

We put the kids to bed then went out for drinks with our friend the composer and two of his friends and had SO MUCH FUN. We made it back to the hotel to relieve Ryan's parents around 11:00, watched a couple episodes of House Hunters (our hotel tradition), then went to bed (reluctantly, because I really wanted to see what the family of seven did in a Tiny House). Mary woke up a couple of hours later and didn't fall asleep for more than two hours of me nodding off only to be awakened by a tiny foot to the stomach or a urine-scented lovey draped across my face. After she raked her fingernails across my throat for the second time and I said "GENTLE. HANDS." in a barely controlled voice, Ryan took her to the living room, brought James in with me, and let her have the sofabed to herself. He slept on the floor in a pile of couch cushions but she finally fell back to sleep. Delightful.

After breakfast we went to the zoo. 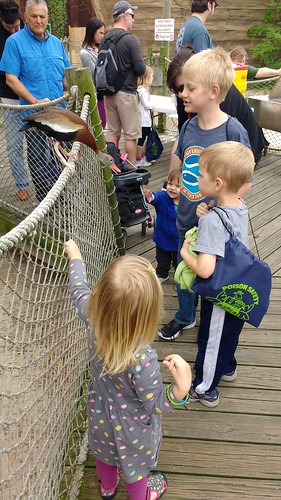 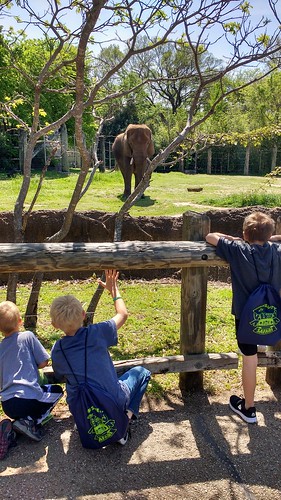 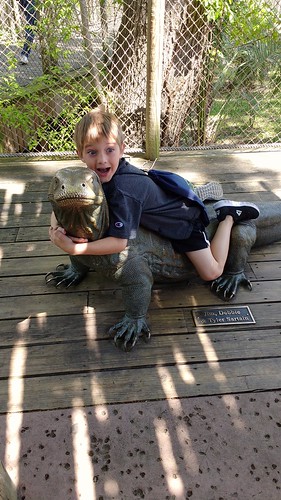 This is my favorite zoo in the WORLD. The perfect size for the kids, great exhibits, and lots of shade. Last time we were at this zoo a couple of years ago a lady tapped our nanny Miss N on the shoulder and said "I think your kids are fighting" and she turned around to see Charley and Wes rolling around on the ground punching each other in front of the gorilla exhibit. This time was much better. They made it all the way back to the car with no lunch and no screaming. I feel like this was worth noting because we don't usually do anything without at least a LITTLE screaming. So, so fun. The elephant spent like five full minutes flapping his ears at us. The best.

We had lunch at a Mexican food place with a deck overlooking the river. The weather was perfect and the food was great. The perfect end to our trip.

The kids even worked together to pull this giant stick out of the water. And NO ONE accidentally-on-purpose fell in! Sigh, they are growing up! 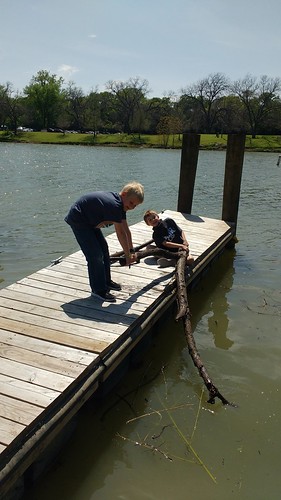 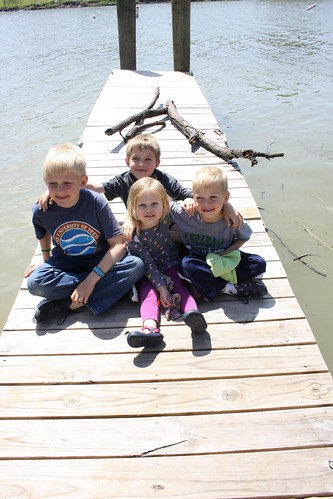 We arrived home in time for a quick dinner and bedtime and then all the usual Easter preparations. I went into C and W's room around 8:30 to make sure they were asleep and they both sat up and asked me "Is it morning yet?!"

After our egg hunt we made everyone get together for pictures. This one made me think of a Billy Joel video (Uptown Girl?). 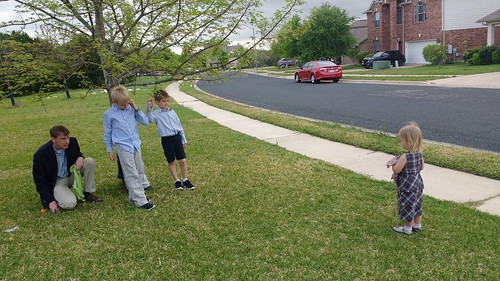 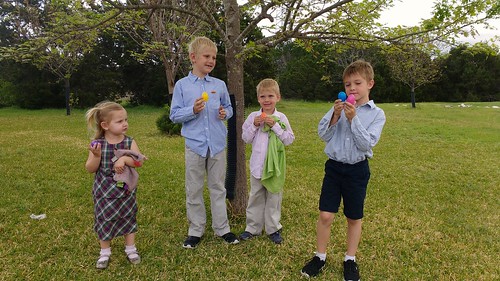 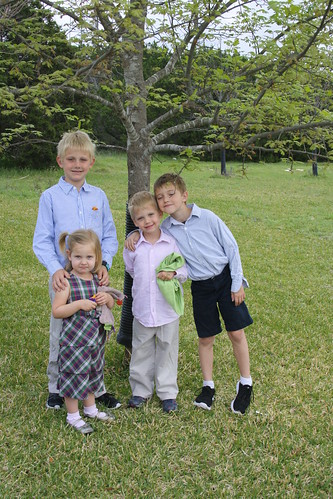 And there they go again. 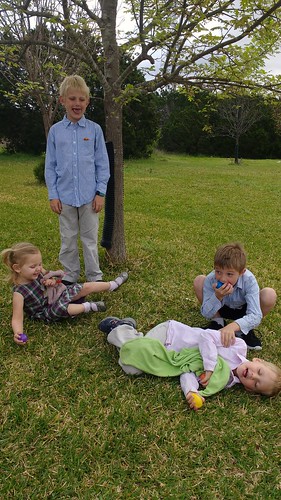 They thought they would get to sit outside for church. 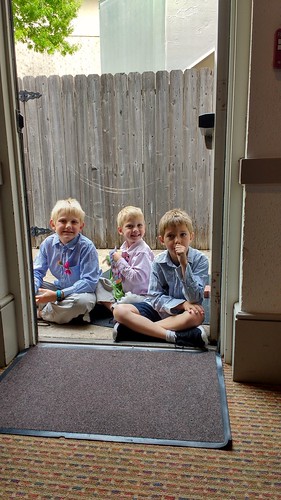 We went to my parents' house after church for the traditional brunch and sock-easter egg hunt where every egg contains one sock and they have to match them all up at the end. Had a great time followed by a massive showdown in the driveway that required at least one kid to apologize to a grandparent for outrageous rudeness. Everyone was crying as we pulled out of the driveway, which means they had a great time.

When we got home most of our friends were outside; Charley and Wes joined in a pickup game of cricket a few houses down, James and Mary and Ryan and I went across the street for water table and driveway hanging out fun. It was all very relaxing and summer-like until I realized it was six o'clock and no one had eaten dinner and it was a school night. I made a joke about it being a school night and Charley stopped mid-frisbee toss and stared at me, mouth agape. "It's a school night for ME?!" he shrieked. Then he walked away from the frisbee game and stomped into the house. He spent the next hour and a half yelling at me for telling him we were on the second spring break (um, no?) and loudly complaining about having to go back to school. Mercifully, bedtime came EARLY EARLY EARLY again and this morning went more smoothly. Wow.
Posted by Becca at 6:47 AM

Love this so much!