Having a little trouble getting rolling after sloth-week, I mean spring break.  It seems that no one in my family ever actually adjusted to DST, since we had the entire week off together (not Ryan, but without the extra school dropoffs he could sleep an hour later than normal too).  Last night I was making dinner at 6:10 and noticed that everyone was still cheerfully running around outside and not hanging around in the kitchen trying to steal yogurt tubes.  Aww, they still think it's 5:10!  Boy will they be surprised when bedtime happens in ninety minutes!

Speaking of dinner, I made Asian lettuce wraps last night.  Now.  Lettuce wraps are one of my favorite things ever and it's the thing I normally order when we go to a casual Chinese restaurant.  But I was not expecting the family to scarf them down with quite the enthusiasm they did last night, which makes me wonder--I have had a few hissy fits related to people hating dinner and being generally obnoxious during this one single thirty-minute period that I expect them to sit down and be pleasant every day.  I mean, all the experts say that if you have family dinner every night *your kids* are less likely to be on drugs, but did they ever study the effects on the *parents* of enforcing this daily special family (torture) time?  I mean.  Children of alcoholics don't fare much better than kids who don't eat dinner together every night.  Is this a hole in the research?  I might have found a new research trajectory!

So anyway, dinner behavior has been better?  I think?  Except Mary, who last night flung her lettuce leaves aside and declared "I DON'T WIKE DIS" before looking at me with scorn and pity.  But the boys seem to have caught on that if they want to stay downstairs past 6:15, they better not act like morons during dinner.  Charley has declared me to be "the best chef who has ever lived" and Ryan gushes endlessly over even the most meager of offerings "These are truly the best hot dogs I have ever tasted.  Is this Hunt's ketchup you bought?  Delicious.  Just delicious."

And now I am wondering, are they scared of me freaking out?  And, is that a bad thing?

I honestly don't know.  My cooking ability has improved TREMENDOUSLY since the early days of our marriage when it once took me two hours to create a truly disgusting beef stroganoff (I tried to use my new wedding present food processor to *chop an onion*.  It turned into a watery paste.) and I relied almost entirely on frozen chicken cutlets and Lawry's marinades (you want lemon pepper or Italian style tonight, baby?).  Tonight I found a substitute for hoisin sauce by smelling all the bottles in my fridge until I found the right one!  I've also (mostly) stopped trying to trick them by substituting eggplant hash for ground beef and accepted the fact that if it does not contain lots and lots of meat, it needs to contain lots and lots of cheese and/or be waffles.

So maybe we've just met in the middle and everyone is happy.  For now.

In other news, we finally found a great new babysitter, recommended by our wonderful nanny who moved out of town, and the kids LURVE her.  Hours before she was due to arrive on Sunday Wes said "If E doesn't come over I am going to have a hard time not crying."  What this means is that Ryan and I can LEAVE THE HOUSE AGAIN. TOGETHER. ALOOOOOOOONE.

Fifteen minutes before she was due to arrive I was inside finishing up the kids' dinner when I heard James screaming hysterically. He often screams hysterically for non-emergent situations, so I sighed, put down my wooden spoon, and calmly walked into the back yard to find James stuck fifteen feet up in a tree. Here's Ryan on a six foot ladder: 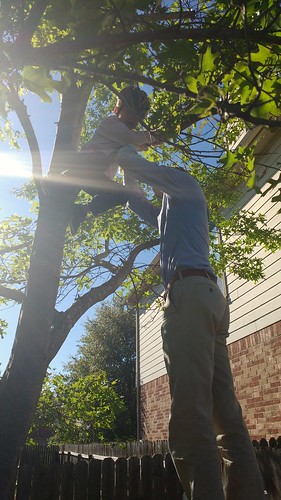 Ryan got him down, the sitter came, we peeled out of the driveway like the house was on fire and went to a beer-tasting dinner (and also Ryan stopped at Big Lots to buy some cheap laundry detergent). All this to say: the first day back from spring break AND our family's first day of DST was the morning after a *beer tasting dinner*. It was a rough start. I have got SO MANY THINGS to catch up on.
Posted by Becca at 10:43 AM