I am supposed to be trying to learn Python right now, but I only have forty-five minutes before I have to leave for a meeting and I don't really do well with small chunks of time, so I thought posting here would be a better use of time than continuing to read Downton Abbey recaps (SO GOOD).

This weekend we went to Explore UT for the fourth year (I think). It just keeps getting better and more fun as the kids get older. We took a picnic and hung out in the engineering courtyard where they have five or six fun kid activities all in close proximity so everyone can relax. Most of the pictures are on Ryan's real camera, so I'll give you the ones I took with my phone while he took multiple trips to the bathroom with various kids.

I really think my favorite part of Explore UT is watching big grad students be adorable with my kids. Seriously. While this was going on, Mary was building with blocks with a couple of women and Charley had captured the attention of a couple of civil engineering PhD candidates. 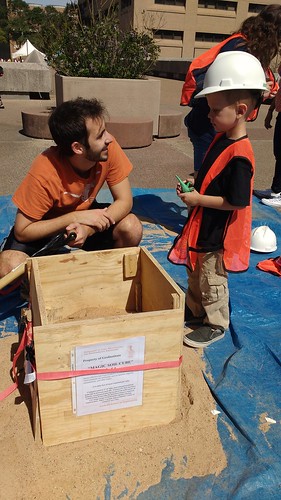 The kids obediently waited in birth-order to try the remote control robot. 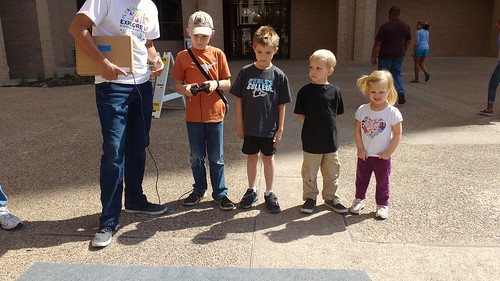 We went up on the roof to look through the telescopes. 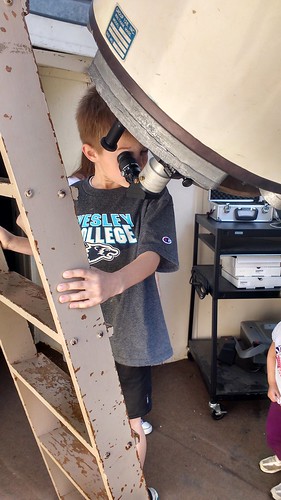 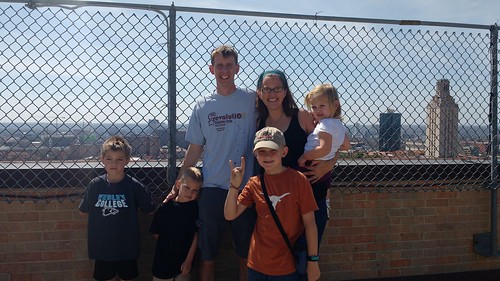 Then we spent some time in the super crowded chemistry building so Charley could go talk to the Marine Science people. When I asked about UT's offerings to undergraduates the kid gave me a lengthy rundown of all the awesome field projects *I* would have if I chose to study marine science at UT. I was almost ready to sign up! Sadly, I had to tell them that I was asking for my nine year old, but thanks for pretending I look like a college student for a few minutes! Good news is Charley could have a future like fifteen miles from our house! 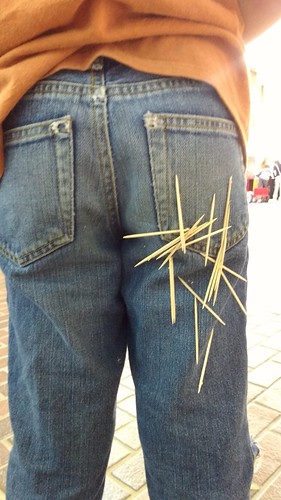 And then we went down to the stadium for band practice, like we do every year. This year we stopped on the way to have a loud public fight with Wes, who had had enough of the middle child routine and really really wanted to go through the firefighters' demonstration on what to do when your house is on fire thing that had a huge line. Poor Wes.

Mary was so excited to see that Elsa was there. And so was Charley. 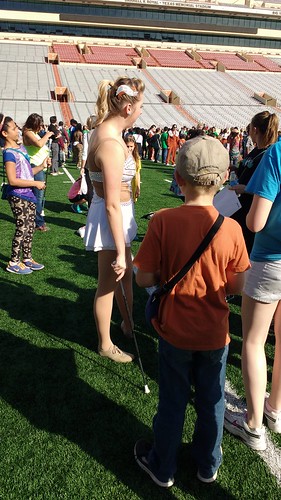 Mary and James learned to march. 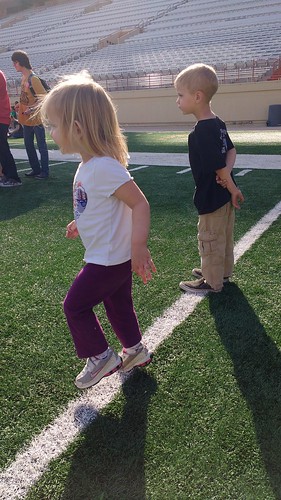 It was really fun and also completely exhausting (thought FB memories reminds me that last year we attempted Explore UT after attending a soccer game for Wes and a pancake breakfast to support the high school band, which was kind of insane) and we were all really happy to finally be back to our car. We stopped at a new place I now love for well-deserved pizza and beer and then went home. On the way Wes said "MAN! I can't wait to be home and get under my cozy quilt!" and then fell asleep for the night in the car before 6:30. MISSION ACCOMPLISHED. Everyone else was down and Ryan and I fell asleep watching Sliver Linings Playbook at 8:30. College is hard, you guys.

Sunday was our 12th wedding anniversary. We celebrated by Ryan saying "Happy Anniversary!" as he got up to take a shower and head to choir. Later I learned that Mary had taken off her diaper and gotten poop all over her room. And then Charley and Wes screamed at each other all the way to church. I was in a FOUL MOOD by the time we got to Sunday School and started crying halfway through our discussion on children's faith formation. (Note: We originally had family plans Sunday and decided to celebrate our anniversary last weekend with our bike ride and fancy ice cream family date, which was exactly what I wanted. We also celebrated by buying tickets to a brewery's tasting dinner in two weeks that I am REALLY excited about. Just so you don't think we celebrated our anniversary by picking up poop and going to church.)

We came home for leftovers and then I took Wes out for "alone time" where he gets to choose cookies from the cookie buffet at Whole Foods and we sit on the upstairs balcony and watch the cranes (construction cranes, not bird cranes) while Mary napped and the other kids watched a movie (because DAMN). When I got home, it was gorgeous out, the whole neighborhood was playing outside, and I was feeling much better. Ryan made a wonderful dinner and then surprised me with a sweet card and a CD I've been wanting and some of my favorite cookies to eat while we watched Downton. The little kids went to bed and Charley and Wes (cheerfully and efficiently! Crazy!) did their homework and practiced piano before heading up before Downton. It was a sweet, special evening and just perfect.

Our life and family are so happy and fun and we are in kind of a "just right" place right now. Twelve years ago we were both still in grad school living in a wonderful but tiny rent house we named "the Alamo" because of its orange stucco walls. In another twelve years we will have a college senior and sophomore and two high school students! Trippy!!
Posted by Becca at 7:59 AM

Oh my. I just did the math to see what I'd have in 12 years. Eli will be the same age I was when I was planning my wedding. The days are long but the years are short...
Side note: Totally stealing your alone time idea. What a great way to get a few minutes of quality time in!