Home sick today you guys. I've had this weird sore throat thing kind of simmering in the background all week, but it's been manageable thanks in part to leftover ibuprofen horse pills from my gallbladder surgery and in part to denial, denial, denial, and yesterday, the bacon-pear panini from Kerbey Lane that I bought after my "workout" (15 mins on the elliptical, after which I thought I was going to perish) at nine o'clock in the morning. But then this morning I woke up and my throat was like "NOPE" and I remembered the day I taught through having no voice last semester and figured I have earned at least one sick day for something minor, like a forest fire in my throat.

Also I have TAs who are more than capable of handling my lab this afternoon. TAs!! I feel like a grownup.

Anyway, it's good that I am here because after I sent the necessary emails I laid my head down just for a minute and woke up two and a half hours later.

And then I managed a trip to the store for dinner stuff and boxed Valentines because enduring forced Valentine signing misery X4 seems like good karmic payback for staying home sick.

What else? Oh, last week on Wednesday Mary had a sick day so she could go get some shots and a well check. I was going to take her to school after, but then she didn't want to eat the giant cinnamon roll I got her after the appointment and I suspected she was feeling funky, so I took her home where we watched Frozen and then she took a three and a half hour nap (IT'S A THEME!). 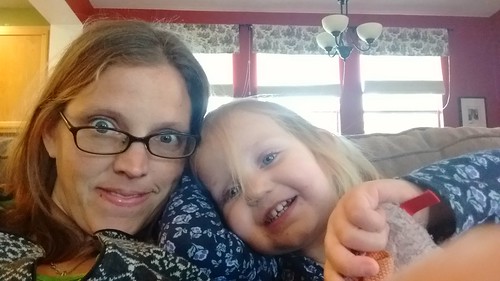 Later we got the other kids and then she played stay at home mom in the culdesac. 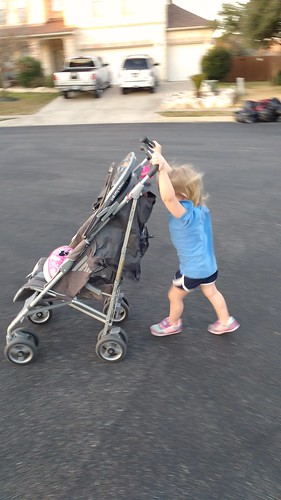 And last Thursday, after a very fighty Wednesday dinner, we were headed home after school and they started up again and I abruptly whipped the car into Freddie's and bought everyone a hamburger. I was NOT up for another screamy afternoon, or for making spaghetti and meatballs (their favorite, my least favorite meal), and it just seemed like the thing to do. Once they saw me headed for the drive thru they perked right up and we had a really fun day after that. SOMETIMES YOU JUST NEED TRANSFATS END OF STORY. 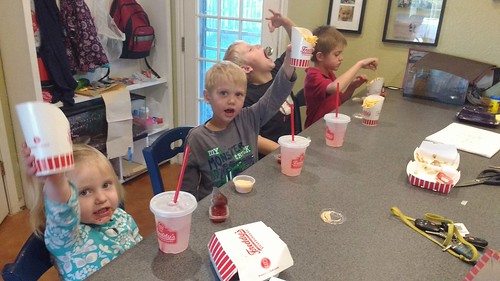 I've been super busy at work over-committing myself like I do. I volunteered this paper I am working on to be the first one our writing group evaluates, but that means it has to be done in two weeks, which is LAUGHABLE considering I've been procrastinating on it since September. In addition to that I'm learning everything I can about air pollution in preparation for this research collaboration that might hopefully, possibly work out that would be a really good thing for me, more on that if it ever does materialize. In the mean time, I have learned a TON. It's interesting stuff. And then, you know, there's my class and all that.

And last weekend was hectic, to say the least, with an all day women's conference on Saturday at my church followed by the chili cookoff (Ryan had the kids all day, then took Charley and Wes to a school dance, then went to the chili cookoff), then Sunday was church-Scouts-Superbowl Party and in another life I could have written a side-splitting thousand words about the EPIC THROWDOWN that happened when we tried to leave the Superbowl Party and Charley DIDN'T WANT TO GO HOME (and the NOTE he left us, OMG!! He used the word "sabatough"! It's my new favorite!).

So anyway! Busy but good, right? More posting, hopefully, right? And the Advil's kicking in so I am going to go deal with the Kitchen Situation.
Posted by Becca at 10:27 AM

I've been a long time reader and have never commented, but I finally had to comment and say that you make having 4 kids (and a job and a husband) look, not exactly easy, but graceful - and I clearly need to step it up some. There are some days with my two that I wonder exactly what I was thinking (I am a SAHM). Great blog - I always feel disappointed when there's not a new post up. Thanks for the laughs.