As I mentioned in closing last time, the upstairs of my house (Charley and Wes's room in particular) is a total disaster, even on the best of days when I finally let go of my need to force the kids to do things for themselves and dove in with a glad bag and gas mask, it didn't ever really get that clean. I think it was because there were two hoarders boys crammed into the tiniest bedroom we have. It didn't even start out as a bedroom, but once we found out James was on the way Ryan converted the upstairs family room slash crap dumping ground into a fourth bedroom and a linen closet that opens onto the hallway. This is a great arrangement and it's not THAT small, just too small for Charley and Wes and their Collections (of trash, mostly).

So Friday Ryan brought home another Ikea bunk bed to put in the other room (fully assembling ANOTHER Ikea bunk bed rather than taking apart and moving the original one seemed like the best use of time and resources, considering future needs (SLEEPOVERS NOT MORE CHILDREN) and current furniture arrangements). He didn't want the project to consume all of Saturday (because he had some yard work he was really looking forward to) so he proposed we crack open a six pack and assemble that puppy at NIGHT. Which is what we did and I thought it would make a better blog post, but honestly I've put together one of those beds before and it was kind of a nonevent. Except that we spent our Friday night assembling a bunk bed. 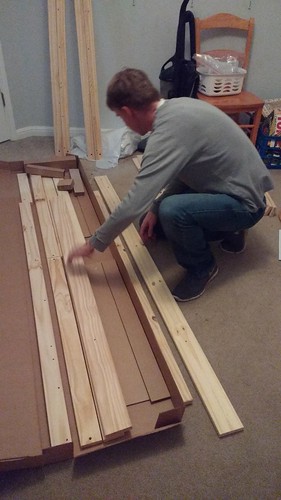 The pile of nondescript looking boards is a bit intimidating at first, I must admit.

The next day we dove into the Moving All The Crap stage of the project. And lest you think I'm exaggerating the state of Charley and Wes's room or being overly self-deprecating in a coy "sorry about the mess" kind of way, I present you with Exhibit A. 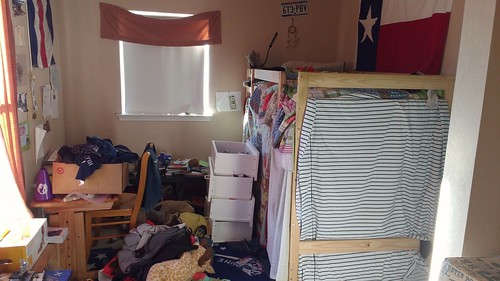 It was *slightly* messier than normal when I took the picture because Ryan had already taken the drawers out of their dresser and moved some piles of clothes, but YOU GUYS LOOK AT THAT SHITHOLE. It is making ME twitchy right now.

Four hours, four garbage bags, and a trunkload of donations for the Children's Home later, we had successfully moved Charley and Wes into James's (larger) room and James into Charley and Wes's room. And gotten rid of TONS OF JUNK. We KEPT Charley's bottle cap collection, which is measured in cubic feet at this point, after a couple of years of having college student nannies and Wes's rock collection (approximately two hundred pounds of mostly hunks of limestone he found on the playground). We kept their books and their "wall of art" and their baseball pictures. We left behind A LOAD OF SHREDDED PAPER THAT COULD HAVE PAPERED THE FLOOR LIKE A GIANT HAMSTER CAGE. We gathered Legos from all over the entire damn house and put them in one huge bin in the corner of their new room.

My favorite part is that we used an old dresser to store their uniforms and they filled up ALL FOUR DRAWERS. In their old room both pants and shirts were crammed into a single cube in their Ikea bookshelf cube thing, which was what started this whole thing Friday morning. It was IMPOSSIBLE to find uniform pieces quickly. Now we know that Charley has ten pairs of uniform pants and three uniform shirts! THIS IS A PROBLEM!

Not a problem? The MILES OF SPACE AND STORAGE they now have for all of their items.

Here is Charley and Wes's room: 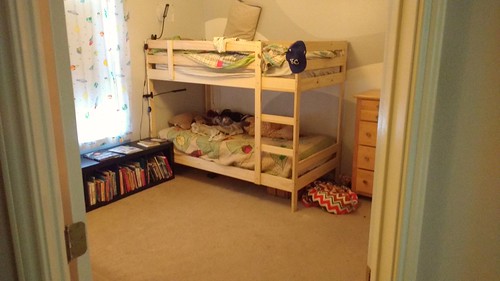 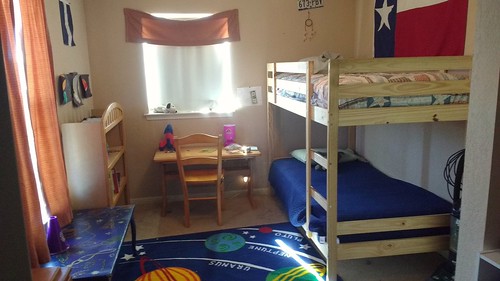 Everyone is LOVING it so far. Charley spends time sitting at his desk reading and working on homework. James gets to sleep on the TOP BUNK.

And now begins the next six months of retraining Charley and Wes to THROW AWAY TRASH AND PUT CLOTHES AWAY OMG.

After all that work we went to Sonic, obviously. And also, I feel like I've been hit by a truck. So much bending and lifting! #thisisthirtyfive
Posted by Becca at 6:09 PM

SO Pretty! I love organized kid shit and I get a little "No Wire Hangers!" if I actually put in the effort to make it pretty. But it's worth it, if you ask me, for a non-twitchy mom.
Also, Ugh on the bottle cap (Eli) and rock collections (Syd). Neither will accept an addition unless they pry it out of the ground. So gross.