My year is finally starting!

Holy cow, you guys. Here's how my semester began: I was out of town for four days at a conference in New Orleans (which I didn't write about here because when I wasn't being all professional and stuff I was doing New Orleans things, which means, I guess, drinking lots of free wine at the Embassy Suites happy hour and eating AMAZING food. AMAZING FOOD.), and then I came back at eight o'clock the night before my first class (actually the second class meeting of the semester, with the first being while I was away), so I hacked my way through *that*, then attended to a million little details and meetings on Friday, had a three-day weekend with the kids, and then was back at school Tuesday with a ten o'clock class and no plan. That was rough. The good news is that (in addition to some other, more flexible, things) I have ALL DAY TODAY to plan tomorrow's class. That sounds positively luxurious.

So while I am doing that, enjoy these pictures!

I was at the conference to give a talk in the educational symposium on the new way I structured my lab class last semester. It was very well-received (even though: teaching about teaching, very meta!)! The educational symposium was really very good this time around. So glad I went. I also got some good ideas for another project I am working on, that I call "The Neverending Slog of Doom," so that should help. And also, I only took a few pictures at the conference. Mostly on the last day when I was getting really punchy and restless, as these things go. 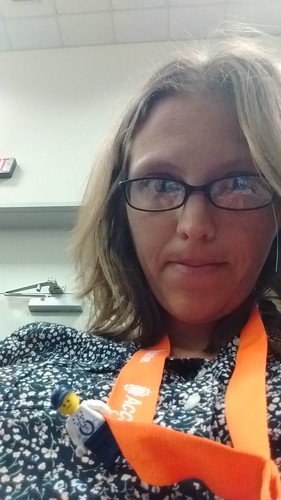 I got a free Lego minifigure in the exhibit hall and just like a preschooler, used it to amuse myself during the last session I attended, which was about energy infrastructure and climate change. 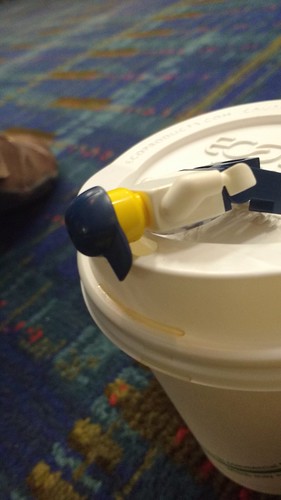 Fortunately after that I had lunch plans with my friend Teresa, who I roomed with for the week. We had some good times. For lunch, we tried to find a sushi place, but the one that was close by was closed, so we ended up at this ridiculous place called Root that had things on the menu like "Buttermilk gel foam" and a bunch of words I've never heard of, except "charcuterie" which we both found hilarious and made a point to insert into the conversation as many times as possible. 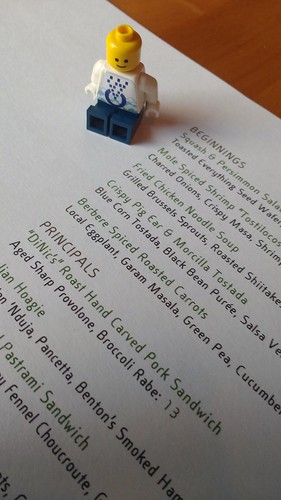 We didn't go for the whole charcuterie and instead opted for an individual selection of cheese, at the waiters's recommendation, some kind of aged white cheddar that was encrusted with barley hulls and soaked in whiskey. It was NOT BAD. And it came surrounded by a bunch of mysterious pickled fruits that were also delicious and some persimmon chutney for dipping. PERSIMMON CHUTNEY. 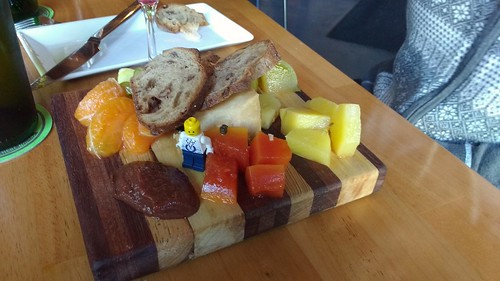 We followed that up with some amazing sandwiches, some more wine, and dessert, which included chocolate mousse, cake, gelato, pound cake with sweet curry sauce, and other things that would have horrified the children. One of my favorite meals ever. They basically rolled me into a cab like Violet Beauregarde on Willy Wonka and the Chocolate Factory so I could get to the airport.

In other news, Ryan finally found the source of all the mysterious candy wrappers we've been finding in the big kids' room! A pillowcase full of Halloween candy! He brought it downstairs and we ate everything that was worth eating then tossed the rest. There have been eighty percent fewer unexplained upstairs procrastinations since it was removed! All in a day's work. 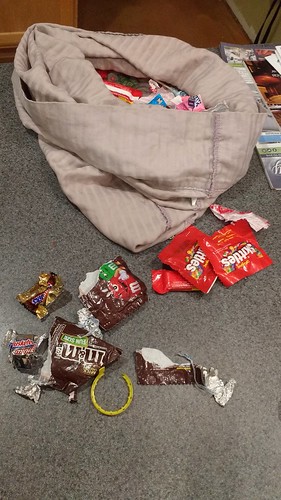 Now that James can ride a two-wheeler it is pretty much impossible to keep the kids inside in the afternoons. Yesterday we didn't get home until quarter to five and I NEEDED to make dinner to accommodate a 6:45 Cub Scout meeting, so while the boys rode around outside I had to make Mary ride inside. She was NOT HAPPY. But HEY! Concrete floors that make this kind of possible are kind of awesome! 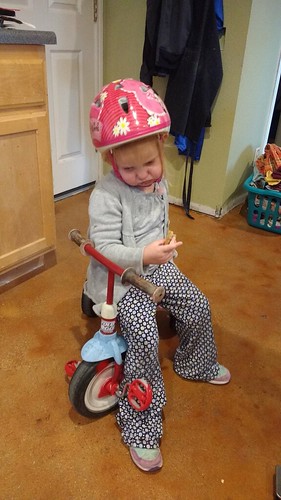 And finally, yesterday morning I reminded the kids that we don't watch TV before school and that if they had extra time they could read or draw and I walked into the living room a few minutes later to find THIS cozy scene: 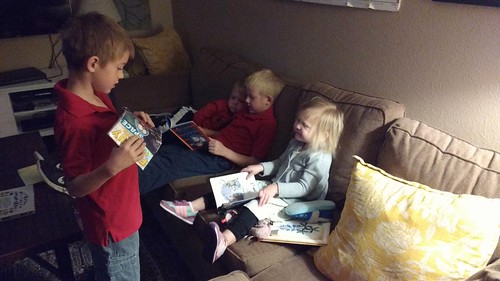 Which I took a picture of so that I could look at it when they are all trying to kill each other, which they did over dinner later that same day.
Posted by Becca at 7:06 AM