Wow, you guys. We have NEVER had such a fun and busy Christmas Break. I think it's because this is the first time Ryan took a big chunk of time off. This allowed us to do some fun outings and road trips instead of our usual Christmas break routine of endless screen time punctuated by brief bouts of cookie-making and forced church revelry. So GET COMFY and enjoy this two-thousand word travelogue of Academomias Do Christmas 2015.

We started the break with some ice skating on the roof of the fancy grocery store downtown. It seems like we do this every year, but this is the first time it was SEVENTY-FIVE DEGREES outside. That was a welcome change from the last time I remember doing it, when by the time we were done I couldn't feel my feet, which is undoubtedly a more authentic experience. Not many pictures because I was busy supervising three kids ON ICE while also trying not to kill myself, but we had a really great time. Charley got frustrated the first time he went out and it was really hard on him (we had to lift him over the wall because he was so distraught he couldn't work his way over to the door), but then he talked to my mom for a while, changed into a bigger pair of skates, and then gave it another try. He was ALL SMILES after his first successful lap. That kid has my heart. Here is Wes: 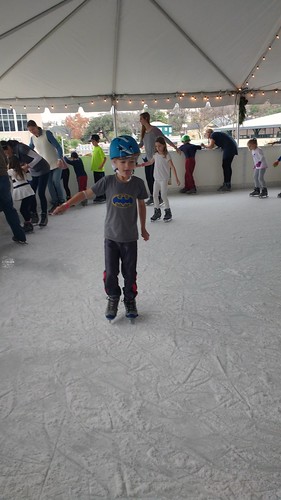 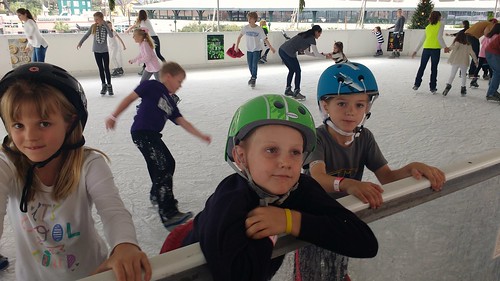 The next day a friend invited us fishing at a pond near our house. I was delighted to spend time with this relatively new friend but it turned into kind of a disaster when Charley couldn't get his reel to work the way he wanted and Wes refused to fish because his rod was not exactly right either and I spent a lot of time trying to act casual and enjoy the adult conversation while trying not sweat through my clothes or shout obscenities across the pond after a kid threw a fishing pole in anger. *I* had a good time. Not sure about Charley and Wes. 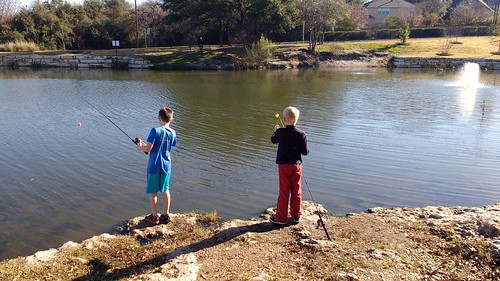 The first morning of actual Christmas Break, when Ryan and the little kids were home, we scheduled a group dentist appointment! Get excited!! The really exciting thing happened after the appointment when we took them to lunch and surprised them with a visit from Miss N, who was visiting her family for the holidays. It was a loud, excited, huggy, happy reunion in the parking lot of the restaurant. Afterward she stayed with us all day (lots of playing outside and running around, just like old times) and then spent the night in Mary's room (Mary slept with James. The all night kid-rave finally got old around nine o'clock when the raucous giggling turned to screaming and they both bodyslammed the gate down. Then we had to pause National Lampoons Christmas Vacation and actually go up there to separate them. Eventually they went to sleep. Eventually).

The weather on Christmas Even was weirdly gorgeous so we spent another whole day outside, first having breakfast tacos with our neighbors and then transitioning right into cinnamon roll making, bike riding, football throwing, and whatnot. We cranked the music up and opened a bottle of wine and honestly it was perfect. Also, our neighbors had some kids Charley and Wes's age visiting from out of town and then EVERYONE HAD A PLAYMATE. It was super fun. 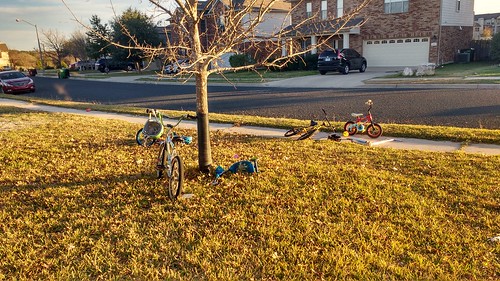 This weather was ridiculous, even for Texas.

I wore my tasteful seasonal vest, which perhaps is becoming less ironic as I age and spend more time baking and fussing over smudges on the kids cheeks. 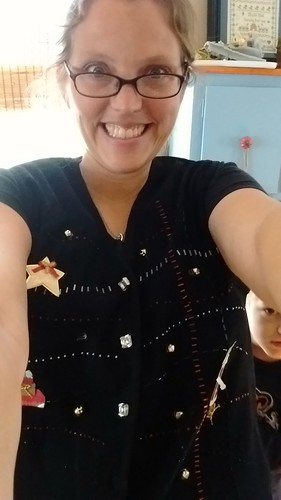 Ryan and I made eight (8!!) pans of cinnamon rolls. 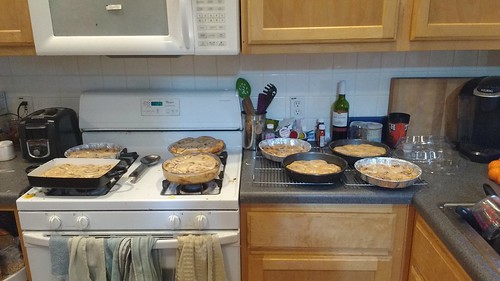 And a little bit after they were done it was time to get everyone into church clothes. I only took a picture of Mary at the house because everyone else was in NO MOOD (I totally scored her lined wool skirt for A DOLLAR at a kids' consignment store after she had a potty accident on the way to a holiday party a few weeks ago). 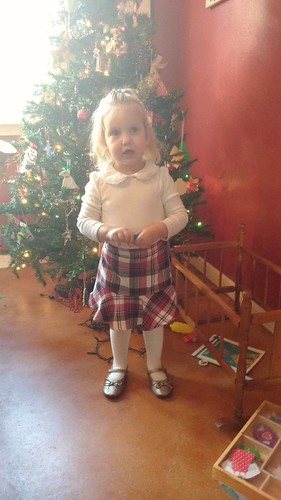 They perked up when they got to ride in the Shalom Shuttle from the parking lot to the building. 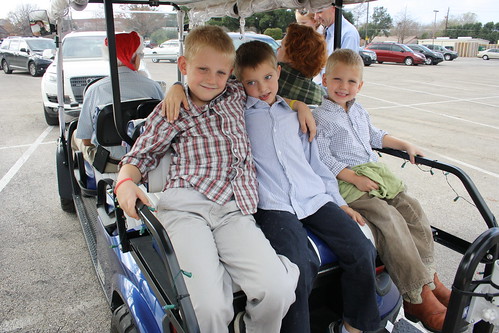 Miss N came with us to church, which was a special treat for us. Charley played "Angels We have Heard On High" for the prelude and did a great job. The kids once again got to choose to be shepherds or angels or wisemen and participate in the huge Christmas pageant all the kids do every year. 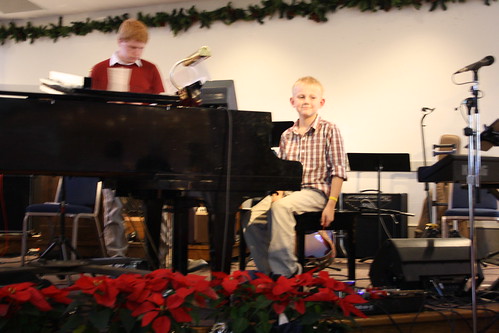 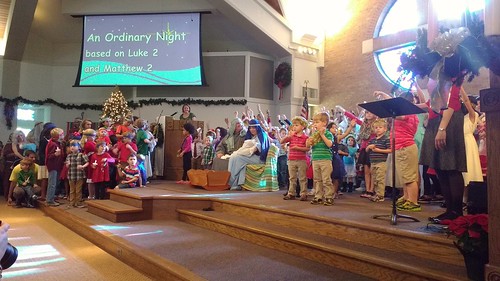 They lit candles for Silent Night with no incident. 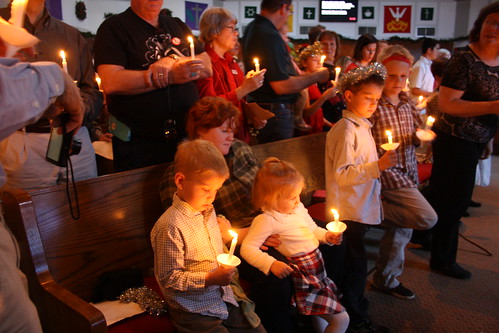 Afterward it was so amazing outside we went to our favorite hamburger place to get a beer and play on the playground. 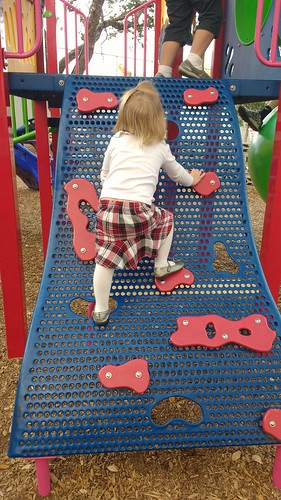 And then we ran home to quickly finalize preparations for Santa's visit, which the kids were SUPER SERIOUS AND ADORABLE about this year. We went to bed at a reasonable hour and awakened before dawn to the sound of a kid shaking his stocking out on the floor in the hallway and exclaiming to a brother "CANDY AND HOT WHEELS AND OH!! STAR WARS BANDAIDS!!!!!!!.

Chaos ensued, much of it with kids in their underwear (can't sleep in coordinating flannel PJs when the overnight low is SIXTY FIVE DEGREES), so not many pictures, but it was a good morning. 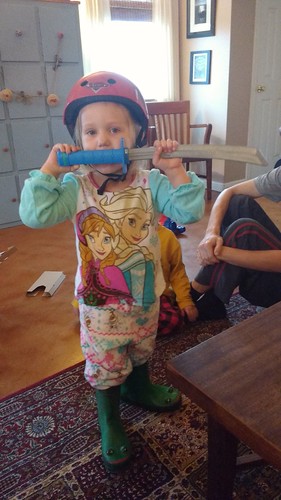 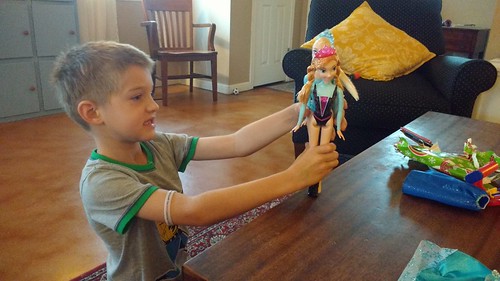 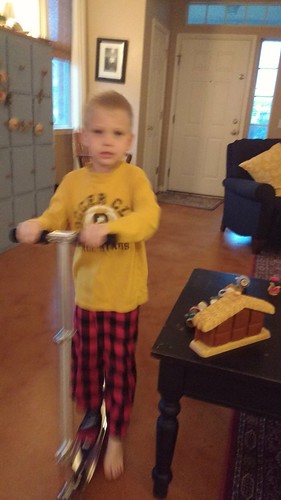 Around eight James and I went outside to play with the neighbor kids and show off his new Razor scooter and also deliver two pans of cinnamon rolls, but other than that we played all day until my parents came for lunch and more presents and more FOOD and CHAMPAGNE OBVIOUSLY.

Christmas dinner was at my aunt and uncle's house. Warm and fun and delicious as always. 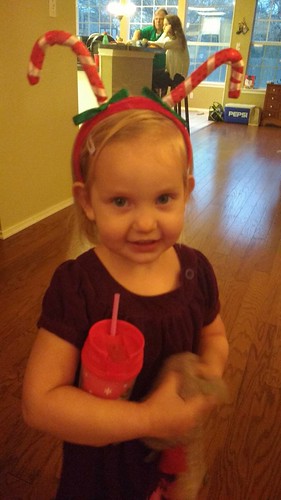 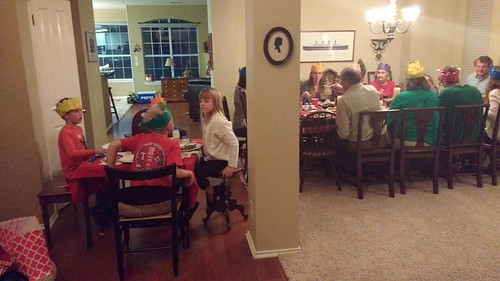 Miss N came over the next day to spend even more time with is (her visits were a major highlight of Christmas break for us all!). We played for a while then went to my aunt's house (different aunt) for the traditional Polish Christmas celebration of fish, soup, and pirogi (SO MANY DELICIOUS PIROGI). After the feast no one was hungry for dinner that night so we went back home and hung out while the kids bickered and ultimately went to bed early. MEMORIES! (Honestly though, not memories. There were some CRAZY KID FIGHTS this year, but I am having trouble remembering the details. I think there was biting. There was definitely pushing and screaming, but not all at once. And it wasn't continuous. Sometimes they took breaks to watch TV or have magical holiday funtime moments.) Sadly, Miss N went back to New York shortly after that. We miss her already.

The next day we got in the car and drove to Ryan's parents' house. We made it approximately forty-five miles before our SECOND pit stop (first was to get James out of the car for a time-out after an outrageous kicking and screaming tantrum over the fact that he was wearing pajama pants, which was only because he didn't comply with any of my FIFTY MILLION requests to put on normal pants before it was time to go). The second stop was because Lady Mary had to go potty. Fortunately we were at our favorite rest stop, the one with the tornado shelter and informative exhibit of terrifying tornado images including a video entitled "Central Texas Weather: from Delightful to Deadly" that we all enjoyed. Also, did I mention that winter finally showed up that day and it was really freaking freezing? It was really freaking freezing. An hour after the tornado rest stop it was time to stop again for koloches, which turned out to be our lunch (which was FINE WITH ME, I'll take two of the cream cheese and one of the ham and cheddar, thankyouverymuch). 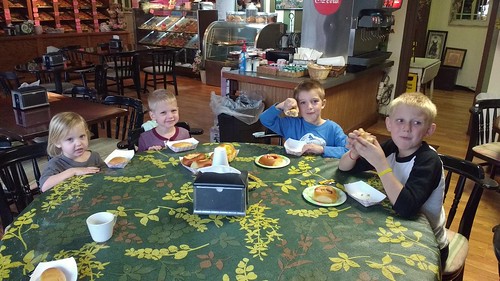 We made it to Ryan's parents' and had a great afternoon of playing and catching up followed by a nice dinner with his sister and BIL and our nephews. The kids were in bed by eight and then Ryan and I went to see old friends of ours that live in the area. We talked for a couple of hours about SO MANY AWESOME AND NERDY THINGS. Too numerous to count here. But someone said something about the Paleocene Eocene Thermal Maximum and someone else talked about proxies and indigenous peoples and early effects of agriculture on ecosystems and the atmosphere and THIS IS WHAT HAPPENS WHEN YOU PUT A COMBINED TWO DECADES OF GRADUATE SCHOOL INTO ONE ROOM WITH A BOTTLE OF SPIKED EGG NOG.

The next morning we went to the awesome children's museum there. We spent five hours, but could have spent days exploring. We did our own cell cultures (from cheek cells), we precipitated plant DNA from wheat germ using a many-step process that the kids got to do all on their own, we saw a cool exhibit on phosphorescence, Mary got to play in the toddler area for a couple of hours, during which she kept returning again and again to the hand dryer next to the water station, Charley and I built a structure out of KNex and tested it to failure with a simulated earthquake. GOOD STUFF. 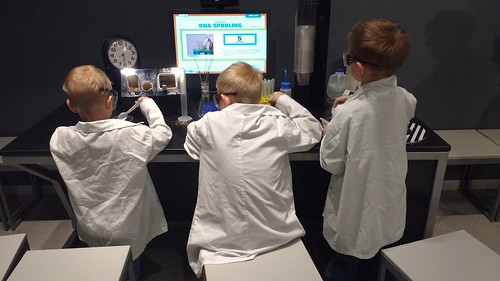 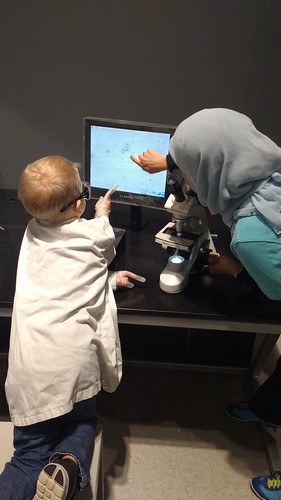 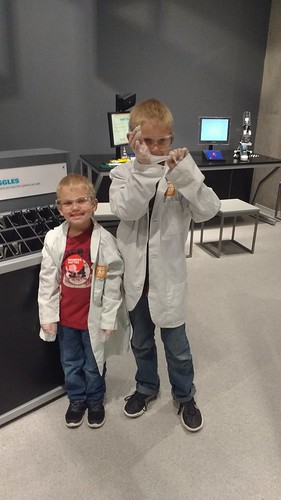 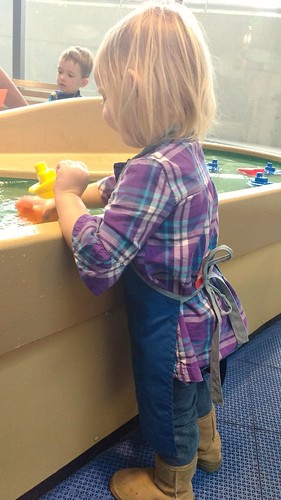 The kids were completely exhausted after the museum but managed to watch a movie before dinner. We tucked them in early again and had the whole night ahead of us, but chose to go back to the hotel to watch HGTV in lieu of seeing Star Wars because both of us were pretty sure we wouldn't be able to stay up past nine thirty (spoiler alert: we were right).

The next day we headed back home with a sick kid and a stop at Buckey's. 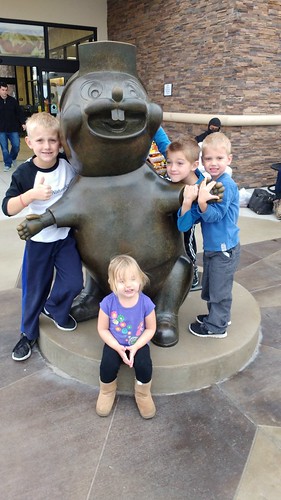 And have been officially lazing around enjoying the last of the break before we have to face the real world (rolling start: tomorrow Ryan and the little kids go back, Wednesday the big kids and I go back). We had a lot of fun, but also we had a LOT A LOT A LOT OF FIGHTING. It got so bad on Friday that I took away TV all weekend, which ended up being a good thing because Wes made coffee in bed for Ryan and me and Charley started studying sea-life taxonomies in a marine biology book my parents gave him for Christmas. Also we routinely slept until almost eight, which is going to be a REALLY HARD HABIT TO BREAK, but NO TIME LIKE THE PRESENT. Tomorrow we are back at it.
Posted by Becca at 8:30 PM