A Prelude to the Weekend of Cake

Somehow, it is Friday. AGAIN. Which is so weird because I thought it was JUST Friday. Fortunately I don't have plans to assemble an Ikea bunk bed tonight, but instead have plans to meet up with friends for an afternoon of playground frivolity and hamburgers (and yes, OK, beer too). And tomorrow we have THREE BIRTHDAY PARTIES to attend. And not just the kind of birthday parties where you kinda sorta recognize the birthday boy as the blond kid who sometimes sits next to your kid at circle time. REAL LIVE FRIEND PARTIES. One is at 9:30 and another is at 3:30, both in the same neighborhood pretty far away from our house, so we'll either be staying awkwardly long at the first party or having lunch out and spending a weird amount of time at Target before the next party.

And then we have another, grownup, 40th birthday party at a restaurant at 7:00 FOR WHICH WE HAVE A BABYSITTER.

All that to say I'll be having cake and alcohol with all three of my meals tomorrow. Getting closer and closer to those New Year's Resolutions!

This has been a busy week in the arena of "make twenty five freshman REALLY EARN their lab science credit." Tuesday and Thursday mornings they made catapults and wrote reflections about the design process, what worked, what didn't, what they would do again. And Thursday afternoon I hit them with a statics problem that they had to solve in Excel. My favorite kind of assignment is one that starts out with abject horror and ends with "Huh, OK. That was pretty useful" and I think I got pretty close to that with that one, but it was THURSDAY AFTERNOON and all. There's gonna be some grumbling.

Monday night Charley and Wes had a rehearsal for Children's Sabbath at our church immediately after their piano lesson, so we went out for dinner and then had frozen yogurt. I was aiming for close control of how much crap everyone put in their bowls because it was a school night and I didn't want anyone to hurl (this has happened before), so I was watching pretty closely. But then James HAD to go to the bathroom RIGHT NOW and wouldn't go by himself in spite of it being about ten feet away from where I was standing, so I had to take him over there. And when I got back, it was TOPPING EXPLOSION. 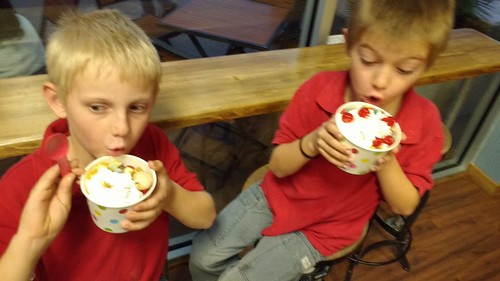 Wes is having trouble finishing assignments both at home and at school right now so when we were doing homework last night and he had to write two sentences about a book he read, I let him do five jumping jacks for every word he wrote, and YOU GUYS he finished NOT ONLY THAT ASSIGNMENT, BUT A SECOND DAY'S WORK AS WELL! I wonder if his teacher would let him do that. 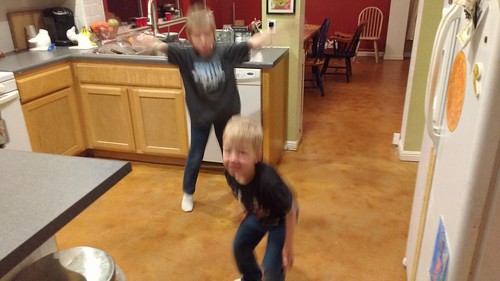 I will leave you with this picture of Mary wielding a six-foot long stick from last night that I like to call "I have three brothers and I WILL MESS YOU UP." 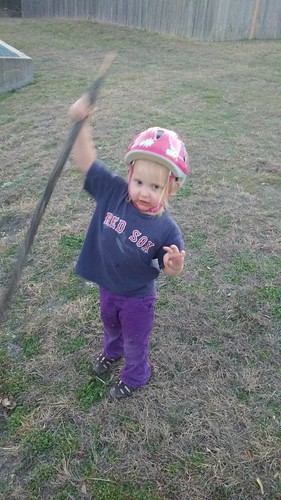