My family, doing the things my family does.

We had a really fun weekend with Ryan's parents, who came down to take us all on the Santa train, an old steam train that takes you out in the country and back while providing hot chocolate, cookies, story time, and Santa.  It was SO FUN.  James keeps telling people we had to take a really long train ride to see Santa and when we got back to the same station we'd left and walked through a different door he was convinced we were in a new town.  I love him so much.

After the train ride and lunch we had a bunch of James's buddies over for bike fun and cupcakes for his fifth birthday.  Everyone brought their bikes and we completely took over our little street for a couple of hours of mass chaos.  James was thrilled to see his buddies and the big kids were thrilled that they all brought their older brothers.  (Note: this party was slapped together at the absolute last minute because James was super sad that he wasn't "having a party" on Friday morning over breakfast.  The last-minute cupcake and outside-play party is RAPIDLY becoming my favorite kind of party because it is both EASY and FUN and did I mention EASY?  The kids love it.  Win win win.  Win.  Win.)

That party seamlessly transitioned into James's birthday dinner, which we had a day early and also combined with our final fancy Advent Sunday Dinner dinner (also a day early). My parents came over and Ryan's parents were there and we had a FEAST of BBQ chicken, hot dogs, cilantro lime rice, challah, baked sweet potatoes, and salad plus wine and Italian soda all spread out on an overflowing table crowded with people, just the way I like it.

This morning James turned FIVE and we had our traditional cupcake breakfast. I asked him to hold up five fingers and this is what I got. The other kids gave him a fishing pole and then spent so much time showing him how it works that we had to skip Sunday School and go straight to big church an hour later. I honestly can't believe he is five and starting kindergarten next year. HE STILL HAS A BABY HEAD! Even Charley has noticed this--he said to me the other day about James "He looks so cute with his little round head sticking out of his sweater!" CAN HE GO TO KINDERGARTEN WITH A LITTLE ROUND HEAD? But seriously. He is adorable. The other day I had him and Mary at the store and he was being so loveable I said to him "Did you take cute pills this morning? Because I think you're even cuter than normal" and he got really shy and serious and wanted to know what cute pills are, where you get them, why you take them. I finally convinced him that I was kidding about the cute pills, but he just laughed nervously and wrapped his limbs around my leg. 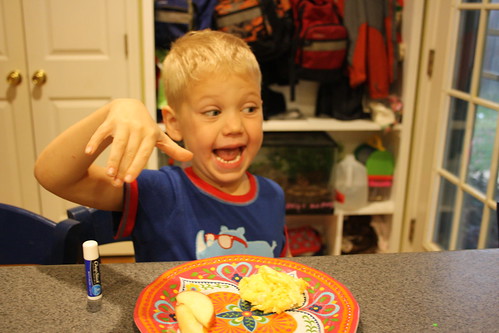 And now for a series of special, special moments I want to remember forever:

Today we had brunch with Ryan's parents at a nice restaurant.  Ryan and I were talking about making Yorkshire pudding.  I said to him "I'll have to ask the butcher for a roast beef that has a lot of fat on it" because the usual offerings at our grocery store don't yield enough juices for Yorkshire pudding.  Charley piped up loudly, "If you go to the butcher, can you get me a sheep bone?"  Without missing a beat, I responded "Oh that's right, you wanted to use it to make a weapon."  Ryan and his parents looked concerned but unsurprised.

Tonight we went to a party at my aunt and uncle's house.  It was a Christmas sing-a-long, complete with a fancy buffet meal, eggnog punch, and lots of good old fashioned benign neglect of the children, who were doing who knows what upstairs.  The singing part lasted about an hour, during which Ryan and Mary and I sat back and enjoyed ourselves with nary a care in the world.  When I got up to refill my drink I noticed James talking to someone in an adjacent room.  Later that man came over just bursting to tell me that James had said "I told Santa I want a knife to kill bad animals for Christmas."

After the singing ended, Ryan and I were getting ready to go when suddenly, Mary disappeared.  We were frantically running around the first floor looking for her, on the front porch, on the back porch, in the kitchen, out in the back yard, upstairs.  Finally I was coming back inside when someone yelled "She's in the bathroom!" and I walked into the master bedroom to find Mary walking out of the bathroom with her tights around her ankles and skirt in hand, proudly announcing "I GO POTTY.  PEE PEE.  I GO POTTY-PEE PEE. Terrifying. Also, yay?

Shortly after Charley asked me for a sheep bone to make a weapon with, Wes proudly ordered "pancakes and fries" from the waitress.  When the food came he poured syrup all over everything.  I asked him how ketchup and syrup mixed together tasted on fries he beamed at me proudly and encouraged "try it!!"  It wasn't bad! 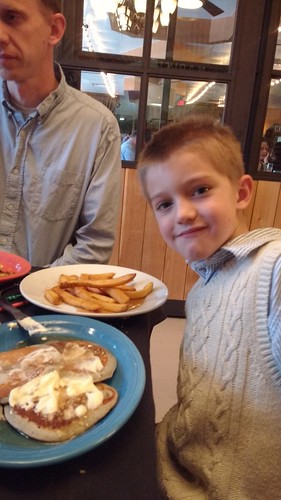 Tonight at the sing-a-long two of the kids there played Christmas carols for everyone to sing. Charley played "Angels We Have Heard on High". I'll let you watch the video (like I have approximately six-thousand times). It is amazing to me to watch them do Hard Things with grace and confidence. Playing the piano for a packed room of unfamiliar adults? Not something I could do. Charley? No problem. I love his little smile at the end. And the way he stuck with it when he had a bit of trouble in the second verse (not to keep making comparisons to myself, but there would have been tears and awkward running from the room). 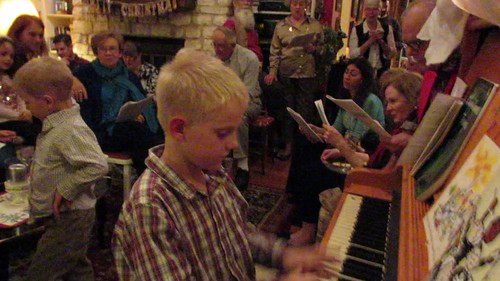 Totally makes up for him accidentally knocking a Santa figurine off the second floor landing onto the first floor where it landed in and broke someone's coffee cup. Win some/lose some. But seriously, it was a really, really fun weekend.
Posted by Becca at 9:24 PM

Way to go, Charlie - that was great, I'm so impressed! Your family has some fun traditions. Merry Christmas!

Children are the best creation of God. They learn a lot of things from the family. So the parents should take care of them most to grow up with good behavior. Education plays critical role every child. So giving a good education is the responsibility of parents. The admission essay writing service helps you to get admission to best school.