After Monday's hellish day of terrible behavior that evaporated the moment Ryan pulled into the neighborhood that evening, I decided that we were, under no circumstances, going to repeat that situation ever, EVER again. So Tuesday morning I declared that we were going to GO ON A HIKE. Not just any hike, we decided to tackle the Hill of Life. A huge, long hill trail that ends at a beautiful waterfall. I reasoned that if they were physically exhausted, it would make it harder for them to hit each other. 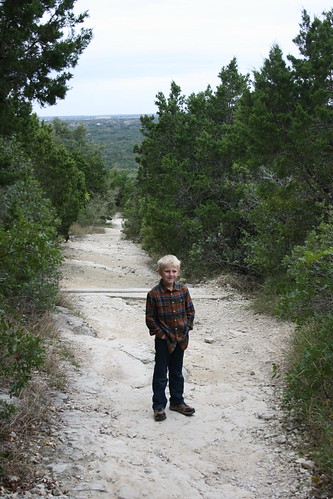 On the descent. The good thing about this trail is that you start at the TOP and go DOWN, which means that if you ever want to see your car again, you have no choice but to go back up.

Wes had a bit of a meltdown near the bottom because they couldn't decide who was going to be "the line leader", but we ignored him and eventually he rallied and we all enjoyed throwing sticks and rocks into this stream for a while. 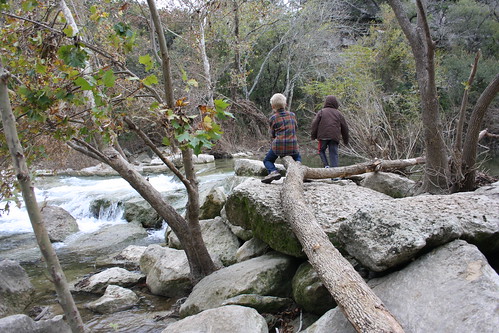 Going back up the hill was no problem--Charley and Wes SANG part of the way up. In fact, what I wasn't expecting was that the real endurance event would be finding a parking place at the downtown restaurant the kids chose for lunch while all of us were starving. I nearly despaired of having a basket of yummy waffle fries with horseradish sauce and took us all to Whataburger, but finally found a semi-legal parking spot a block away. The kids were awesome, by the way, but I was on the verge of a major freakout. We all felt better after some lunch. Then we went home and had a movie nap until the little kids were done napping and we could pick them up.

After our success on Tuesday we decided to go to an interactive art exhibit on Wednesday morning and lucked out by getting there early enough to be pretty close to the front of the line. We even found an amazing parking spot that was FREE right across the street (KARMA FROM TUESDAY). We had to wait about an hour for it to open, but the kids had a huge field to run in and lots of other kids to play with, so it was really quite nice.

And, friends, it was SO WORTH THE WAIT. 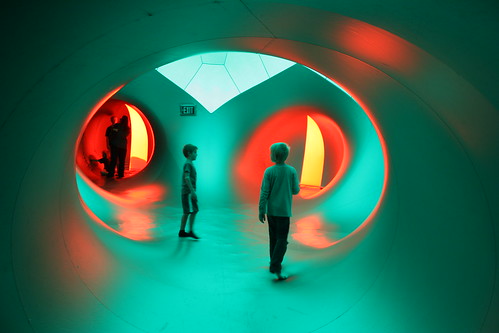 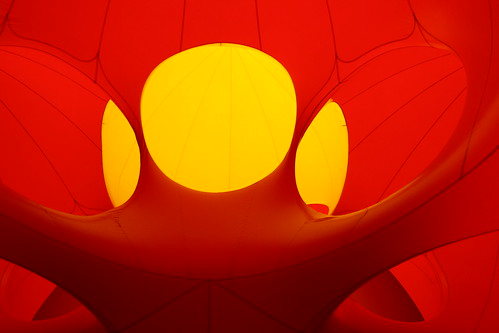 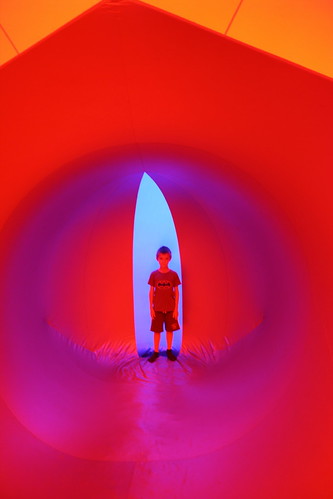 After that we had lunch and went to a park where we discovered, sadly, that our favorite canoe rental place was washed away in a flood last month. But we rallied and spent an hour throwing rocks into the water (it never gets old!) and then visited a watershed exhibit they have nearby, played on the playground, and went for a walk. Then we got in the massive holiday traffic to go back north to pick up the little kids and head home for the break. We played outside with neighbors for two hours in preparation for the four days of cold wet weather we had in the forecast. Then we went home for pizza and Charley Brown Thanksgiving.

Thursday was the family Thanksgiving at my parents' house, which was so, so fun as always. The kids played "So You Think You Can Dance" and "Pin the Pilgrim Hat on the Turkey" and also "How Many Izze's Can I Drink Before Someone Notices the Empties Piling Up in the Recycle Bin" and our other favorite game "Eat All the Pepperoni Off the Appetizer Platter". The meal was delicious and we went home with a bag of leftovers that we are still enjoying over here. Since we left at five and the weather was still warm, we decided to go for a walk before driving all the way home so someone didn't take a deadly thirty minute car nap that would completely destroy bedtime. We found a park near my parents' house that turned out not to be good for walking but it was GREAT for, you guessed it, THROWING ROCKS IN THE WATER. We did this for an hour even though an aggressive drizzle started to fall and it started getting dark. We love playing in nature in our Thanksgiving finery!!

We got home around 6:30, put Mary-No-Nap to bed, and all had two pieces of pie for dinner. Glorious.

Friday we planned to stay home all day and avoid the insanity, but found ourselves getting restless around 10:00. It was pouring, so we headed to the Y for Open Gym and played basketball and keep-away, and soccer for a long time until everyone was pink-faced and sweaty. Then, since we still had some time before the cold front, we went to an outdoor restaurant with a fun playground to have lunch. I checked the weather on the way there and the front had passed through the station north of us (about ten miles away), so for some reason I assumed we had a little bit of time before it got cold in our town. Ryan went in and ordered and I sat on a bench and enjoyed the balmy, seventy five degree day while the kids played. Then Ryan came out and sat by me and I turned around *just* as the flag at the bank next door hauled around from South to North. Uh oh. No sooner had I said to Ryan "Uh oh, the wind shift just arrived" than the wind picked up and the temperature dropped twenty degrees almost instantly. It was so fast my glasses fogged up. We (Ryan and I, because the kids cannot detect temperature) ran inside the covered (heated!) eating area, but the kids stayed outside to play until the food got there. Seriously you guys it was freaking freezing. BUT SO COOL TO EXPERIENCE THE FRONTAL PASSAGE!

Friday afternoon while the little kids napped, Ryan and Charley and Wes braved Best Buy to get the TV we've been planning for for the last two years after our last TV blew up (literally). He chose a smart TV since we don't have cable and watch most of our TV on Netflix. They brought it home and installed it while the kids ate dinner. Then he turned on a football game to check it out and OH MY WORD. Friends, it was like WE WERE THERE. We have not been able to read the score on a football game FOR NEARLY EIGHT YEARS. We couldn't even SEE most of the play action on our old TV (which was a 20 inch cube my sister used in college). THE PLAYERS WERE LIFE SIZED. We quickly put the kids to bed so we could drink beer and watch Christmas Vacation on it. Amazing. What a great time to be alive.

Saturday we went back downtown for a parade (it was FREEZING) and then home for lunch and then some friends came over to watch a movie on the new TV and then Sunday was spent at church for Hanging of the Greens and the usual cookie social. And things are good. It was a good break. And it was not easy to wake up to the alarm and put on uniforms again, HOO BOY, but NOT MUCH LONGER UNTIL CHRISTMAS BREAK!!!
Posted by Becca at 7:27 AM

You are my favorite because of your enthusiasm for weather and television. I love it.