The big, funny, ha ha freaking HA joke around here is that nothing electronic works for me, it only works for Ryan.  This is undeniably frustrating, as I attempt to sneak the thermostat up a few degrees in the middle of a frosty Texas January only to have the whole thing ROUTINELY collapse in on itself and die.

My favorite is when I snuggle back underneath the covers and fall asleep to the sound of the furnace filling my house with enough heat to prevent the pipes from freezing and the butter from turning to concrete on my kitchen counter only to wake up unable to feel my nose and discover that the FREAKING THING RESET AND TURNED ITSELF DOWN TO 60 WHILE I WAS ASLEEP.

Even more frustrating than that is when I turn the heater on for the first time of the season (like, for example, last night), go give Mary a bath, return to check on the (notoriously unreliable, at least for me) thermostat, discover that not only has it turned itself down, IT HAS COMPLETELY SHUT ITSELF OFF.

This is when Ryan arrives on his white horse to find me standing in the hallway, holding a be-toweled toddler and screaming G-rated obscenities at the freaking thermostat, calmly pushes the "up" button several times, then says calmly "You have to push 'hold' too."

But you know what?  It works for him.  ON THE FIRST TRY.  EVERY SINGLE TIME.

Which is why we do not have a normal dial thermostat from the seventies, one that is not possessed by a Satanic spirit WHO HATES ME.

(Also last night, when we went back downstairs after bedtime and the time came to adjust the downstairs thermostat he politely asked if I would like him to take care of it.  As.  If.)

The remote for the garage door opener is the same way.  I can push it seventy-five times with no result, but then hand it to Ryan in frustration, and BING!  Angels sing and the DOOR OPENS.

This is highly convenient because when I come home with four kids who all need to go to the bathroom and a trunk full of groceries RYAN IS NOT THERE TO OPEN THE GARAGE DOOR FOR ME.  And so then someone (or sometwo) end up whizzing in the side yard while I futz with my housekey.

We are delightful neighbors.

As annoying as this bewildering phenomenon is when it comes to appliances and remote controls, it is four frillion times annoying when it happens TO THE KIDS.

Today, it took us nearly an hour to get home from preschool pickup because I had told Charley I was going to pull over for sixty seconds for every nasty comment he made to a sibling.  I made four laps through one 7-11 parking lot.  I am lucky no one called the police.

And this was after they had a physical fight in front of a thrift store over a pair of pants I had bought James that fit NEITHER OF THEM.  And the smacking that happened when Charley wanted to use the Buddy Buck machine first and Wes beat him to it.  AND the MUTUAL BEATDOWN that I allowed to happen in front of the grocery store because I was starting to wonder if maybe I WAS THE CRAZY ONE.

I am sure there were some judgmental looks but I couldn't see them because I was disinterestedly scrolling through my phone and wondering if I'd get a 2nd or 3rd degree misdemeanor for breaking into the beer I'd just bought while still on the premises.  YOU DON'T KNOW MY LIFE, HAPPY HOLIDAY SHOPPERS.

So after all of this I came home feeling completely defeated.  It was five o'clock and I needed to make dinner.  Everyone was grouchy (INCLUDING ME).  But shortly after I got all the groceries put away and not fifteen minutes before Ryan got home it was ALL KUMBAYA AND BROTHERLY LOVE ALL OF THE SUDDEN. 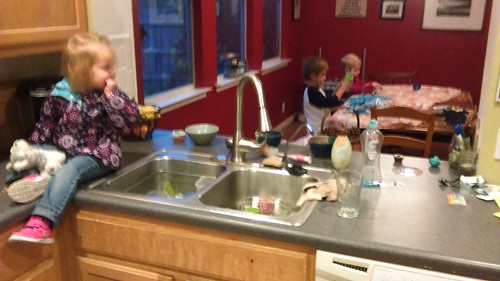 What in the everloving HELL, you guys?!

Fifteen minutes ago I had to let a kid walk home (one block) after he KICKED A BROTHER IN THE HEAD WHILE I WAS DRIVING, but now? Crafting, kindness, seasonal piano music, dinner on the stove. Just in time for Papa to come home!! "Oh look at my darling family, it is practically the set of a Little Women production, I am so happy to be back among the warmth of my--holy shit what happened to you?!" he must think as he walks through the living room of tranquility and into the kitchen to find me, hair askew, crazy-eyed, on the verge of tears, wearing the same clothes I woke up in, chopping up ground beef with perhaps a BIT more vigor than strictly necessary.

JUST LIKE THE THERMOSTAT.
Posted by Becca at 5:51 PM

I too have the problem of things not working for me but working just fine for my husband. It's a confidence-booster for sure!

Yes! To all of this! (Also, you're my parenting role model!)

I heart your posts. They remind me of growing up with my 3 brothers & one sister & all of that awesome chaos.