Well HELLO. As normally happens for even the smallest cause for celebration around here (Hey, friends, it's TUESDAY AT THREE PM, LET'S MEET ON THE DRIVEWAY FOR SOME WINE AND MUTUAL COMPLAINING!), Halloween turned into a five day funfest. It started simply enough when my neighbors and I decided that we should have a little get together for our friends after trick or treating. Nothing major, just a two-lawn, movies projected on the garage door, chili dog bar, karaoke sort of thing with a little teeny tiny keg of beer (from our neighbor who is a brewer, like, professionally). 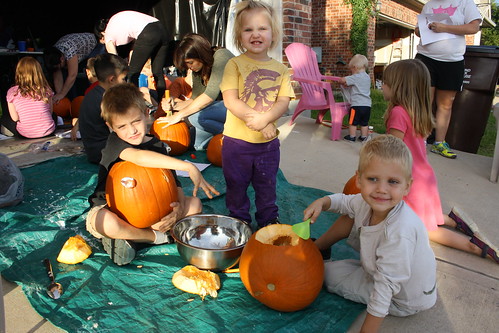 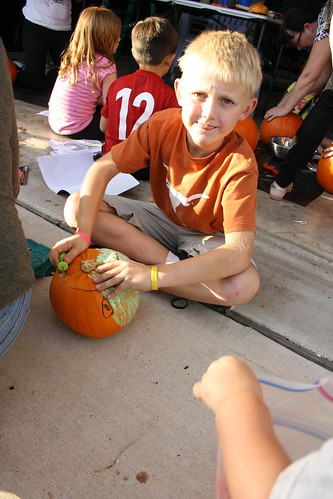 Mary went straight to work scraping all the seeds out of her pumpkin into a bowl, then dumping them all back into the pumpkin and starting again. Hashtag Montessori baby. 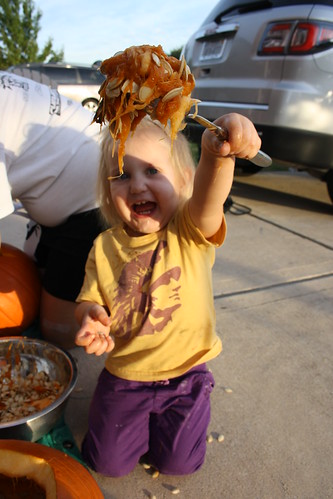 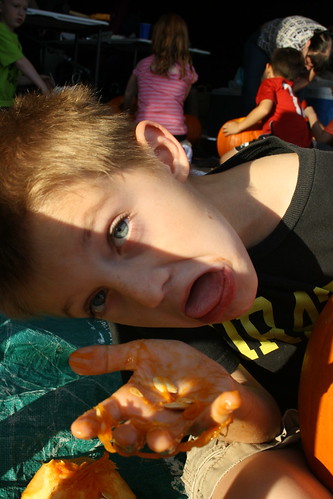 And also this massive Barbie party that started spontaneously on my neighbor's front porch. 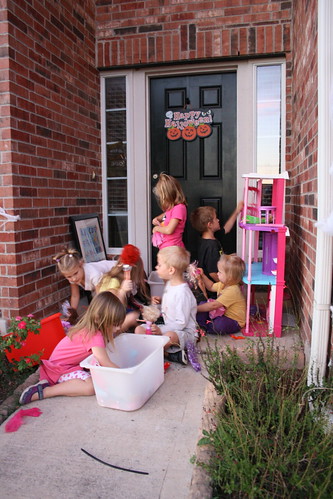 Thursday night was more of the same, minus the pumpkins, add in the fourteen kids hanging out in the retention pond across the street. Friday night was pouring and Charley and Wes had a Halloween party at their piano teacher's house, so they dressed up and headed over there through a massive downpour. 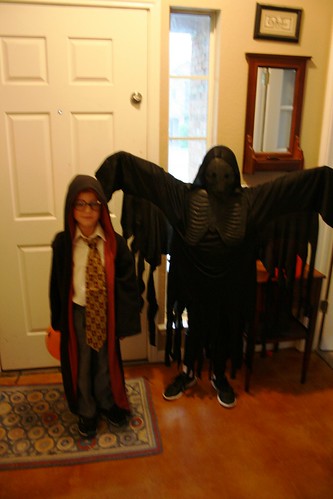 You know what makes driving a peaceful and safe experience? Hurricane rain and a four year old who is screaming because he mistakenly thought all of us were going to the party. To add insult to injury, we were not coming home to a third day of raucous neighborhood kid fun because it was pouring and instead we were going to watch Frozen on the couch and then go to bed early.

When I went back to pick up Charley and Wes I waited outside for ten minutes before having to go inside and LOOK FOR THEM IN THE HAUNTED MAZE. Which is good because I've always wanted to check out the haunted maze.

Saturday was Faculty and Staff Appreciation Day at my school's football game!

These kids, they love a Pirate theme. 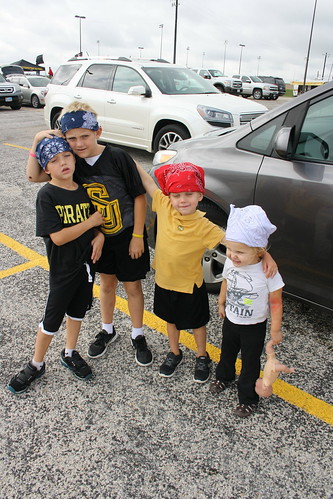 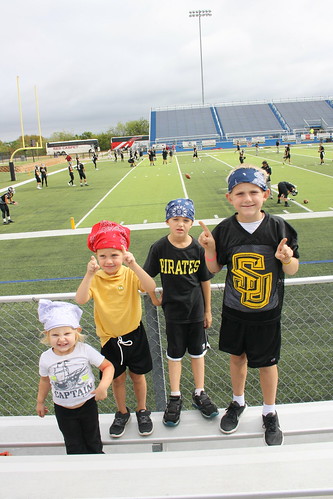 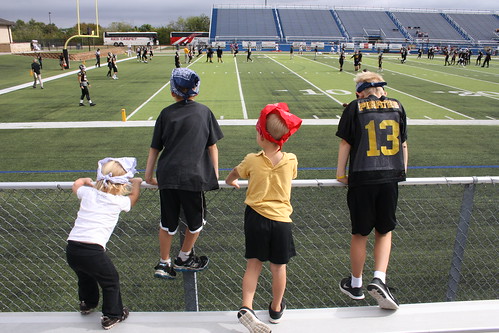 And then I got to go out on the field and shake all the players' hands with all the faculty. It was a really fun day. Especially because I could hear four little kids screaming "HI MAMA!!!!!" from the stands.

Mary got REALLY INTO THE GAME. 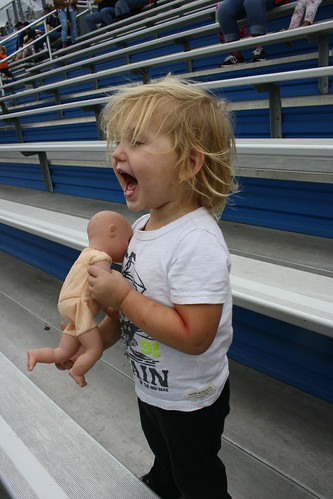 We started to leave during halftime, but then the dancing girls came out onto the field and the boys were rendered mute and immobile. 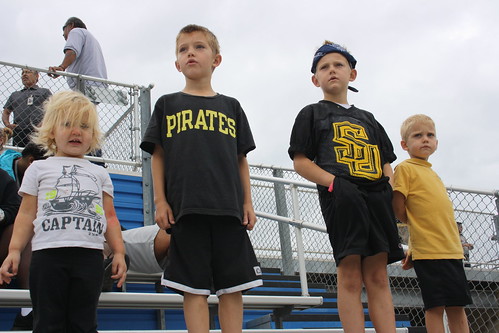 "I don't understand but I cannot look away."

After several more angsty hours, it was FINALLY time to put on costumes and assemble with the others in my neighbor's driveway. Attitudes were not awesome!! I realized later that everyone was super crabby because it was nearly six o'clock and no one had eaten anything since the hot dog they had at the football game. I only figured this out after Charley snarled something rude at an adult WHILE WE WERE TRICK OR TREATING and then came unglued every time the pack of older boys ran to the next house and he couldn't keep up. Ryan, fortunately, wondered aloud if he might be hungry, and after the next nasty remark from Charley I ran into my friend's house (we were a block away from ours) and made him a peanut butter sandwich. I gave it to him on the run and the next thing I saw was a streak of black as he ran to catch up with his friends, in a MUCH HAPPIER MOOD. Hangry is NO JOKE. The terrible mood put a damper on the pre-trick or treat pictures though. 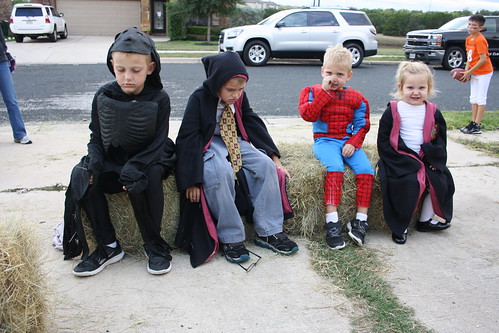 We went around a few blocks as a huge mob, with the big boys leading the way at a dead run then came back to the houses for the party, which did not disappoint. Sadly, there are not very many pictures, but there was Charlie Brown Halloween, bobbing for apples (Charley bobbed for ten apples and had to change his shirt four times), food food and more food, cupcakes, sangria, beer, ring toss, bean bag game, and tons of fun people (also: candy, or CANDY I should say, given the detritus I found on my lawn the next morning). Ryan finally put Mary to bed after ten o'clock. The rest of us finally went in around eleven. Let's just say this is the first time I've REALLY TRULY APPRECIATED DAYLIGHT SAVINGS TIME.

We laid low on Sunday then rallied on Monday for Charley's NINTH BIRTHDAY. NINE!!! 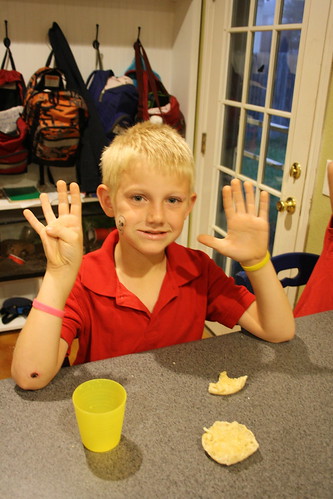 The breakfast cupcakes were leftover from Halloween. 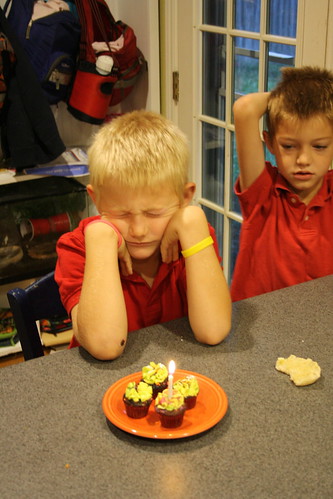 Birthday dinner was frito pie, followed by presents. He was SO SWEET AND EXCITED about the Dangerous Book for Boys, his new fishing reel, and the big stack of blank composition books and mechanical pencils we gave him (When he woke up that morning he told me he was disappointed to wake up because he'd been having a dream that he was surrounded by tons of blank writing journals and it made him so happy, so how could we not do that for him?)--he's already filled several pages of two of them with a detailed story about a night and a swami and a snake and a lot of drawings of Wimpy Kid characters.

After dinner we had our usual pack of kids over for cupcakes. 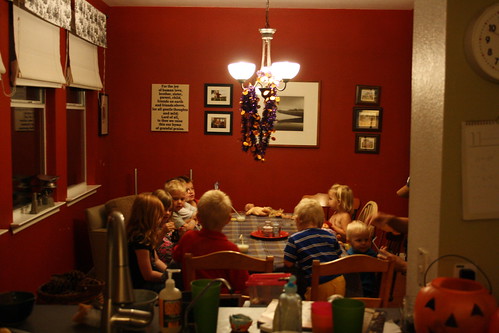 And then BOOM it was midweek with all the dropoffs, classes, labs, doctor's appointments, choir, dinners, breakfasts, lunches, laundry and other nonsense that entails. Nova was awesome last night and followed by a series I've been watching on the human brain. My cross stitch project is moving along nicely and we have rain in the forecast. After a nonstop weekend of crazy fun everyone is content to play games and read and color (*for now). I'd say things are pretty, pretty, pretty good.
Posted by Becca at 10:01 AM