So our New Year's Resolution to put seventy-thousand miles on the gray van continues apace. Earlier this week, while I was still basking in the happy mood of having pulled off a sixteen-hundred mile road trip with four children in three and a half days, my sister texted to ask if I would be interested in sharing a beach cabin with her this coming weekend. I initially said no, because Wes had a soccer game on Saturday and Charley is in third grade Sunday School which is kind of a big deal and we had already missed last week, and of course we had JUST GOTTEN BACK FROM A ROAD TRIP. But then she told me later that day that the big cabin had been rented by someone else and that she had gotten a smaller one instead. And THEN I had the perfect answer: I would take James and Mary and Ryan could stay home and do all the home stuff with the kids.

When I approached Ryan about this idea he was enthusiastic, even going so far as to suggest I not take ANY kids with me. This was tempting, but my niece was going to be there and I thought James would freak out with excitement and do that muppet thing he does, so I decided to take them anyway (It was totally worth it, when I picked James up on Friday and told him we were going to the beach he squealed "BEACH!!" and ran into a wall).

We arrived just after dark and settled into our sweet little cabin then put on a movie for the kids, dug the cork out of a bottle of wine with a car key and a steak knife, and repaired to the swing on the front porch to drink wine out of coffee mugs and listen to the surf in the distance.

Ten minutes later it was clear that the kids weren't on board with quietly watching a movie. So we took them (and our coffee mugs) for a walk on the beach. That did the trick and an hour later we were all tucked into bed and ready for lights out. Everyone slept well (surprise!) and we were out on the beach by seven thirty the next morning. We had the place ALL TO OURSELVES(except for lots and lots of birds and a massive oil and gas tanker that was lumbering out of port not a quarter-mile away, hashtag Texas) . 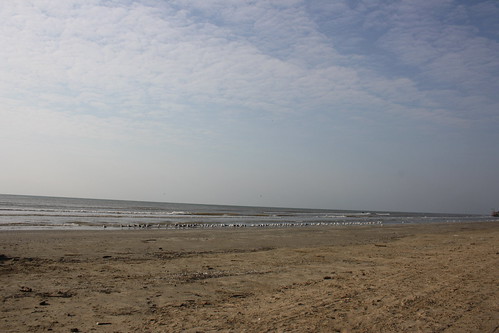 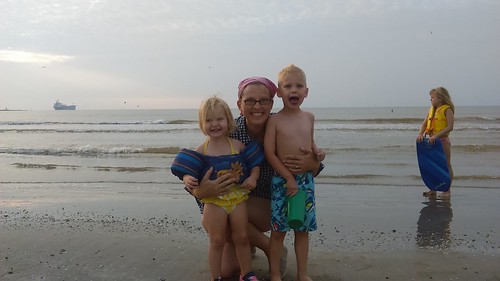 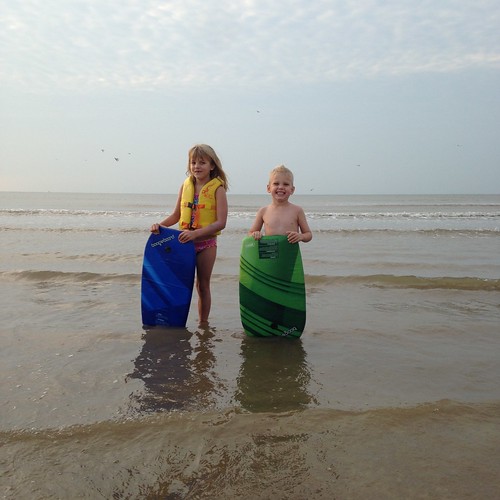 Fortunately due to a trick of the Continental Shelf, you can practically wade all the way to the Yucatan Peninsula from much of the Texas coast. The kids had tons of room to play and boogie board. They played together happily all morning long and then came in for snacks and another hour of sand time while Katie and I watched from our chairs. 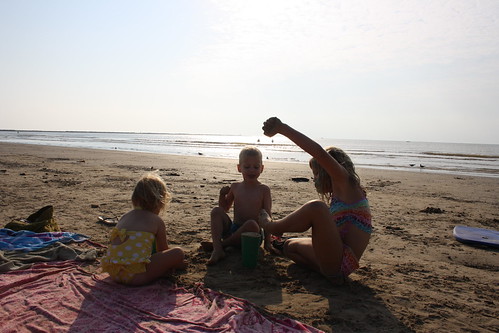 Later we went for a walk to a fishing pier a ways down the beach. Mary's hair was blowing in her face and she asked me for a "Headband, Mama" which cracked me up, so I gave her my bandana and now my life is complete. 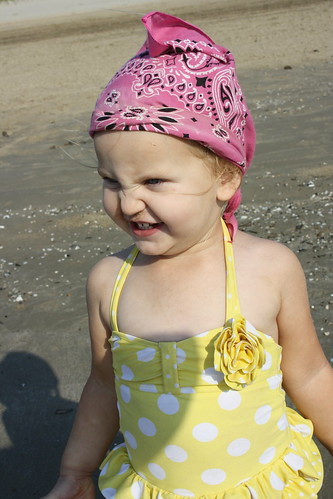 We climbed up on a fishing pier and walked out to the end where a couple had just CAUGHT A SHARK ON A FISHING POLE. He was standing there holding the shark up so the kids could see it and warned them not to get too close because if it started thrashing around someone could get hurt. 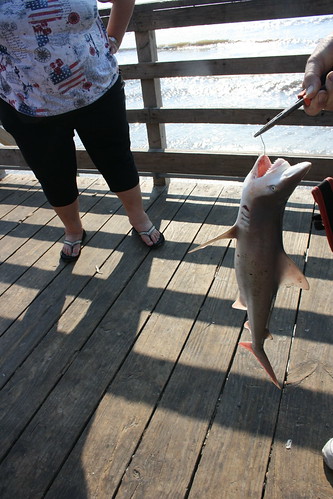 This seemed dubious since the poor thing was just hanging there from the fishing pole. The wife encouraged the kids to gather around and get a picture with the shark before the man threw it back (it was STILL ALIVE, which was very important to me). So they got in an awkward line and my sister snapped this picture just SECONDS before the shark went crazy and started thrashing around. 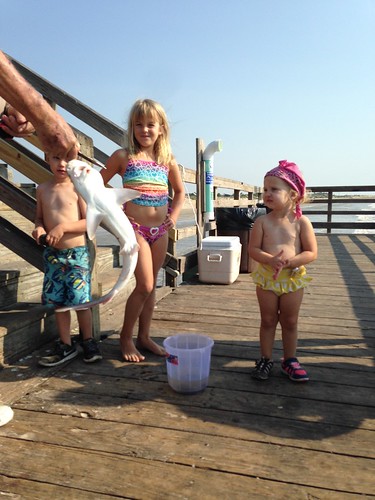 In SECONDS it had BITTEN THE MAN'S LEG and unhooked itself from the fishing line. We just stood there staring at the shark, lying on the deck, and the huge, long, bleeding scrapes on the man's leg, having NO CLUE what to say or do. The shark started thrashing around again. James shrieked and jumped up a flight of steps as if propelled by an unseen hand. Finally the man with the bloody leg grabbed the shark by the tail and flung it over the railing back into the water, where we watched it swim away.

"Are you OK?" one of us finally managed. He said he was fine, so we thanked him and walked back down the pier. James kept asking me why the man didn't cry when the shark bit him. Then he wanted to know if there were sharks on the beach where we had been swimming, which I now knew was ONE HUNDRED PERCENT LIKELY, not that I was going to tell him that. Instead I said "I don't think we're going out deep enough to be with the sharks." He did not believe me (with good reason) and wanted to know "How deep are the sharks? How far from shore? How long was the man's fishing line? Do the sharks like waves? If I stay in the waves will there be sharks? OMG YOU GUYS, I had NO ANSWERS FOR HIM. Especially not after we found ANOTHER SHARK dead on the beach between the pier and our swimming spot. YES THERE ARE SHARKS HERE AND YES THEY BITE WHO WANTS TO GO SWIMMING WITH ME?

We swam after that but not with quite as much reckless abandon as before. And then everyone was kind of tired and sunburned and ready to go in for a while anyway, so we packed it in for the day and happily traipsed back to the cabin.

Later I realized we had set up one of our instrumented towers for my hurricane project in grad school ON THE LAWN OF OUR CABIN like ten-ish years ago.

James and Mary and I came home tonight so we could see Ryan's men's chorus sing at church tomorrow and otherwise relax before everyone goes back to school (fall break was last week). Ryan and the big kids were out, so I gave James and Mary some dinner and a big bath and put them to bed.

I had just come downstairs and picked up my book when I started hearing the shark questions from the top of the stairs.

So many shark questions.

I think we can rule out "marine biology" from the list of "possible future careers for James." Or maybe it is now in the number one spot.

It was a(nother) great trip, though, and I'm already wondering how we can all go back as a family. Where we will swim with big sticks.
Posted by Becca at 6:51 PM