Lots of rain and lots of cake. A GREAT weekend.

Busy weekend over here you guys. I mean, it was supposed to be WAY busier, with a total of FOUR commitments on Saturday, beginning at eight o'clock in the morning with soccer, but since we had the giant Franken-Rainstorm that dropped more than seven inches of rain on us overnight and into the early morning hours (and because it KEPT RAINING ALL DAY) all but the most fun of those things got cancelled. SCORE!

So instead of rushing out the door to soccer, I took the only two awake kids to get donuts and drive around looking at flooded creeks. When we got home Wes had started his six-hour Star Wars marathon that lasted into the afternoon when he had to pause it so we could go to a birthday party. We also brought him a donut. Pretty much Wes's favorite day ever.

On the way to the birthday party we had to stop and admire what is normally a popular children's swimming/wading hole that had turned into a raging torrent from all the rain. 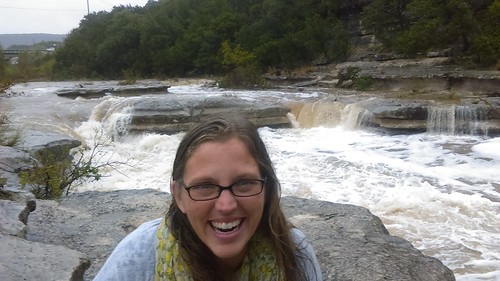 The party was a ton of fun, with cute animal games for the kids, really absurdly delicious cake and lots of other yummy treats (Wes went a little bit nuts on treats, this information becomes important later), and wine for the grownups. It was cool and rainy outside and snug and cozy inside, just the way I like it. Near the end I noticed Charley and Wes were wrestling over an inflatable Sun on the floor while James and Mary sat at a table coloring and secretly wished I could go back in time and send all the kids to Montessori school. We went home after that to the beef stew and mashed potato dinner I had put into the crockpot. Turns out we shouldn't have encouraged them to eat anymore because by bedtime Charley had the dry heaves and Wes had a 102 fever THAT HE GOT FROM OVERINDULGING AT THE PARTY. I mean seriously. Thank goodness the piano party Charley and Wes had scheduled got moved to Friday due to the rain because I cannot imagine what would have happened in the back of my van had they been allowed an hour's worth of unsupervised candy access. UNSPEAKABLE THINGS.

After they both slept it off they woke up feeling better and we went to church. As usual, while we chatted with friends in the Narthex, the kids were outside doing who knows what in the rain (Oh, did I forget to mention that Charley and Wes had a stamp-fight in the back of the car Saturday night?) 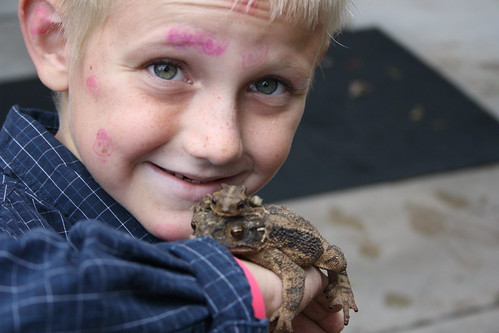 And then on the way to the car we gathered them into the pumpkin patch (the sign was folded a funny way so that to Charley and Wes it looked like it said "DUMP-KIN patch" which was so hilarious I was worried they might stop breathing.

There was a surprising amount of cooperation this year. 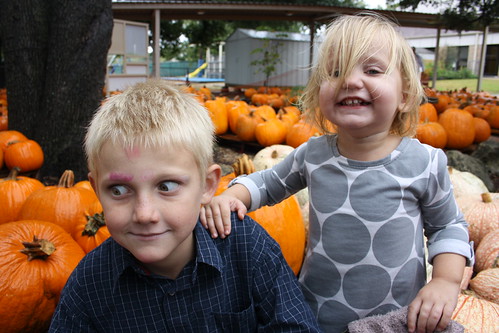 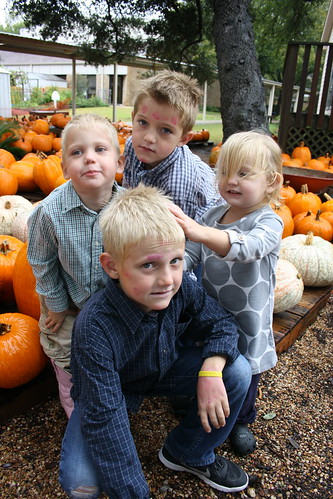 And this was our keeper. Sorry that your face is only partly visible, Third Baby, everyone is looking the same direction and no one is picking his nose, so THIS IS IT. 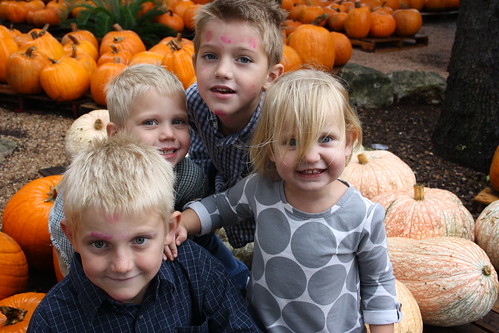 We had a relaxing couple of hours at home and then headed to another party with friends at a house in our neighborhood. The kids were having such a blast doing I have no idea what upstairs (all I know is that it was loud and that every once in a while a kid poked his head over the landing and yelled something nonsensical about BATTLESTATIONS which is pretty much the ONLY way they know how to party) that we decided not to interrupt them to eat chili with us and instead just give them sandwiches at home later on. When we got home I told them they were having PB&J for dinner and James piped up "I already had dinner at the party" and when we asked him what he'd eaten he said "I had some of the soup [chili]. Somebody helped me get it and take it to the table." HA!! IT TAKES A VILLAGE!!!!

(Wes helped himself to two pieces of pie, a pumpkin bar, and a large chocolate chip cookie at the party, but fortunately lost interest before finishing it so we did not end up with a reprisal of "I ate so much I got a 102 fever")

We left after a loud fight erupted upstairs between Charley and Wes that involved both hitting AND biting which means we maintain our streak with these particular friends of both A) Leaving an awkwardly long time after the rest of the guests and B) Leaving with at least one kid screaming. We are the BEST.

After PB&J and homework time everyone dropped off to sleep without a PEEP and I worked on my cross stitch project in my bed. It might have been the best weekend we've had in a long time.
Posted by Becca at 8:52 AM

SUCH a cute pumpkin patch picture. You could maybe photoshop out the stamps, but MEMORIES.