Yesterday afternoon was kind of crappy for a variety of reasons, the biggest reason being the kid who just couldn't get it together in the car on the way home from school then finally threatened to punch a brother, earning him a trip upstairs for homework immediately after dinner, do not pass go do not climb into the storm drain with your best friend from around the corner. He whined and yelled and came out of his room fourteen frillion times. He threw his homework folder down the stairs. He locked us out on the porch. He sprayed a brother with Windex (after cleaning off the back window of the van after I asked him not to write in the dust and he wrote in the dust anyway).

Then Ryan came home later than expected and by that time we were all stress eating cookies and watching Frozen (or, as Mary calls it, "Let Uh GO? Let Uh GOOOOO?").

I had a bottle of wine and a glass all ready to go that I never opened because *apparently* hot dogs are on the no no list post-gallbladder removal and I felt like ass.

I went upstairs and read for a while with the exiled kid, because his behavior turned out to be from some very hard things that had happened at school (which, I have a shitty day ALL THE TIME and I have never once SPRAYED YOU WITH WINDEX OR LOCKED YOU OUT OF THE HOUSE).

Bedtime was also kind of a disaster, as it can be sometimes.

Finally, it was quiet upstairs and Ryan and I were standing in the kitchen. It was after nine o'clock and we were both exhausted. I thought it might just be the kind of day where you go to bed early and hope for better things in the morning.

But then while we were standing there talking I happened to look over at Wes's hermit crab tank to see one of the crabs, THAT WE THOUGHT WAS DEAD A MONTH AGO, WALK OUT OF ITS LITTLE COCONUT HOUSE AND GET IN THE WATER DISH.

Now. We have not fed or watered this poor thing in a MONTH since we THOUGHT IT WAS DEAD. We bought Wes a fish tank and two goldfish because we felt so bad about his pets dying (one of the goldfish also died, but Fear is still hanging on. During the Children's Sermon the other day the minister asked the kids "What do you pray for?" and Wes responded, INTO THE MICROPHONE "That my pets will stop dying" OMG.).

Apparently it was HIBERNATING OR SOMETHING.

Ryan immediately filled up its water bowl and put the crab back in for a nice long drink because as far as I know, hermit crabs ARE NOT DESERT CREATURES.

I have not seen any sign of Harmless (the crab's name, the other crab, Destroy, is deader than a doornail, at least I THINK SO and hope so because he received a burial by city curbside pick up today) this morning, but I will be buying hermit crab food on my way home.

After that happy news I managed to finish the flower border on my cross stitch project, write my exam for class this week, and have a nice conversation with Ryan.

Moral of the story, don't count your chickens before they hatch. Or your dead hermit crabs until they flip upside down and start to grow fuzz. 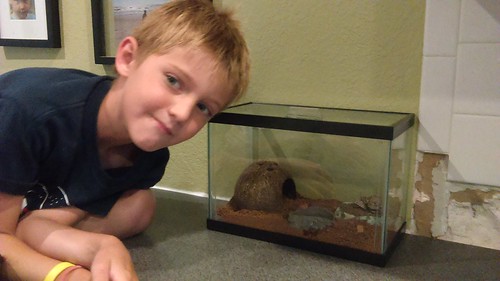 Harmless LIVES.
Posted by Becca at 7:52 AM

During the Children's Sermon the other day the minister asked the kids "What do you pray for?" and Wes responded, INTO THE MICROPHONE "That my pets will stop dying"

I have lurked here for years, and this comment has forced me to post. Too funny--but you figure, his prayers were answered with Harmless' return from the dead.

I was feeling a bit crabby myself, but this post made me smile.