A little more than a week ago Ryan texted me to ask if I wanted to take a last-minute trip to New Mexico. Since our weather is still stupid hot I immediately responded with a hearty "YES" and the decision was made. When we lived closer we used to always go to New Mexico in the fall when our weather was being stupid. I couldn't wait! The thirteen hour drive seemed like NBD at the time and we decided to leave Friday right after school and spend the night at a halfway point in Lubbock, where we met in college, graduated, got married, started grad school, had a baby, then graduated again.

The kids were SO FREAKING EXCITED. Every day last week they asked me if it was time to go to New Mexico. They also wanted to know whether people in New Mexico spoke English. And whether there would be a pinata.

Our first stop was about two hours in to our first leg to have dinner. The restaurant we chose had a secret tunnel for kids that led from right next to our table to the outdoor play area where the kids spent the whole time driving Tonka trucks and hula hooping under an oak tree. SCORE! We hoped all the activity and their full tummmies would make them sleep in the car for at least part of the next four hours, but NOPE. Not one wink of sleep between Brownwood and Lubbock where we made it to the hotel around midnight. The kids got out of the van and immediately wanted to know why it was so freezing and why it smelled so weird. Ryan and I inhaled deeply. We were home!

James and Mary and I laid on the sofabed while Charley and Wes watched TV in the other side of the suite and Ryan went to the car to get our luggage (Later Mary loudly and affirmatively kicked James out of bed. He had to sleep in a sleeping bag on the floor). When Ryan got back he found Charley and Wes watching a movie they had BOUGHT WITH PAY PER VIEW. It was an exciting moment when the bill arrived the next morning under our door for twenty dollars. Exciting because I didn't know whether Ryan's head would literally explode or if he would just have a heart attack. Luckily when we explained the part about the sneaky kids the hotel canceled the charge and Ryan hid the remote on top of the closet.

Before we left on Saturday we gave the kids the Tour of Things They Don't Remember because most of them did not exist. No one understood our enthusiasm for staring at the outside of buildings while standing in the wind. 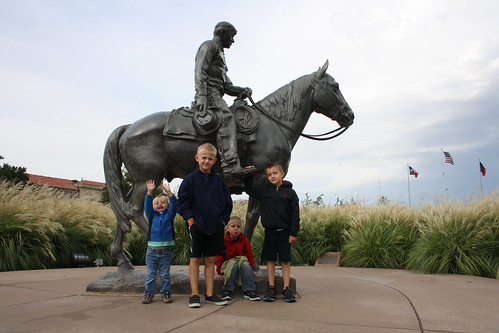 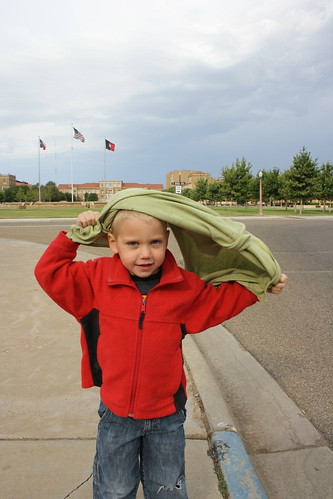 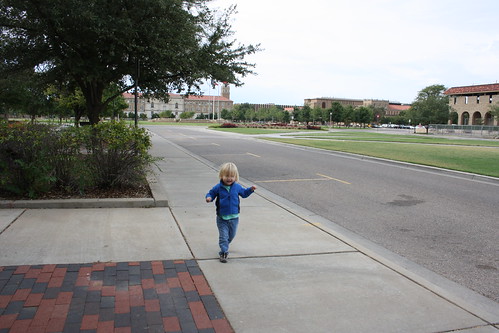 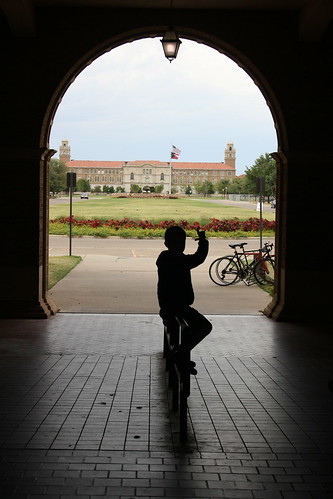 Ryan and I spent a LOT OF TIME in this classroom back in the late nineties/early 2000s. Lots of time and money and stress hormones. 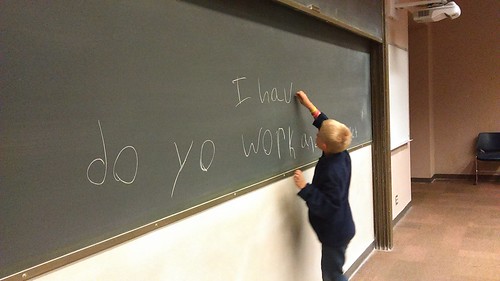 We saw the house where we brought Charley home from the hospital, where Ryan finished his dissertation, and where Charley and I were once awakened at three o'clock in the morning by a Chevy Tahoe crashing into the apartment building at the end of the street. 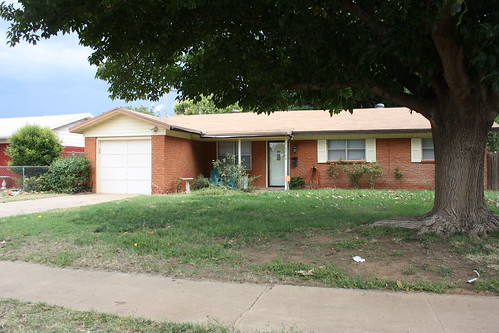 And then we had lunch at our favorite Mexican restaurant even though we now have a location in the town where we live now. It was still special because it was fifty degrees outside and felt like home.

And then it was time to get back on the road on the way to New Mexico. Spirits were high as we crossed the border an hour and a half into our trip. Little did we know that was JUST THE BEGINNING. After an hour we discovered that the DVD player wasn't working. Kids started to freak the freak out until, in a moment of inspiration, I suggested they think of a potty word for every letter of the alphabet. They killed an entertaining and inappropriate ninety minutes calling out "B is for BALLS" (hee hee hee ho ho ho) and "T is for TENTACLES" (HILARITY FROM ALL PARTIES, mostly Ryan and me). We made it to Albuquerque in about five hours and stopped for supplies at a Trader Joe's. 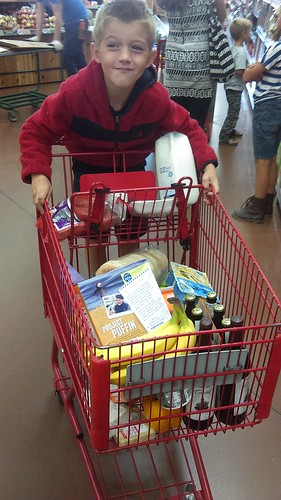 This is what thirty-six hours worth of food and booze looks like.

Our take-it-easy travel approach broke down after that because ENOUGH ALREADY and for dinner instead of an interesting cultural experience we threw a bunch of Sonic dollar menu hamburgers into the back seat and started our drive up into the mountains (after seeing not a single Breaking Bad landmark, which was sad at the time but less sad now that we're making our way towards the series finale in abject horror at Walt's behavior).

We drove through some amazing scenery (and one road that looked suspiciously like one I saw on an episode of Dateline) after dark, greeted Ryan's friend, and settled everyone in for the night in her cozy cabin. Everyone slept well and we woke up the next morning to temperatures in the low fifties, coffee brewing and a fire in the wood stove. 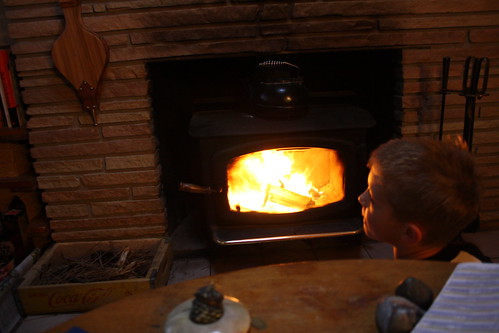 The kids bundled up and spent the morning playing in the woods. 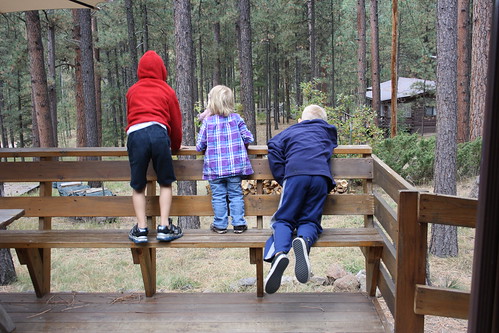 Then we went for a hike by a stream in the mountains. It was chilly and foggy and PERFECT (except for the lingering hole in my foot and slightly grouchy children (whose attitudes improved considerably after half of them started crying over NOTHING and I had a mommy meltdown and then made everyone a guilt-snack that seemed to help more than anything). And the roving bands of cows whose loud MOOING was echoing through the canyon. Between the mooing and the fog it was quite the ominous scene.). 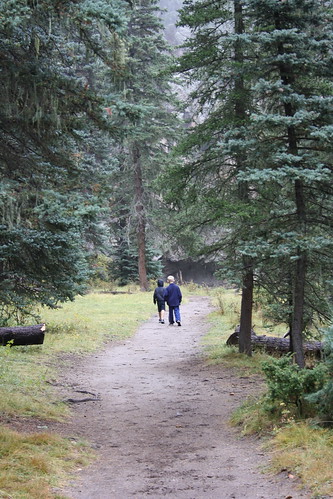 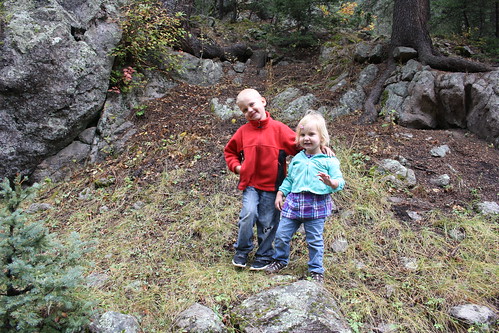 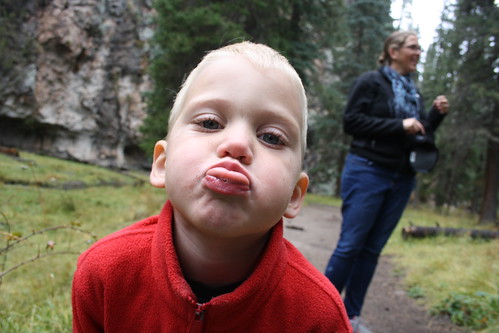 James took a picture for Ryan and me. 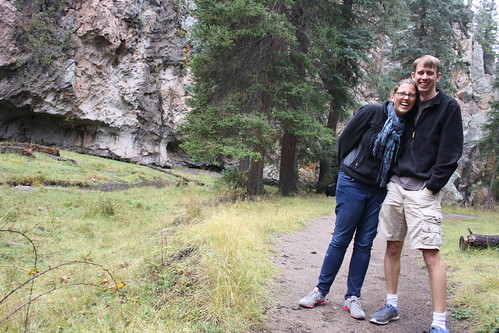 A few hundred yards later (hiking is not very strenuous or fast for us) a BULL WITH HORNS emerged from the fog and started approaching us from across the stream. Charley freaked out because James was wearing a red jacket. "JAMES! TAKE OFF YOUR COAT! TAKE IT OFF TAKE IT OFF TAKEITOFF!!!" Ryan assured him that if it wasn't safe to be on the trail because of the cows we wouldn't be there la la la. I climbed up on a rock and turned around to reassure him and was greeted by the sight of FIVE OTHER COWS WALKING SHOULDER TO SHOULDER DOWN THE PATH just FEET behind Charley and Ryan. WE WERE BOXED IN BY COWS.

"EVERYONE CLIMB THE HILL!" I shrieked in a slightly less than reassuring maternal tone. We headed up on top of some rocks and the cows disinterestedly crossed the stream and walked away to find some other tourists to scare. Too late I thought to take a picture of the scary, scary cows. 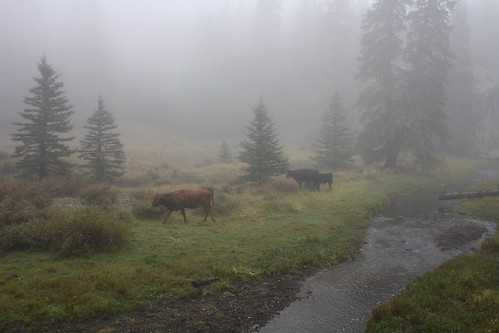 After the hike we drove a little ways up the mountain to see the prehistoric volcanic caldera. It was breathtaking. 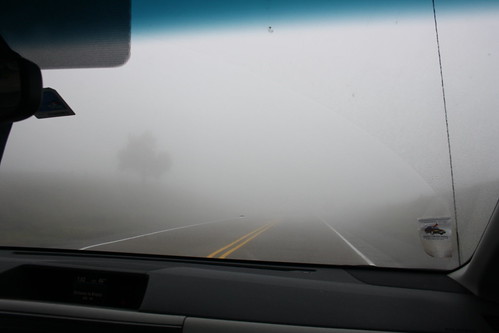 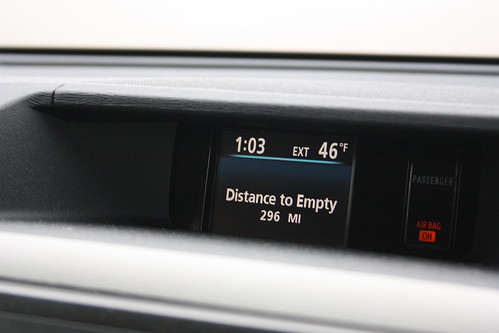 Back at the cabin Mary napped and I read a book by the fire with our hostess. Ryan and the boys all disappeared somewhere outside. Several hours later Ryan came back alone and when I asked him where the kids were he responded "They're at their battlestations" as he casually made himself a cup of coffee. He pointed them out to me, several hundred yards away on a hillside in the forest. I could barely make out part of James's arm. Sounds legit! I returned to my spot on the couch. Hashtag realvacation. 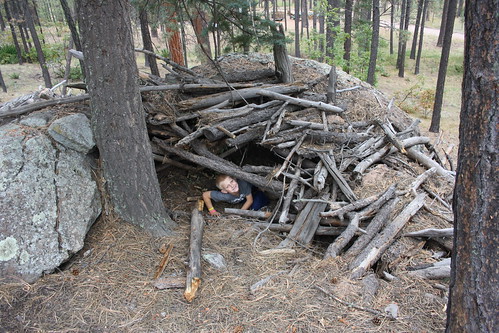 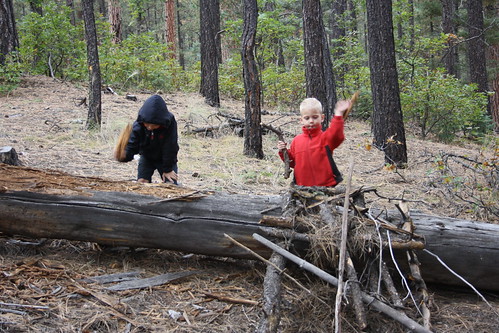 There were other pressing activities, like going for walks. 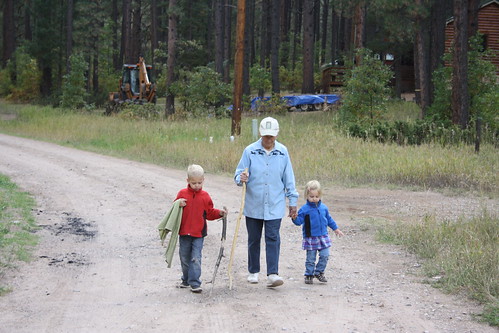 Stopping to pick up everysinglething while attempting to go on a walk. 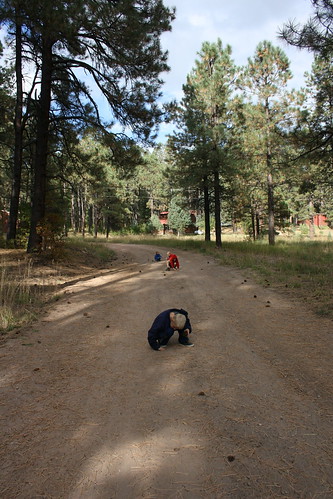 Being adorable in the woods. 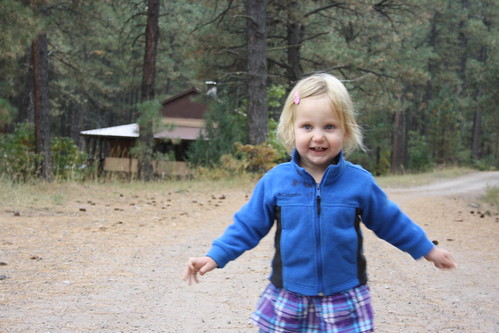 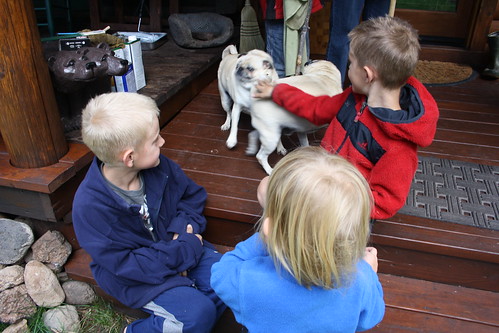 And sharing a LOAF of truffle white cheddar cheese for dinner. The kids enjoyed hot dog pennies and yogurt because we were too busy eating our delicious delicious cheese to make them a proper dinner at a reasonable hour.

The little kids went to bed and Charley joined us for a couple hours of fire time. 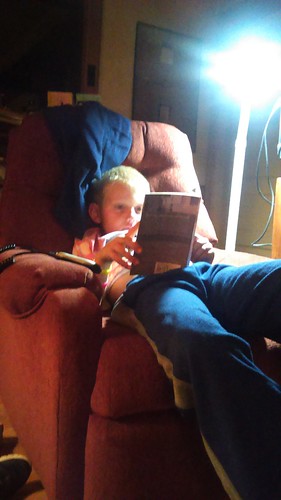 Sadly, we had to say goodbye the next morning because we had to make it back here in time for my 1:00 Tuesday class. Instead of staying in a hotel halfway back this time we decided to go for it in one shot, with a long-ish stop in Lubbock for dinner at a favorite Italian place. We took a different route out of the mountains that included hairpin turns (only one puking kid!), fascinating cliff dwellings, Los Alamos National Labs, and Santa Fe. We nibbled the leftover cheese and crackers, the kids passed around the bagels and pumpkin Joe Joes and peanut butter sandwiches. We stopped at a McDonald's in Muleshoe to use the bathroom and happened upon Farmer Happy Hour, where men in boots and Wranglers gather every afternoon for discounted coffee and Fox News, which sort of makes me sound like I'm mocking it, but I really love that part of the state and it really just made me nostalgic for our time there). We watched ONE MOVIE on the entire fifteen hour trip and the rest of the time the kids chatted happily in the back or slept (it was the Twilight Zone). Dinner was happy and fun and very very messy. 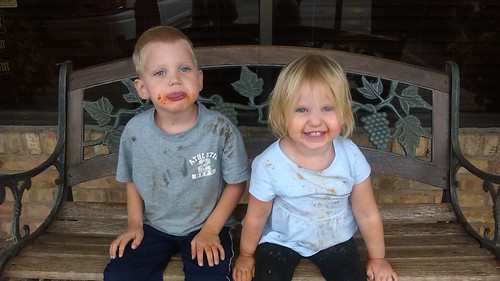 Ryan and I sang camp songs for the final three hours both to keep ourselves awake and to distract Mary from bellowing "SHUT UP AND DANCE" at the top of her lungs.

And at midnight we were carrying four comatose children up the stairs to their beds. I really want to go back right now.
Posted by Becca at 7:54 PM