*not that kind of labor

While everyone else was frolicking in pools and grilling hotdogs this last weekend of summer, Ryan and I were using a sudden and unexplained burst of motivation to knock approximately seven-thousand items off our years-long to-do list. It started Saturday morning when Ryan loaded a bunch of old ceramic tile we didn't use the first time we redid our floors when James was a baby and took it back to Home Depot. He took James and Mary with him too because getting two preschoolers and a flatbed of tile across a busy parking lot is the kind of challenge Ryan enjoys. Anyway, I was dubious but they gave him a hundred and forty bucks back. For three year old tile that we NEEDED TO GET OUT OF OUR FREAKING GARAGE anyway. MAGICAL. Also, he brought home tacos.

While he was gone I cleaned seven years of baby stuff out of Mary's closet and hauled approximately two cubic yards of stuff to my car to be taken to the Children's Home. I found a complete fall wardrobe for Mary in there, as well as enough sneakers to last her until kindergarten. I also found the baby gym (our third baby gym, since we keep getting rid of them and having to rebuy them when we decide we're not actually done with babies, this won't be happening again), the crib aquarium lightup thing, the swing, the rails for James's bed, some cloth diapers, and a broken baby gate. Just as in deep ocean sediment cores, the stuff near the top was newest and the stuff near the bottom was all Charley's old stuff. CLOSET STRATIGRAPHY! Now her closet contains: 1) clothes she can actually wear now and 2) clothes that will fit in the future and 3) a floor I can see.

(Meanwhile Charley and Wes were enjoying hours of unsupervised and unlimited access to their Kindle, which was found earlier this week during a similar cleanout of their room. It was an incredibly satisfying morning for everyone.)

Ryan was so excited by his tile victory that he spent the afternoon getting our old car appraised at CarMax. I spent that time making green chili mac and cheese and singing along with the 90s Hits Pandora station with my neighbor while all our (SEVEN) kids ran around doing who knows what. It was really a lovely afternoon. Ryan came home with the news that they wanted to give us a cool two-hundred bucks for the car, which seemed reasonable given its condition. We decided to wait until Monday to take it in, had dinner, then put the kids to bed early so we could watch Breaking Bad.

Sunday we went to church all morning then came home for lunch and then I don't really know what happened because I had to GET THE HECK OUT OF THERE because I was losing it. I went to a consignment store and got some sneakers for James (to replace the ones HE LOST at my school two weeks ago) and a winter coat for Mary and then spent some time working out and drinking iced tea and grocery shopping before returning home refreshed and ready to participate with the family. When I arrived, Ryan had the compressor out and was reinstalling all the baseboards in the downstairs bathroom (MAJOR TO-DO LIST VICTORY) while the kids milled around and did nothing in particular. I slapped together some chicken spaghetti (even letting James and Mary do the pasta breaking step, which made an enormous mess, but was fun) and then we ate a late dinner and put everyone down for a reprise of Breaking Bad and wine time from the previous night.

I kept hearing raucous laughing and smack talk filtering up the stairs while Ryan and I were putting the little kids down and when I went down to investigate I found an elaborate zombies versus aliens battle in full swing. 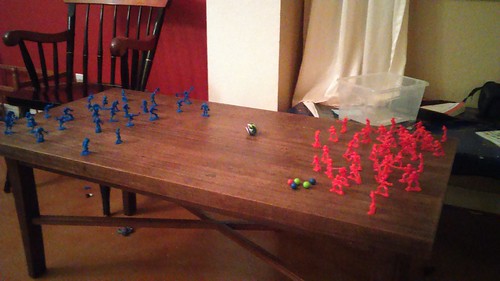 Monday morning we decided to take care of Ryan's car, but before he took it back to CarMax for our $200 he wanted to see if this other dealership, who had a "$500 more than CarMax" offer was truly as "no matter what condition" as it promised. We trooped the whole family into the place where the kids immediately decided we needed to take home this black Corvette (Corvette did not come home with us). 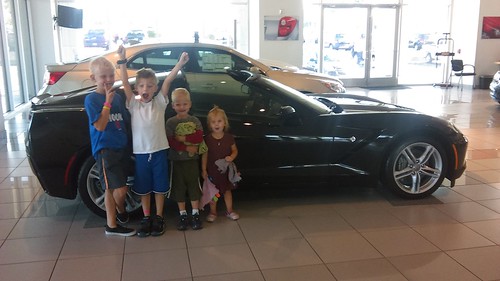 We made lots and lots of noise while Ryan talked to the dealer and then, after not that much time, he came out to tell us they were giving us SEVEN HUNDRED DOLLARS for the car. We signed all the paperwork and said goodbye to fifteen years of memories--The summer I spent in South Carolina! College graduation! Grad school! Charley and Wes coming home from the hospital! Our new house in the old town! Our new house here! Many, MANY road trips. It was a great car for a long time. And then it started overheating at red lights and leaking water all over Ryan's pants and shedding paint and refusing to relinquish items stored in the trunk. It was time to say goodbye, but Ryan was sad all the same. 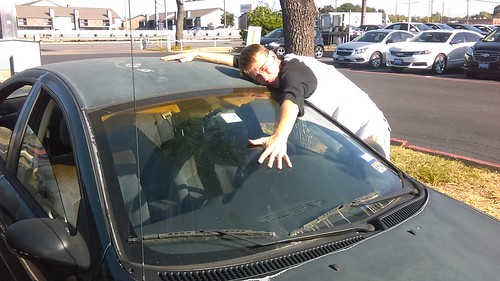 Flush with cash, we decided it was time to finally do something about the uncomfortable living room couch we both hate. So naturally, after dragging all the kids to the car dealership, we thought it would be fun to drag them furniture shopping. Fortunately we only had to go to one place. Ryan and I split the family into teams to tackle the huge store. I (team big kid) found several good contenders and texted Ryan to let him know where they were. He found some good ones too. Ultimately we decided we liked this enormous brown sectional, reasoning that there are SIX PEOPLE in our family so we need more than FOUR places to sit. I mean, it's adorable when they all sit together on our current couch, but I have trouble envisioning that happening when Charley is sixteen and Mary is eight. Ryan and I were trying to have a conversation about whether the thing would even fit in our house while the kids had a knockdown dragout battle for who got to sit in the "middle", the place where the two sections met. Finally they got so loud we had to take them all outside so we could keep talking. Outside I almost convinced Ryan to buy this super modern steel gray thing from Crate and Barrel that had a mattress-sized cushion on one end. Looking back it would NOT have worked in our house but it sure was cool.

The loud squabbling for the three available chaise lounge chairs in front of the store reached a crescendo and clearly it was time to abandon the couch search and shove some food in their mouthholes before someone's head exploded (mine). We walked everyone across the street to a hamburger place and fed them then returned to the furniture store where it somehow took forty-five minutes to put two pieces of furniture on hold and take seven bathroom trips. Mary took advantage of the complicated maze of furniture and escaped from me multiple times. There was a loud showdown over a single child-sized rocking chair. Wes had to open EVERY SINGLE CABINET DOOR over and over and over. It was very very good to get in the car.

After he dropped us off Ryan went back to pick up the furniture and somehow managed to fit an entire sectional couch IN OUR VAN. CAN'T DO THAT WITH A CORVETTE CAN YOU, KIDS?! Then he took the old broken stupid couch to a thrift store (also in the van) and picked up a recliner chair that I fell in love with at the furniture store and threatened to buy with my own discretionary account and then not let anyone else sit on if we didn't buy it with the couch. Also it was in the upper nineties, which is awesome weather for lots of furniture moving. Ryan is amazing.

We got it all in the house and tweaked the arrangement and I AM VERY EXCITED ABOUT THIS. 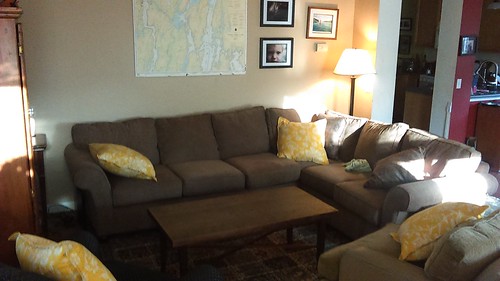 (My recliner is barely visible in the foreground left).

I made everyone some waffles for dinner and then we put the little kids to bed and Ryan took Charley fishing, which was fortunate because on the way there he came across one of our neighbors putting a nice TV console and those four awesome, practically new, yellow throw pillows you see in the picture above OUT ON THE CURB. The room looked good before the pillows, but it looks SPECTACULAR with them. Also, we didn't want to get too full of ourselves with the "We're grownups! None of our furniture came from the curb!" TV console is in the garage awaiting a coat of chalk paint and some new knobs.

WE WERE SO COMFY DURING OUR NIGHTLY TV/POPCORN/WINE TIME. We will thank the Neon every time we sit in there.

Epilogue: It was an exhausting weekend and everyone had a tough time getting rolling this morning. 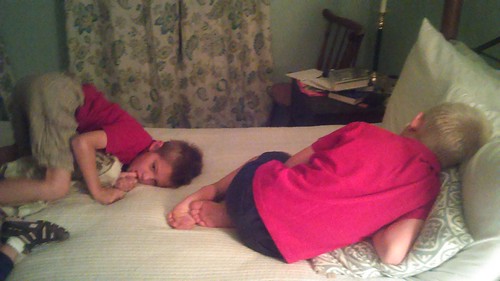