This is what I look like at work when I'm waiting for the copier to finish printing thirty five-page packets, double sided and stapled, which is apparently like asking the copier to swim across the English Channel. 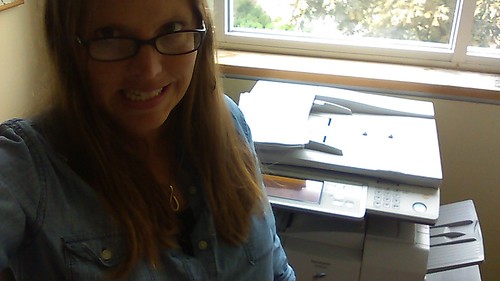 Also, after an entire Friday evening spent luxuriating on the new couch in front of the PBS Kids afternoon lineup, some therapeutic pizza time with Grandma and Grandpa, and a good nights' sleep, the kids turned BACK INTO HUMANS on Saturday. We were up and out the door on the way to the Y for some Olympic race-ellipticalling and then to pickup breakfast tacos as soon as the sun was up on Saturday morning because I've learned that bored kids are fighty kids. And kids who are segregated into age-stratified rooms at the Y childcare CAN'T FIGHT WITH EACH OTHER.

I had a nice brunch (which turned out to be my third breakfast because I am a Hobbit?) with a friend who was visiting from out of town and after that spent the afternoon painting our new free TV console on the back porch and enjoying the seasonal weather. The kids "helped" paint. I thought it was adorable and cozy until I noticed James was slopping paint all over the porch. Ryan was displeased when he came home. Oopsy.

We were exhausted Saturday night but rallied when another out of town friend came over to visit and we had THE BEST TIME. Everyone should have a friend who can talk about unmanned submersibles and sustainable gardening while you drink wine, who also knows and loves your kids and has known you since you had braces and wore a letter jacket even in the summer, ahem.

On Sunday, Charley went up in front of the church to receive his 3rd Grade Bible. I've been counting down the years by this event every year for the past few years. In five years, I'll have a kid that big! In four years, Charley will be in third grade! In three years... When I filled out the form with his full name on it a couple of months ago I got a little verclempt. HOW IS HE BIG ENOUGH FOR THIS? I mean, his head reaches my CHIN, so I know he's BIG enough, but WOW. We are so proud of him.

Also we made him dress up fancy for the occasion. Wes wanted to join in. Sunglasses were a last-minute addition. 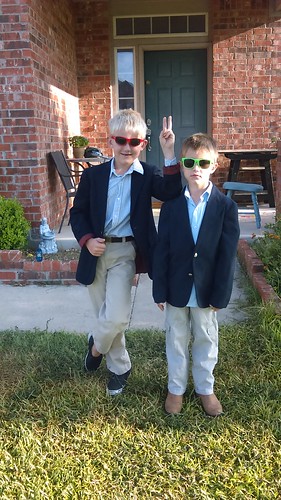 Next project, keep all 1500 of those beautiful onion skin pages away from EVERYONE ELSE IN THE FAMILY.

(Funny story, when they give the kids the Bibles they are wrapped in three kinds of wrapping paper which each mean different things and as the kids unwrap them they explain the different meanings to them. It's really sweet, but at the end the kids are left standing in a huge pile of wrapping paper and newspaper. Charley and a couple of other boys started playfully kicking at the wrapping paper while the pastor was still talking and I (sitting on the front row) could tell it was going to get rowdy so I clapped my hands LOUD, then shook my head NO when the three boys all looked right at me. They immediately stopped and looked back to the speaker. The Mom Look has only ever worked on Mary before this!)

On Monday Mary woke up with a terrible cold, so I kept her home with me. We went to an hour-long school garden committee meeting during which she ignored the giant indoor playscape five feet away and stayed curled up in my lap. Then I took her out for a cinnamon roll because it's kind of a family tradition to go to this one place for cinnamon rolls when you have a terrible cold and feel crummy, but after half-heartedly licking the sugar off the side for a few minutes she put it back on her plate and slid it over to me, saying "Don't want it." 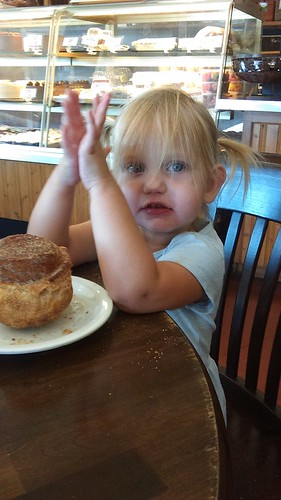 Only the threat of contracting the plague kept me from eating both hers AND mine. And then we still needed some things from the store so we stopped on the way home. I felt like a real jerk when I handed her a package of frozen spinach to play with and she did this. 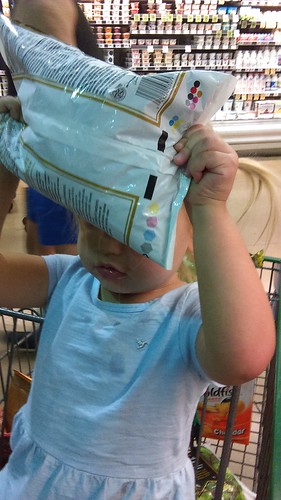 Later she would refuse to nap, refuse to watch TV, and have three potty accidents before getting carted to two school pickups, a playground, piano dropoff, piano pickup, and swim lessons. Not exactly the cozy girls' day I had hoped for when we decided to keep her home. She felt much better yesterday morning.

Tonight is swimming again and tomorrow Wes has soccer. Yesterday Charley had Scouts and Monday was swimming! But Friday! FRIDAY'S LOOKING REALLY GOOD. And this afternoon I have promised unfettered free goof-off time between school and swimming because, seriously, IT'S A BEAUTIFUL DAY GO PLAY OUTSIDE.

(Yesterday despite getting home late-ish because of my lab, the kids ran out the front door and dispersed to various friends' houses the moment we got home. This morning we couldn't find Wes's shoes anywhere so he had to cram his feet into his old too-small Vans. Later I got a text from my neighbor, "I just threw a pair of Sketchers over your fence." I love our neighborhood.)
Posted by Becca at 10:59 AM

It is really pretty..
The professional resume writing service is written in unique styles and formats that are explained on each page. They can serve as an illustration to help you understand how to develop a summary, create statements and prepare additional sections.they guarantee interviews in 30 days or they'll re-write for free.