This morning I woke up feeling a little bit sad about summer coming to an end. We have had a GREAT time and I am not looking forward to going back to dragging them out of bed, making them wear uniforms (although they look so NICE IN THEIR UNIFORMS), and dealing with homework and packing lunches. Having them all to myself has been so lovely! I love watching them be siblings!

That was at seven o'clock.

By nine o'clock it was "IF YOU KEEP STARING AT ME WHILE I UNLOAD THE DISHWASHER I WILL DROP YOU OFF RIGHT NOW."

They are outside playing right now. I was giving off a "find something to do or I will find it for you" vibe. 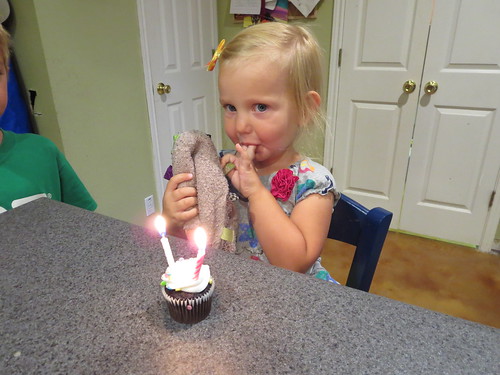 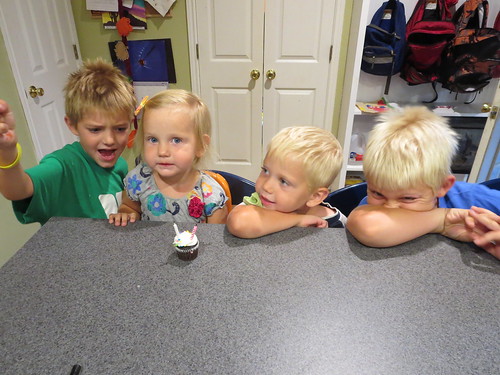 And then she and James had to go to school, which started on Tuesday for them. Late first day of school picture here: 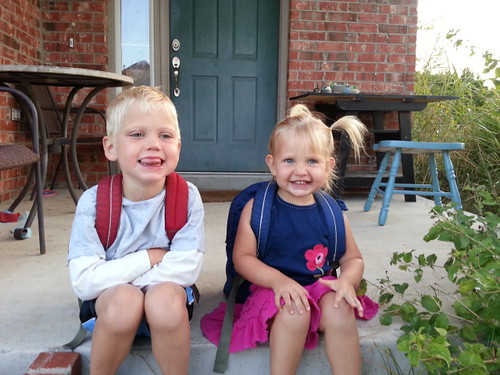 While they were at school Charley and Wes and I had a MARATHON DAY of getting everything ready for her family party and also going to the water park I'd promised. After I made cupcakes, we started at Target, where I returned eighty bucks worth of uniform pants that I'd found secondhand versions of at the school's uniform sale (for $10, which included two sweatshirts I didn't expect to buy until later this fall) and picked out presents for Mary (fall clothes, a doll dress, and magnetic paper dolls).

Then we quickly ran through Sonic and went to the little city water park. The kids went down a green tube slide that was so scary Charley said "I think I'm going to go do the lazy river for a while to calm my nerves." Then they made me try it. It was absolutely as terrifying as they said. Especially because I haven't had to do something scary like that in a very long time since I've always had the convenient excuse of being pregnant or holding the baby. We spent the next forty-five minutes doing laps around the lazy river in tubes. Then Wes went down the slides ten or twelve more times while Charley stayed in the lazy river and I talked to a friend we happened to run into. I kind of wished I had a book. BIG KIDS ARE AMAZING.

We followed that exhausting trip up with trips to TWO grocery stores for all the party supplies. The first didn't have the right size of mason jars and if I was going to make sangria WE WERE GOING TO HAVE MASON JARS.

We finally made it home around two-thirty where I spent a little less than an hour frosting cupcakes, making sangria, and putting dinner in the crockpot while the kids watched a movie half-awake on the couch. Then we got the little kids (later than normal, still wearing my swimsuit under my jeans and shirt, and with frosting in my hair) and put the finishing touches on everything.

Our wonderful Miss N and her partner over and my sister and niece joined us for dinner. I love when my house is full of fun people! We ate a feast of chicken and vegetarian tacos, cilantro lime rice, black beans, and watermelon (Mary gets her favorite food on her birthday, and every other day this summer). And don't forget peach sangria in mason jars. The kids also wanted their Italian soda in mason jars. And then insisted I cut up peaches to put in their drinks. And then James asked for peaches in his lunch today. That he was going to put in his water bottle. I might have some explaining to do later. 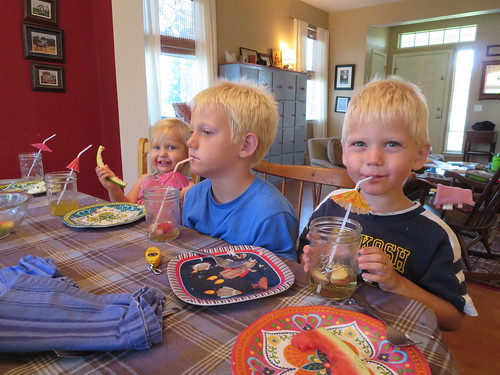 Mary was so exhausted by the time dinner was over she was resting her head in her hand. 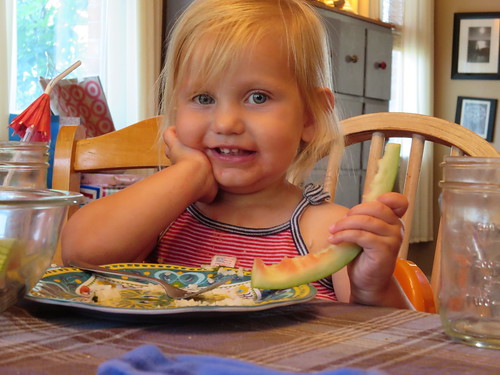 There were EVEN MORE CUPCAKES! She was so excited and happy when we sang Happy Birthday. So adorable. 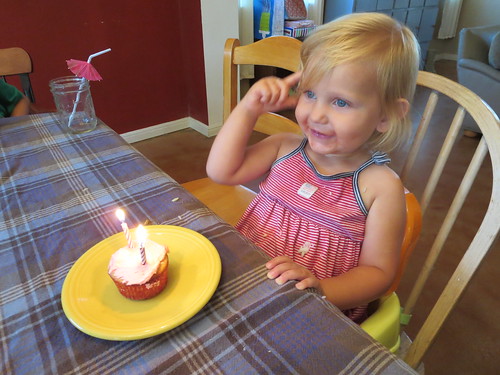 She received a delightfully girly array of presents--Miss N brought her an animal puzzle and some cute outfits, we gave her some fall dresses, my sister gave her a Minnie Mouse Book, Charley and Wes gave her an "Inside Out" coloring book that I strongly suspect they wanted for themselves. She was thrilled with everything, but the piece de resistance was when my sister brought out the NEW UH OH that her mother in law had made her. My sister's MIL made the original Uh Oh two years ago and we have been living in fear of losing it ever since. Mary COULD NOT BELIEVE IT when Katie brought out the new one. She immediately grabbed it and threw the old one on the floor (which made me a little sad even though it was dropped on god knows how many disgusting subway floors on our trip and she refuses to let me have it for the hour required to wash it). 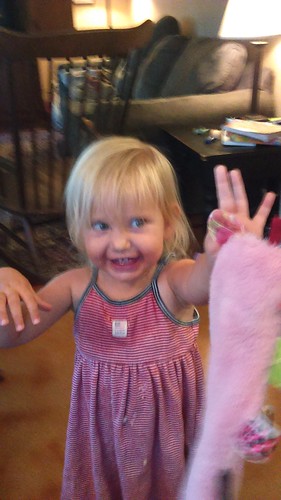 We all tried to convince her that now she has TWO Uh Oh's, but she insisted she wanted the soft, clean, new one instead of the scratchy gray one. Still, when she woke up this morning, she was clutching the old one to her face. Win?

The only sad part of the night was saying good by to Miss N and Miss M, who are moving out of state soon. Miss N has been loved our kids since Wes was two months old. She's been there for us for after school pickups, made summer fun for the kids when I was doing summer research, helped us juggle sports practices and piano lessons, and taken them each out for special days one on one. She brought the kids to the hospital to meet new siblings. They are at all the birthday parties and christenings. She was there through Charley's tough time and made that paired with Mary's newborn year a lot more tolerable by coming over and helping most afternoons until Ryan came home. Mary has fallen in love with Miss M and for a couple of weeks this summer carried around a Lands End catalog where one of the models looked just like her. When they arrived at our house last night all the kids dropped what they were doing and RAN to the car. In other words, they are family. We are so happy for their new adventure, but we are going to miss them both tremendously. I'm already wondering how I'm going to do it all myself, even though we have perfectly adequate childcare lined up in the fall. Every family needs a Miss N. 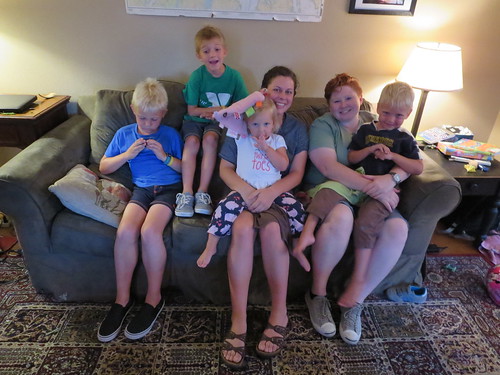 Happy birthday to Mary! She looks so big with those pigtails! What a cutie.

There is NO WAY she can be two already. Wow. And what a cutie!