I forgot about the part with the alarm clock

You know what the sucky part about back to school is? The part where I have to be awake and functional WHILE IT IS STILL DARK EVERY MORNING. Sure, the kids have continued waking up like little roosters all summer, but that didn't mean *I* had to actually be up and around until about eight or so. This morning I had been screamed at by two different kids and had to rip another kid out of the bathroom where he had unspooled an entire roll of toilet paper into the trashcan for some reason (nerves, maybe? Because this was a kid who was way past the toilet paper curiosity stage) and also had to mediate an epic battle over a pair of blue Crocs that James and Mary both wanted to wear ALL BY SEVEN THIRTY.

ANYWAY! Monday was the long-awaited FIRST DAY OF SCHOOL!

The kids were both excited to go to school and we had a week's worth of uniform laundry done and folded and sorted, so it was generally a lot easier than every other day this year is going to be. Score!

We took a bunch of really goofy pictures in the front yard to commemorate the occasion. 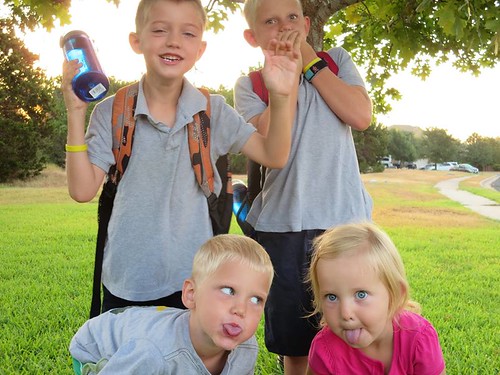 Then we dropped off the little kids and headed to the big kids' school where we were immediately greeted by a line to get onto the property that stretched a HALF MILE down the road and was not moving AT ALL. After trying to go in another way to find a parking place only to get turned around and sent back out onto the main road I parked at a McDonalds two lots away and walked through the parking lot and some woods before we were finally approaching the school. The assistant principal was out directing the (massive amount of) traffic and greeted us cheerfully because what are ya gonna do? You can walk the kids in the first day, which we did, but as soon as we rounded the corner past the cafeteria Charley took off toward his classroom without so much as a glance over his shoulder. I finally caught up with him and managed to give his shoulder a squeeze just as he was running into his classroom. THIS IS A GOOD SIGN.

We thought Wes might be a little more cuddly, but NOPE. He led the way through the labyrinthine elementary school wing like an expert, found his classroom (WELL before I could have found it), called "bye!" over his shoulder and disappeared.

I think next time we'll just let them drive themselves.

Both kids reported GREAT days when I picked them up. When we went to pick up the little kids I had to run back to my car to get something and when I got back in the lobby, this is what I saw. 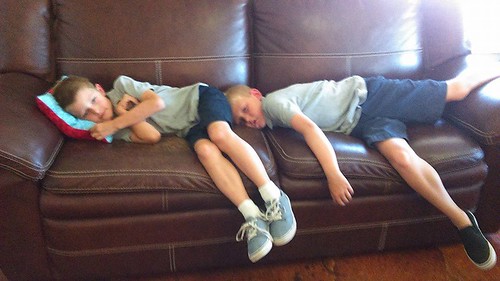 Also, it has been super hot (normal for August, but still super-annoying) and they don't let the kids out for recess because the heat index is 110F. Instead they are allowed to go out and run twice around the track to get the wiggles out. Wes said "Two laps is not enough." And yesterday he only ran one lap because his shoe came untied and he couldn't find another kid to help him tie it (teachers don't tie shoes, he said). We are all looking forward to the return of cooler temperatures. Like the mid-nineties would be fine.

After pickup we went straight to Dairy Queen. I don't know why they always sit like this but I hope they never stop. 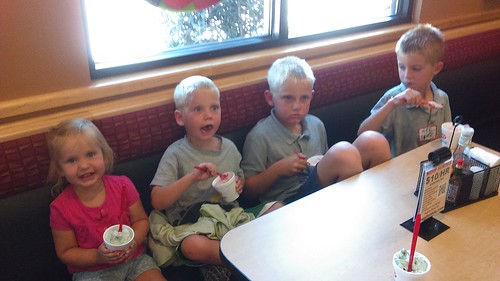 And then we went home to find THIS SURPRISE (I was still outside getting the little kids out of the car and Charley and Wes were running around asking "can I have a cookie? Can I have a cookie?" and I was like "Dudes, we just had Blizzards. And we don't HAVE any cookies." LITTLE DID I KNOW). Ryan had sneaked home from work for lunch and decided to whip up a batch of M&M cookies real quick. He's amazing. 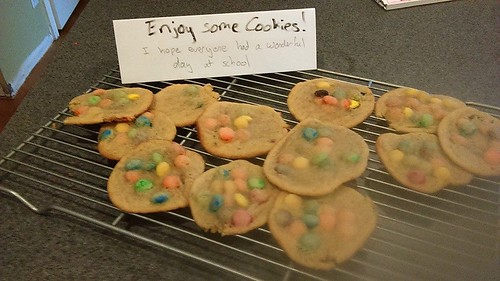 So far so good, school wise. Soon we add back in homework and swim lessons and piano and scouts though and then HANG ONTO YOUR FREAKING HATS. Oh, and yesterday I asked the kids to hold hands while we crossed the parking lot at the preschool. 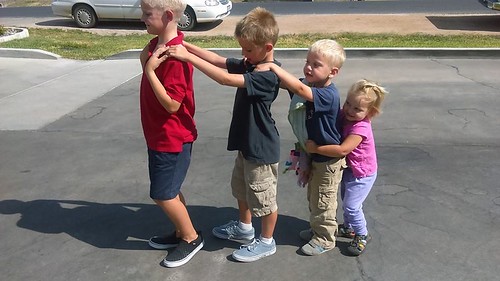 And also, Mary has been wearing underpants since Friday afternoon. I will not comment further because I don't want to anger the karma, but DUDES. We have had a kid in diapers for almost TEN YEARS.
Posted by Becca at 7:08 AM

Wow Becca! Never a dull moment in your household, that is for sure. Keep these pictures to show your kids when they are older after all the fighting over Crocs, messes, and general 4-kid household craziness is a thing of the past. Mary already looks like she is one tough cookie to roll with the older bros....By the time she's ready to bring that first date home, you and Ryan can just sit back and let the older brothers scare him off. My hat off to you lady. You're doing an amazing job!

Ok, Ryan is a keeper. I'm swooning over the m&m cookies.