Come on ride the train!

At the risk of alerting the people over at karma, I wanted to tell you something. Keep it quiet, please.

I know what a smug asshole I sound like when I say that, but before you let me take any credit for this stunning (and, honestly, extremely surprising) achievement, let me tell you our method.

No M&Ms, no sticker charts, no bribery, no threatening.

Also no coming downstairs with a basket full of dirty clothes to find a child sitting on the couch beside an impressive, man-sized turd, casually watching Thomas the Tank Engine like nothing was wrong.

After MULTIPLE experiences like that one I swore off potty training. I told other people, "DOOOOOON'T potty train. It SUCKS. Thirty bucks a month for diapers is NOTHING compared to the agony of potty training."

But Mary's teacher told us back in May that she thought she'd be ready for undies by October. OH HOW I LAUGHED once I got in the car. But then the new semester started and homegirl started going potty at school four or five times every day. And her teacher suggested again that we start backing up this behavior at home by putting her in undies some weekend. Finally, because I still have two or three shreds left of the people-pleaser I used to be, I relented and bought some undies for Mary.

The first day she wore undies we decided to have a quiet day at home, to give her the best chance at success. By eleven o'clock in the morning it was clear that we all needed to get OUT OF THE HOUSE. Fourthbaby has to hit the ground RUNNING. So I packed three extra outfits in my purse and we headed downtown in the car to goof around and have lunch. She made it all the way downtown (twenty-five minutes in the car). She made it out of the parking garage and partway down the bike trail and then when we decided to go back to our car and find lunch she made it all the way back to the hotel whose parking garage we were using, walked to the bathroom without protest, allowed me to put her on the potty, and then PEED LIKE A NORMAL PERSON.

Then I took a picture to commemorate the occasion but didn't post it to Facebook because I noticed she wasn't wearing shoes and I didn't want to get called Brittany Spears. 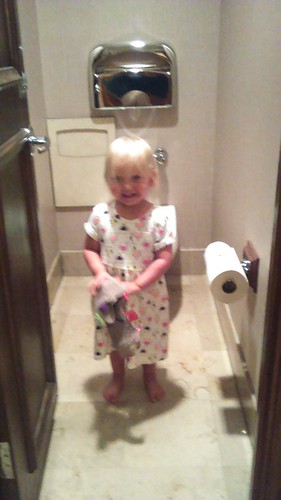 Also this was at the Four Seasons, where we parked. Baby Girl likes her bathrooms FANCY.

She then stayed dry through lunch (though she asked to be taken to the men's room about fourteen times during our meal and Ryan took her, but with no actual going potty, her shoes were on by this point), all the way home in the car, and even THROUGH A NAP, when she fell asleep in the car and we didn't want to wake her to put on a diaper.

At this point I thought maybe there was something to her teacher's assertion that she was ready to potty train that I had previously dismissed as CRAZYTALK.

We've had a few accidents here and there, mostly when she is tired and never because she was distracted by Thomas the Tank Engine and not even every day. There is a purple plastic hippo stool our neighbor gave us that I thought we'd never use because we've never before potty trained a child who was short enough to require a stool, but if that stool isn't in there she screams "TOES!!!" until we fetch it for her and then very deliberately puts her toes on it. I think that might be something she has to do at school to ensure she doesn't scoot back too far and jackknife into the bowl.

This week her teacher stopped putting a diaper on her at naptime and sent her diapers back home with her yesterday afternoon! 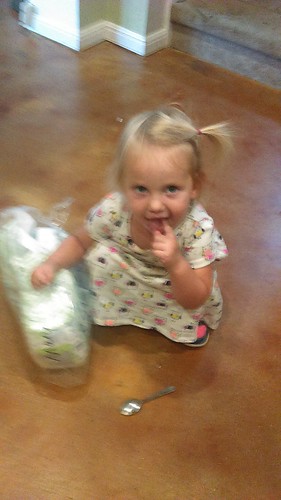 Same dress as previous picture purely by coincidence. Also because I love that dress. Owls!!

It's been almost two weeks in full-time undies and everything seems to be going well. She even tells US when she needs to go. Often she tells me in the car as we are juuuusssst pulling out of the parking lot somewhere.

Charley will be nine in November, which means we have been putting diapers on kids for nearly TEN YEARS. Sometimes we were putting diapers on TWO KIDS. And for one horrible two-month period I was buying Size 1's, Size 5's, AND PULLUPS for three different kids (also: alllllls the wines). I have no idea what to do with myself and my encyclopedic knowledge of prescription and OTC diaper rash remedies. Or that giant space under the kitchen sink where we keep all the diapers.

(And before you ask, THIS DOES NOT MEAN IT'S TIME FOR ANOTHER BABY. We have FOUR babies, thankyouverymuch. Babies who know how to make coffee and read whole novels and pee in the potty (or around the potty in some cases). But still. BAYBEEEEES.)
Posted by Becca at 11:21 AM